Some Things Even The River Can't Cure 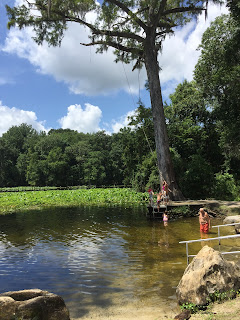 I woke up this morning and went to the hallway to turn the thermostat up and lying beneath it on the floor was a lovely rat, barely marked by death but stiff as a nail when I swept it onto the dust pan to fling into the woods.
Maurice knows that the first thing I do every morning is go adjust that thermostat and I bet she thought I'd love that rat, maybe skin it for my breakfast and give her an extra helping of Temptations to thank her for her thoughtfulness but instead, my morning angst only increased to the point where I was unsure of why I should go on, and laugh if you want but some days it doesn't take much to push me to the edge of the damn cliff.
Seeing as how there are no cliffs in Lloyd I got the broom and dustpan and did what had to be done and slung that poor thing as far towards the railroad tracks behind the hen house as I could.

Then I went to the river with Lily and her kids and thank god for the river and why I don't live on the river is pretty much a mystery to me but then again, most things are. Owen is now jumping off the rope which means he's definitely a big kid. 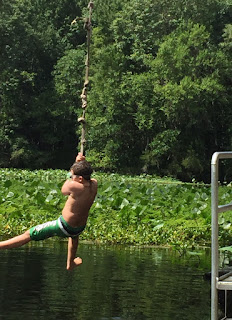 As always, it was an interesting assortment of people there today and I felt severely under-tattooed. We kept hearing something bellow and I am not sure if it was a gator or a big ol' bullfrog but one woman who was about to take off in her kayak assured me that it was, in fact, a bird which I do not believe for one second. Bird's larynx's are just not built like that.
I mean, she could have been right but she looked like a Yankee and I don't think she knew what she was talking about.
"I don't think so," I said to her.
"It is," she said, with all of the self-confidence of an ornithologist. "Although there are gators here."
"No shit, Sherlock," I said, and pushed her kayak over with my old southern lady arms which are stronger than you'd think.
Not really. I did not say that or do that.
But I wanted to. 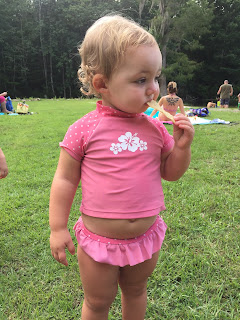 "Honey," I told her when her mama was changing her back into her clothes when we were leaving, "You have reached the apex of cuteness."
And I swear, she has. That precious little body is perfect in all regards and in all ways and I don't know why we ever put clothes on her.

So that was great fun and I am not going to say one damn thing about the Dick Tator and his speech to the Boy Scouts nor am I going to say anything about the Republican lawmakers, no, I am not (they suck donkey dicks and I am so scared and filled with anger and some of it is righteous and some of it is merely pure, red-hot-may-they-burn-in-hell anger) and I am right back where I started this morning when I found that rat in my hallway. How can there be a rat in the hallway? What am I going to do about it? How can there be a Trump in my White House and what am I going to do about it? and so forth.

Wish I could just sweep him up and sling/fling him into the bushes for the foxes and coyotes and ants to eat but I can't and Maurice, as much as she'd like to please me, cannot kill him.