Too Rich To Eat My Own Chickens 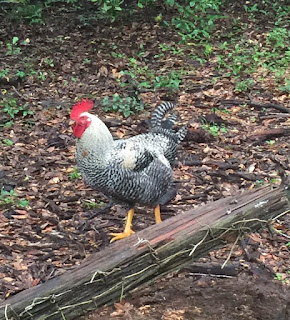 I do not know what I'm going to do about all of these roosters. This morning was crazy. Dearie slept in the tree by the hen house with four or five hens so he was right there when all the action started this morning. I opened the door for the chickens who slept inside to exit and next think I knew, four roosters were all trying to copulate with hens at the same time and Mick was going crazy, trying to fuck and chase the other roosters off of what he considers to be his woman at the same time and feathers were flying and the hens were hysterical and I swear, Trixie almost got murdered.

Right this second, everything is fine. Joe Cocker and Little Richard are scratching companionably in the magnolia leaves and Mick is just a few feet away from them and hens are scattered about. I don't know where Dearie is. Possibly hiding in the goat pen again.
I went out to clean the hen house and Trixie was hiding in there and I finally just picked her up and put her in the coop with Dottie and the babies and she's resting in the next box in there. I know she won't hurt the babies and Dottie doesn't seem to mind her being there. Hell, they practically sat on those eggs together. The sweet old lady needs to catch a break.

Too bad I can't catch and release at least two roosters. It really would make a lot of sense to slaughter two of them and cook and eat them and I know it's only my first world wealth that allows me to find this prospect one that I can't face.
And dammit! I'm not even getting any eggs from any of the new hens yet!

Anyway, I haven't spent my entire day worrying about poultry. I did go to Lily's house and we went to the branch library and to the Indian restaurant and to Publix. I haven't had much energy at all today and frankly, don't feel as well as I did yesterday or Sunday but I had a huge bowl of overly mature green beans to deal with and so I did. I sat on the couch and shelled and snapped those beans and I think if I cook them for about four hours they will be mighty fine. 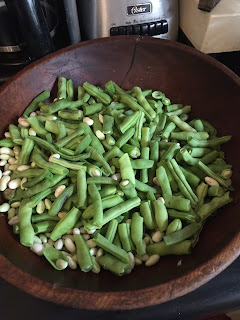 In fact, I am thinking that a meal made with those beans cooked with some nice ham and onions, along with potato salad, sliced tomatoes, and deviled eggs might be the best meal I ever ate.
Sounds like Sunday in the south to me.

Miss Maggie is going through the phase of wanting to do things herself. She wants to buckle her own buckle in the car seat and this morning when I tried to put her dress on her she yelled at me and said, "NO!"
I let her try to do it herself and after about three minutes she handed me the dress back and I got her head and one arm in it and then she told me no again and took over and it did not work the way she thought it would and Owen wanted me to see his clean room so I told Maggie's mama that she could dress the woman baby.
And she did.
And let me say that Owen and Gibson's room is as tidy as a pin and I am very proud of them because they cleaned it themselves.

Speaking of proud, it has been reported that August peed in his potty today after reading an instructional manual on the subject. 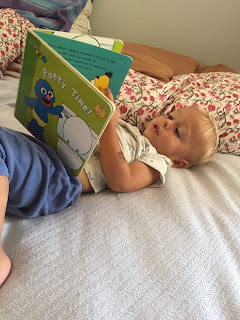 He's going to be an engineer, just like his daddy.

All right. That's the news from Lloyd on this day in the summer of 2017.

I will add that Gibson pointed out that I have armpit hair when I was kissing him good-bye and he is right. He should check out my legs.
Grooming. What a concept.