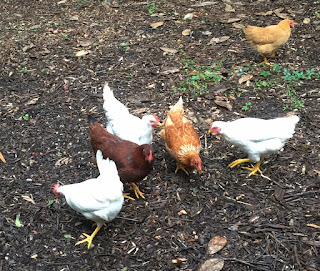 Here are some of the young hens who really need to get their shit together and start laying eggs. They are, from the left, Trinky (or Tronky), Nicey, Nancy, Nora, Tronky (or Trinky), and Honey's there in the back. The other hens which have not started laying yet are Owl and Lucy. And Darla. But I've had Darla for forever and she's never laid one egg as far as I know. She is the tub-mate of Dottie who is now raising her first hatchlings. There's also Violet, my little Banty, and Camellia, both of whom do lay, and Trixie, who hasn't laid an egg in forever and ever.

I let Trixie out of the coop where I put her the other day so she could catch a break from the roosters. She hung out with Dottie and the babies for a day or two and then indicated that she would like to leave by hanging out near the door and I let her out and she did scratch around yesterday but today she's spent most of the day in the hen house in a nest. I went in and found her and scratched her head and stroked her feathers and gave her some watermelon which she ate with enthusiasm. Poor old girl. I keep thinking she's on her way out but then she rallies and proves me wrong again. This heat can't be helping her. And it's about to be molting season and all of the chickens will lose many, many feathers and grow back new ones and while that's happening, even the most regular of hens grow less productive and I'm wondering if I'm going to get any real egg volume until it cools down in the fall. 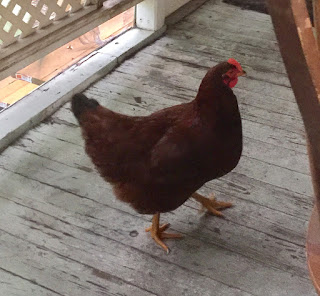 I shelled a bunch of peas that I picked today and when I finished and came out to the porch, Camellia and Nicey were both hanging out, hoping for treats. Now Camellia comes onto the porch every day, sometimes several times and I have to admit that I've been a bad, bad chicken-keeper and have been giving her a few cat food kibbles because she's such a sweetie and she was Kathleen's and she lays me eggs. Of course this only encourages her and yes, she does poop on the porch but it's not so bad to clean up. But I'd never seen Nicey on the porch and yet, here she was. Did Camellia tell her about the cat food?
I wouldn't put it past her.
And doesn't that hen look old enough to lay eggs to you? She has become quite a dark shade of red and with those black tail feathers, I think she is lovely.

I have noticed that Dottie, when I go out to feed or water her and her babies, raises up her tail feathers and spreads them out so that she looks more rooster-like. She spreads out all of her feathers, actually, and I am sure this is a protective reaction to perceived threat. She wants to look like a dangerous bad-ass to any one or any thing threatening her children. I try to take them treats every day because they can't really get much green goodness in that coop. Yesterday I took them some weeds from the garden and they scratch through the roots for whatever might be clinging to them. They also love fruit, of course, and I give them some of that daily too. Right now it's watermelon but they really do love it all. She checks out what I bring them and if she likes it, she chip, chip, chips to her babies to come and join her. The sound she makes is very much like the sound a rooster makes when he is tidbitting some found delicacies for his ladies.

Dearie is still making himself scarce although he comes back to roost at night in the tree and has now collected almost all of the youngest hens to roost with him. He is a sly one. And a handsome one. And so far, they are doing fine in that tree. Mr. Moon says he wants to build Dearie his own home for his own flock and maybe he will. That man has a lot going on and hen houses don't just erect themselves.

Speaking of Mr. Moon, he brought home a nice snapper and filleted it for me and I'm going to pan fry it and cook some stone-ground grits and stewed tomatoes and a little salad. He gave all the scraps of the fish to the chickens and they are happy as they can be to eat them. Very little goes to waste around here.

I worked in the garden some today, picking and weeding and then I pulled the largest tomatoes which are neither blooming or fruiting. They are done, the cucumbers are done, the squash is all but done and some damn vine-borer seems to be killing my gourds. The edamame are slow to swell in their hairy pods, but I am watching them. The black-eyed peas and cream peas are still podding up with nice goodness and I'm still getting rattlesnake beans. I pulled a rosemary bush out of the garden today that was bigger than an end table but half of it was dead and I have another, even bigger one right beside it. I used a little of the hen house hay with poop in it to mulch that spot. The poop is too hot to plant in it right now, but by the time I plant my collards, it'll be just about right.

We got a nice rain this afternoon, I have worked outside and in, and I have nothing whatsoever to complain about. I took a rare Ativan last night before I went to bed and I don't know whether it was that or merely the ticking across of some distant planet but I have felt mostly at peace today as I did nothing much.

It looks, from a distance at least, as if the current administration is falling apart faster than a nice, fat pork shoulder falls apart in the crockpot and I don't think that there's enough barbecue sauce in the world to make that shit edible.
Or credible.