The Finest Journey You Can Imagine 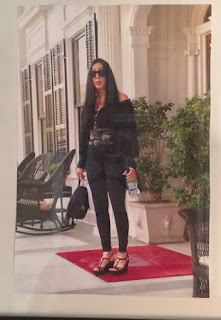 Cher! You may say. What the hell are you doing on Ms. Moon's blog?
Well, I will tell you. Last night Mr. Moon and I stayed in Macon, Georgia and instead of staying at a Day's Inn or a Travel Lodge, we went for the big adventure and stayed in an old inn downtown called the 1842 Inn which was, supposedly, the only building in Macon that Sherman didn't burn when he made his way down through Georgia, and on the wall of celebrities, there was a picture of Our Lady Of Perpetual Cherness.
Also this note. 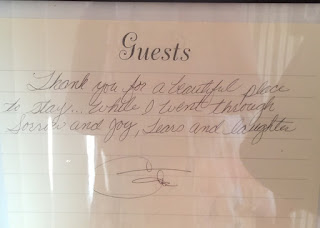 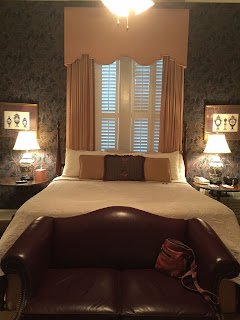 Lord, I feel like I've been time-traveling, universe-traveling, and all-American automobile traveling.
And I have.

Two nights ago we were on Black Mountain, visiting Vergil's family where we ate supper with his sister and her husband and their three beautiful children and his mama and stepdaddy at his mother's house where the view over her garden looks like this. 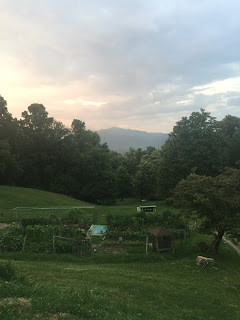 And then that breakfast the next morning at the Five Points where you can take your biscuits and tomatoes and make a sandwich of them and where I cried and we said good-bye.
We drove all day long, not having a plan or a clue and stopped at several places to look at antiques and junk and stuff and it was fun and then last night we stayed there at the 1842 and this morning we had our complimentary breakfast in the courtyard of eggs and bacon and stone-ground cheese grits and all sorts of amazing foods. 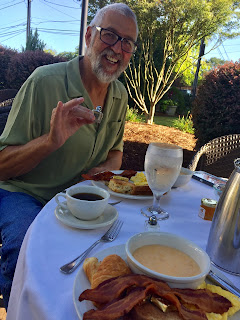 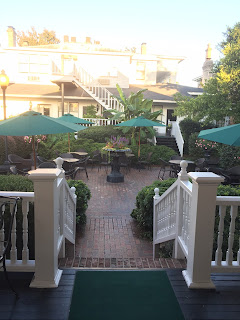 And then we finally dragged ourselves away from the room and headed south on every tiny road in Georgia and stopped in one tiny town to buy baby chick starter at a feed store and at another tiny town where we had a late lunch which I will remember longer and more fondly even than that breakfast.
We passed a little place called Josie's. 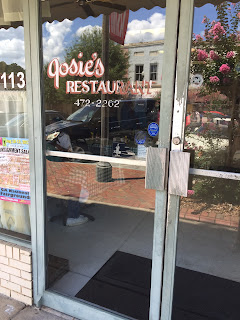 We turned around and came back and parked and went in and damn. Just...damn.
We got in line and were served cafeteria style. Our choices were almost too much to bear. Barbecued pork chops, fried chicken, fried fish, cabbage, greens, mac and cheese, mashed potatoes, chicken and dressing and cranberry sauce, green beans, peas and carrots, cole slaw.
Here's what we both ended up with. 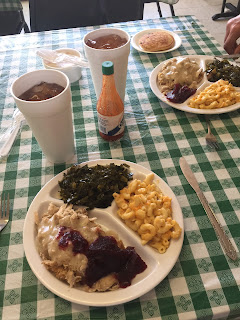 Good GOD, y'all.
Montezuma, Georgia. Josie's restaurant. They close at three and have to lock the door because people still want to get in. 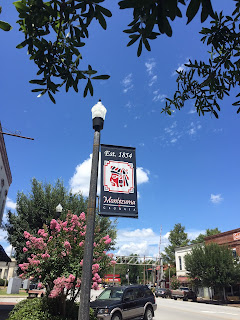 Then we drove down every other two-lane road in Georgia and I read and read and read to Mr. Moon and fell in love with Duane's Depressed for about the tenth or maybe twentieth time and we bought lottery scratch-offs and I won fifteen dollars and we realized that the south is absolutely filled with gorgeous old houses and they are still standing and still proud and straight and life is still being lived in them and we saw fields of cotton and corn and we finally got...home.

And here we are and I'm exhausted and I think I've brought home Jessie and August's cold but I had so much fun with them and there were so many kisses and so much sharing of food and wah-wee (which is what August calls water) that it almost feels like an honor to have gotten this little virus.

Do you think I miss this guy? 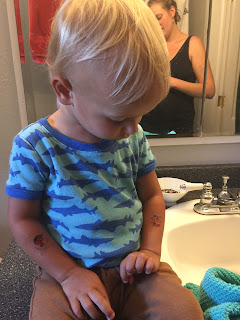 That's him getting his pirate tattoos that I bought him.

I miss him so damn much I can't tell you.

But I also miss my Owen and my Gibson and my Maggie and here we are, back in Lloyd and I'll get my hands on everyone soon enough. We seem to be missing a few chickens including Dearie which sort of breaks my heart but maybe he'll show up tomorrow. Dottie has only let me see one of the babies and it's darling.
Maurice hasn't come around yet and I'm sure I'll have to pay for my abandonment. Jack, of course, has come in to eat. I think he eats in the kitchens of at least two other neighbors so he hasn't suffered too badly.

And here we are. I have to say that I think that perhaps this was one of the very best vacation trips of my entire life. Maybe the absolute best one that didn't involve Mexico. 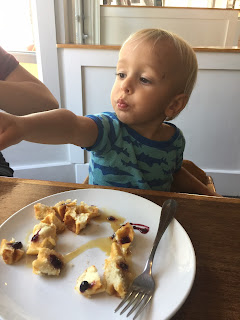 Until he got his waffa.
And there were hipsters and country folks and ladies serving up food whom I know go to church every time the doors are open, wearing aprons and taking care of business.

And I haven't even talked about the karaoke.
And I probably won't. Except to say that no, I did not sing.