Elvis is still hanging on. He spent a goodly portion of the afternoon under the kitchen porch. This is a popular chicken hang out so it wasn't that unusual but he wouldn't eat anything. A little while ago he came out and I made up some more pancake soaked in olive oil and fed him little pieces which he did take but it's hard for him to swallow. The hens hang with him, pecking at the gnats gathered in his wattle and his comb. I remember the gnats tormenting him last year and how bad he looked then. I wish he only looked that bad now.
Mr. Moon is leaving tomorrow to go fishing with some buddies off of Dog Island until Saturday. I hate to think of Elvis dying on my watch. Hell, I hate to think of him dying on anyone's watch. If he does go, I'll have to dig his grave and I would want to do it next to Pearl's grave, right next to where I buried Eggy Tina. I cried this afternoon when I was talking to my husband about Elvis. About how helpless I feel. About how sad I am. I know I keep saying it but he's just been such a magnificent rooster.

When Owen and Gibson were here the other day Owen had a bit of a problem with the idea of Elvis's wives marrying Mick. All I could say was that chickens are not quite like humans and do not marry in the same way. But of course, there is part of me that feels the same way. Elvis has been such a good husband to the sister-wives. Attentive, gentle (except in his love-making which is brutal by chicken nature itself) and generous in his tid-bitting. When he was trying to eat his pancakes today, the hens rushed him, confused as to why he was not sharing. Some even tried to snatch the food from his mouth, which he has always allowed. And of course, he has always been such a kind rooster to us humans. Never once pecking a man, woman, or child. 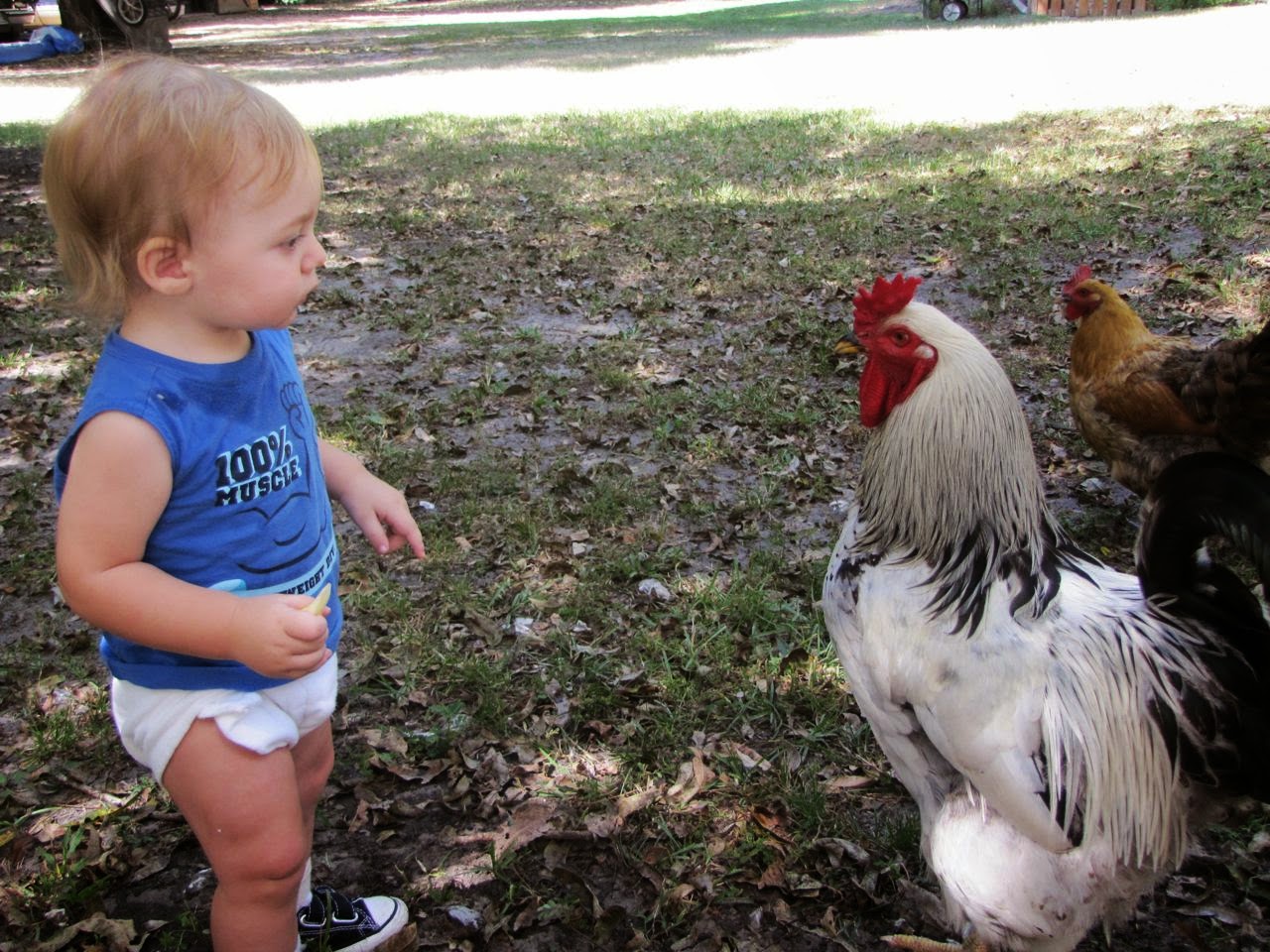 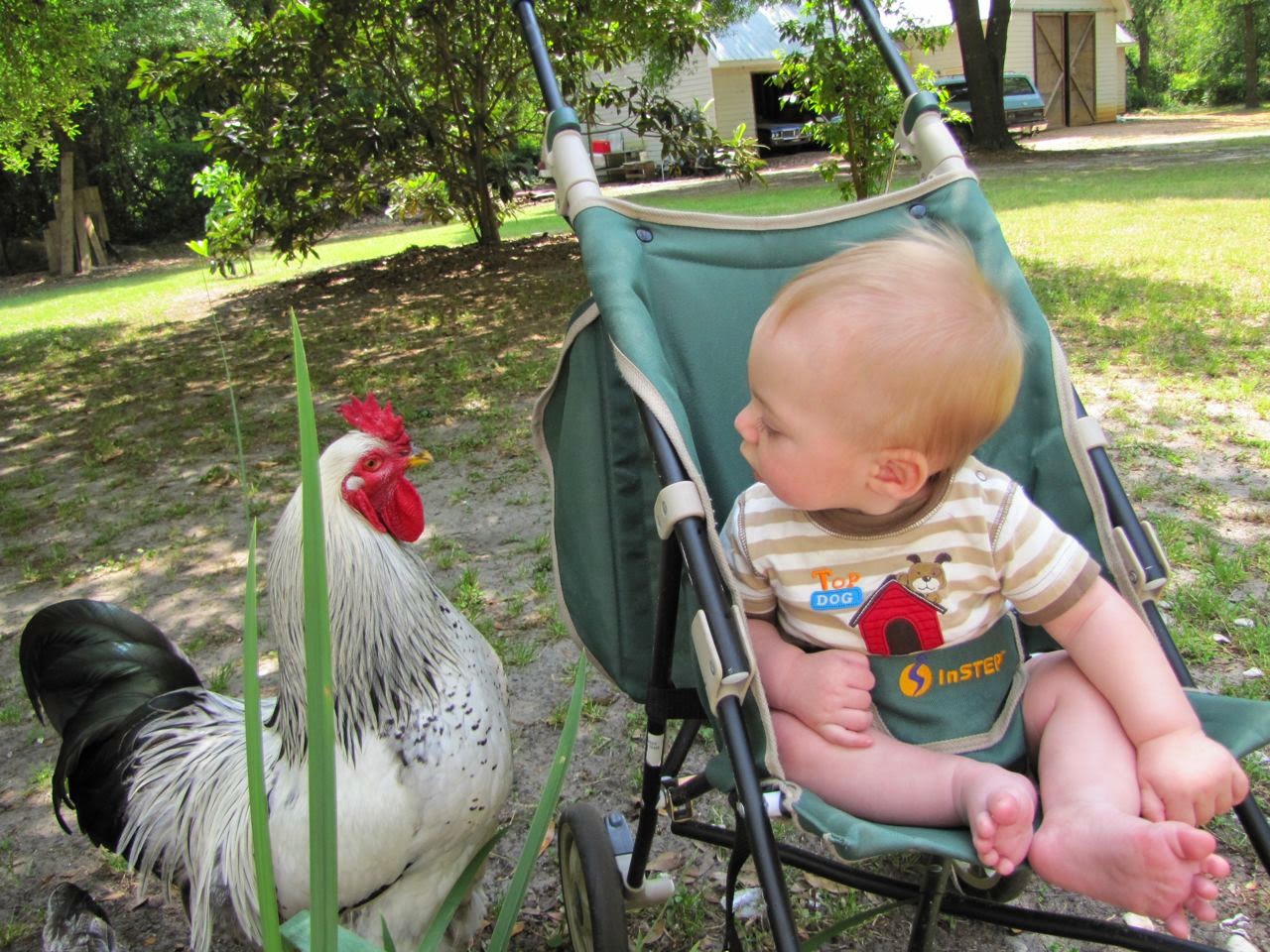 Curious and industrious, proud and pretty. He's been a part of Owen and Gibson's life since they were born.
He's been the best rooster ever. And I like to think that he's had the best life any rooster could have. Beautiful hens to tend and love, a big yard to keep dominion over, tasty bugs and fresh green shoots to scratch and eat. Kindness and chicken feed from his humans, respect from all who know him.

And I know he's "only" a rooster but I will tell you this without reservation- his death, whether it happens tonight or in five years, is going to be harder on me than the deaths of Buster and Dolly together.

Well, it's getting towards night. I've made a huge number of chocolate chip, oatmeal, raisin, pecan cookies for the fishermen. I have a venison meatloaf in the oven. I've had a headache all damn day long. Well, since I took my walk. I think it's probably sinuses. The pollen is getting to everyone. There are so many birds at the feeder right now that whenever I stand up to go into the kitchen and startle them, it sounds as if the Rockettes are doing an umbrella-opening routine. Mr. Moon is doing something to his trailer or boat. I am not sure which.

We shall see what this night brings. We can have hope and we can have acceptance. We can have appreciation for a fine creature who has brought me such joy for almost six years.