I'm Bitchy. So What Else Is New?

I haven't felt like writing today or doing much of anything although I have done things. I went to town and Lily and I went to Whole Foods with Gibson who was adorable and we ran into a woman I used to work with a long time ago and I couldn't remember her name to save my life until twenty minutes later when of course it was way too late. And she told me that her husband has three kinds of cancer and I was just like, "Oh, darlin'," because I couldn't remember her frigging name and I felt so bad.

I KNOW THAT, GODDAMMIT.

I also know that a friend of mine has suggested Reiki for my anxiety/depression and I am sure that Reiki helps some people but so does homeopathy and I can't go there either. I remember once my friend Sue got Reiki while she was staying with me after she got chemo, the Reiki to help her with the side-effects of the chemo and while this group of loving people were Reiki'ing all over her, she had to jump off the bed and go puke and then she asked them to leave.
No, no, that is not a good reason not to believe in Reiki. I know that.
I'm sure some people can direct energy. I've seen people do it but not in that way. 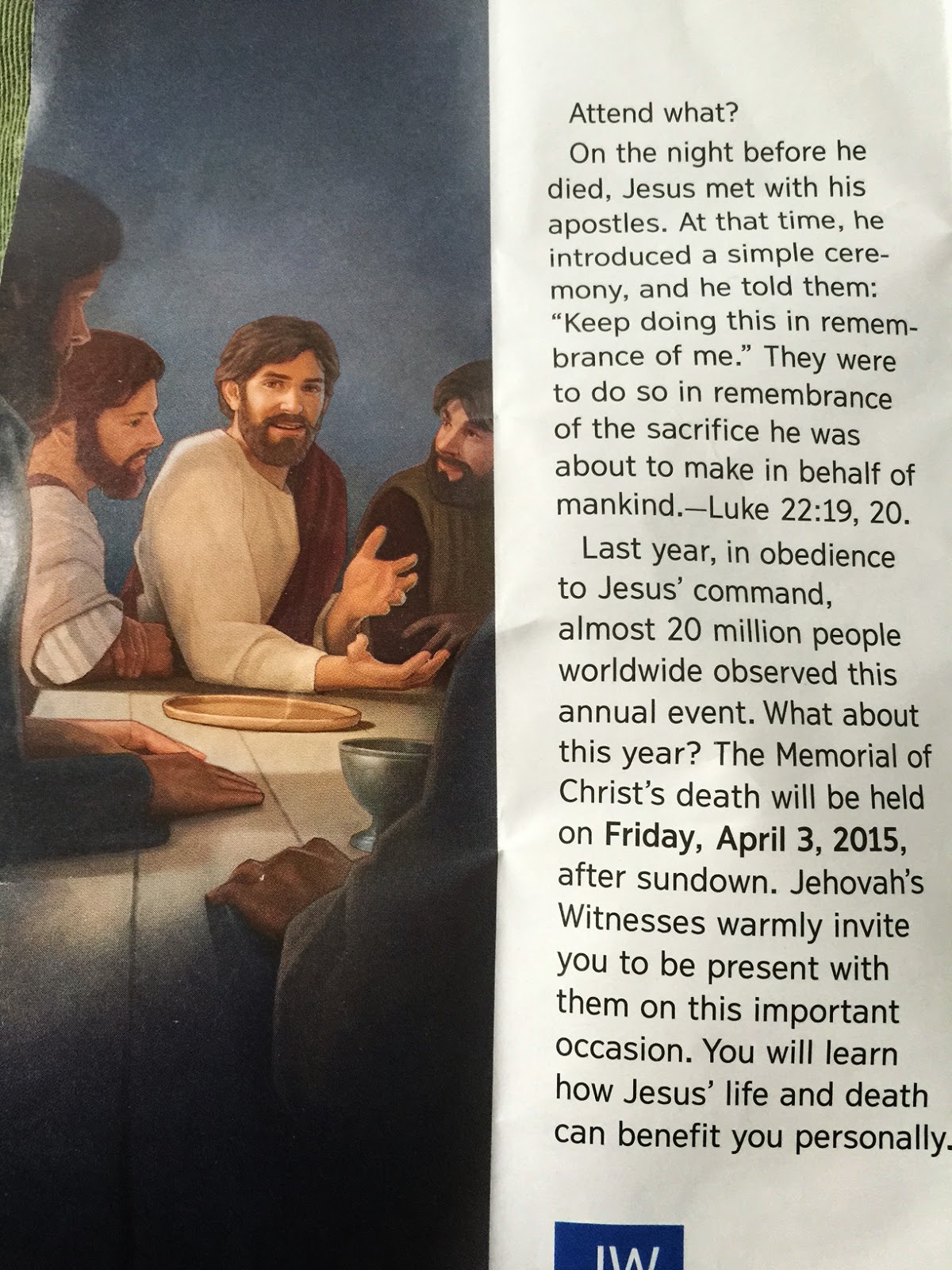 So I got another damn flyer from the damn Jehovah's witnesses in the screen door. What gives these people the right to come into my yard to leave material that I don't want in my door?
Oh yeah. God told them to do it.
Personally, I do not want to learn how Jesus' life and death can benefit me personally, in fact, it seems rather tacky to want to benefit from anyone's death unless it's a rich uncle whom no one liked and you weren't close to and by some miracle, he left his entire fortune to you, maybe because your mother forced you to write him a thank-you note when you were eight years old and he cherished it, unbeknownst to you, all these years because he was so mean that no one else had ever once written him something nice.
Like that.
Otherwise, no.
And in that picture, Hippie Jesus (or maybe it's Hipster Jesus) looks pretty darn happy for someone who's about to go out in the garden and pray to his God Father to take this cup away from him if possible. I don't see nearly enough wine on that table to explain his cheerful mood as he explains his coming demise to his apostles. Do you?

We will be celebrating Easter this year by hunting for eggs (which is what we do daily but that's another subject) and eating ham and greens and bread and possibly strawberry shortcake. I asked Owen if he wanted to hunt eggs at his house this year or at ours and he said ours, and at Gibson's party, Mark said, "Mama, what are we doing for Easter this year?" so I guess that's that. Nothing makes me happier than cooking ham and greens for the people I love.
I sure don't want to get involved with 20 million people. Oh hell no.

I was thinking that the next time any religious folks come to the door I should greet them naked which, if they were tender Mormon youths might just put them off women forever.
"Can I help you?" I'd say, in all of my sixty-year old womanly body splendor.
I wonder what in hell they'd say? Probably something like, "Maybe this isn't a good time. We could come back later."
"I'll still be naked!" I would yell after their retreating backs as they rushed to go wash their eyeballs out with bleach.

Oh, what would I do without a fantasy life?

Okay. That's all I feel like writing about. I will mention that the green curry Bento box with tofu at the Japanica! was awesome today. No broccoli was involved, just onions and that vegetable that tastes like paste but ten million kindergarteners can't be wrong. Right?