A Sunday With No Suckitude 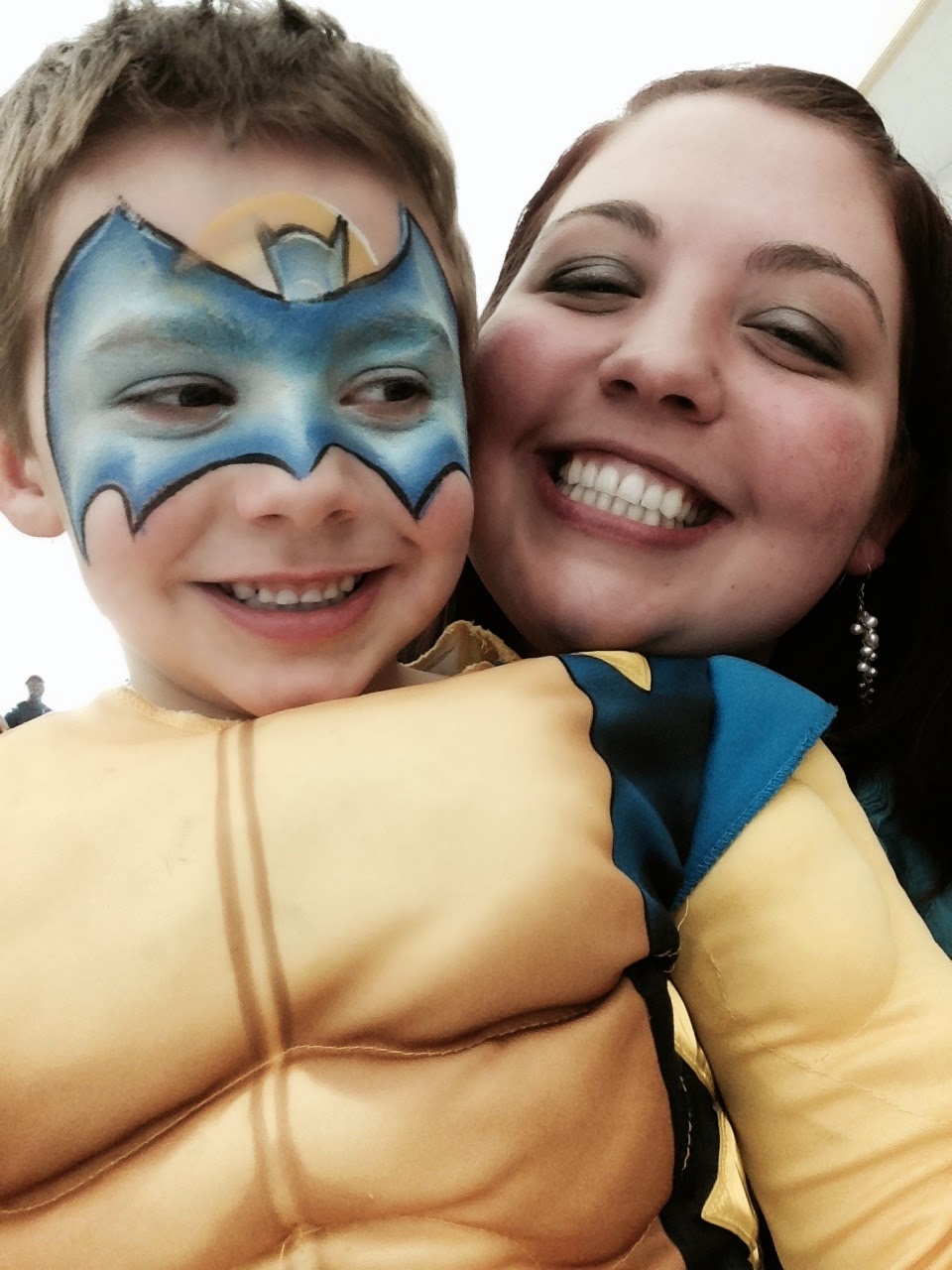 I think the boy had a great time at the party. Lily sent me another picture which featured Owen and the birthday boy but since I don't have permission from his parents to post it, I won't, but trust me, Super Man and a Power Ranger have never had huger smiles when posing together.
And oh, it was SO rough and SO hard to take care of Gibson.
Hahahahahahahahahahahahahahaha!
He was sweet as could be and didn't puke once. Here's what he did do, though. 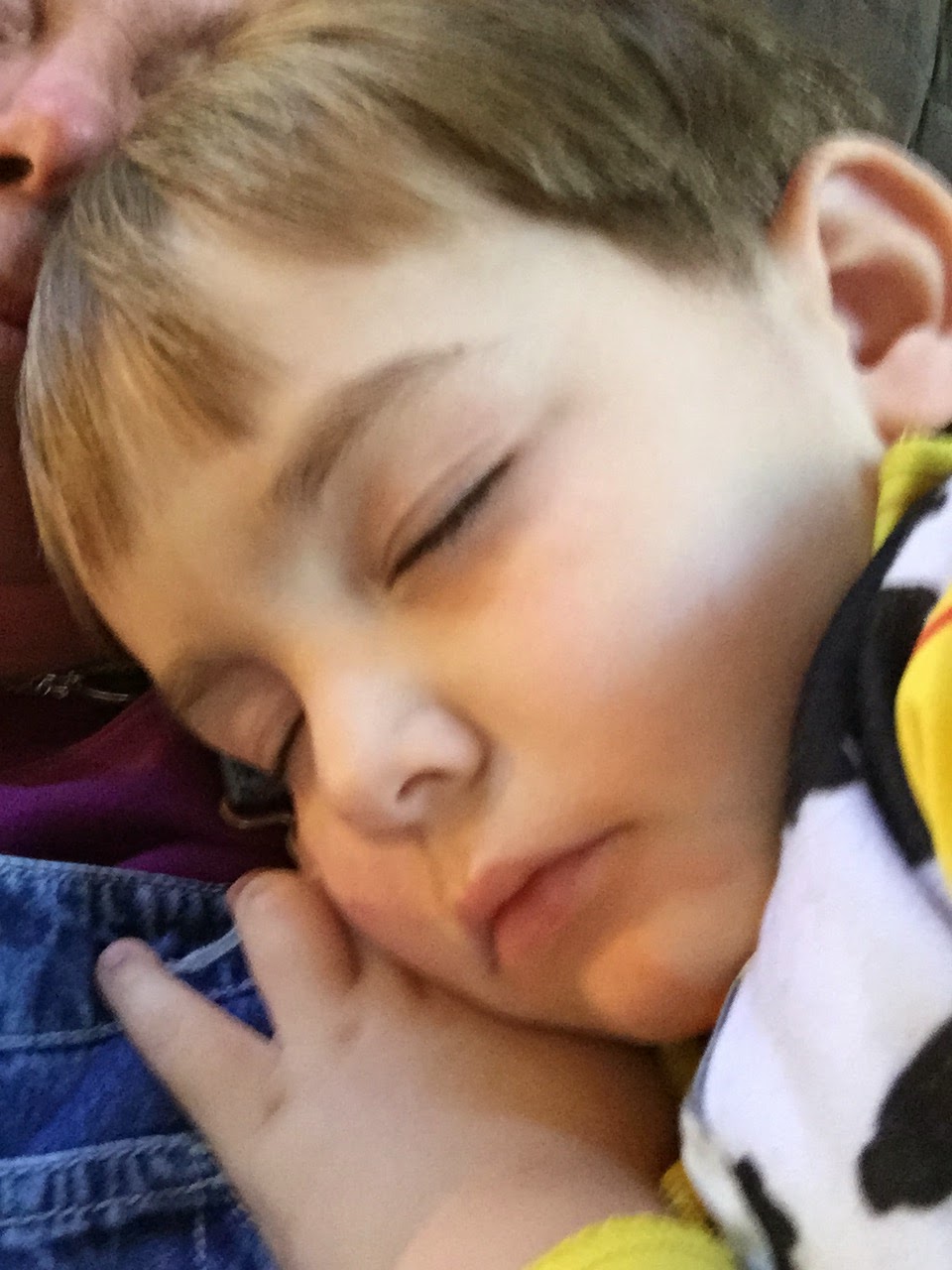 Fell asleep on his old Mer's old bosom. I would have fallen asleep too but his daddy came home and I gingerly scooted out from under him and gently settled him on the couch. Gibson will be three in less than two weeks and yes, he is growing up so fast but look at those fingers with their dimples, those cheeks, that sweet round chin. He's still our baby. And will be until Jessie has her baby at which point he will seem SO grown up. I cherish this time, though.

Speaking of Jessie, she texted me today to ask if I had "buckets" of chicken and dumpling leftovers. I told her that I'd make her her own batch this week. She likes the puffy dumplings anyway, and I'll love making them for her. She's at the point in pregnancy where she's not throwing up or anything but certain foods definitely appeal to her more than others.
I had one pregnancy where I couldn't get enough Greek salad. One where all I wanted was taco salad. Those little beans in our bellies make us want strange things.
I remember once when I was pregnant with May and her daddy was playing a gig in town one Saturday night. I asked him to please, please, stop at the Denny's on his way home and get me a toasted ham and cheese sandwich and he did and it was about the best thing I ever ate. That melted American cheese and the processed ham and the buttery bun...
Anyway, there's nothing that could make me happier than making up a big pot of chicken stew with dumplings for my pregnant daughter and her husband. I'm all a-tingle, just thinking about it.

Mr. Moon and I just did a martini-walk around the property and stopped in the garden where I thumbnail-snipped enough collards and mustards and kale to stuff in my overall pockets and I've already got them on the stove with onions and tomatoes, vinegar, salt and pepper. A bit of olive oil. Fifteen minutes from dirt to pot. I took the bouquet of mustards when I picked them and offered them stem-up to Mr. Moon to smell. It's a swoony smell. One I hope I remember on my deathbed. Spicy and green and I wish everyone in the world could have that smell in their nose at least once. Also the tea-olive which is about done blooming for now. The honeysuckle is starting to flower already and there you have that particular heaven-scent.

I think I'll make a cornbread tonight in one of my skillets. Have cornbread and cane syrup for dessert.

Today has not sucked. Not sucked at all.