Boys And Chickens And Other Things 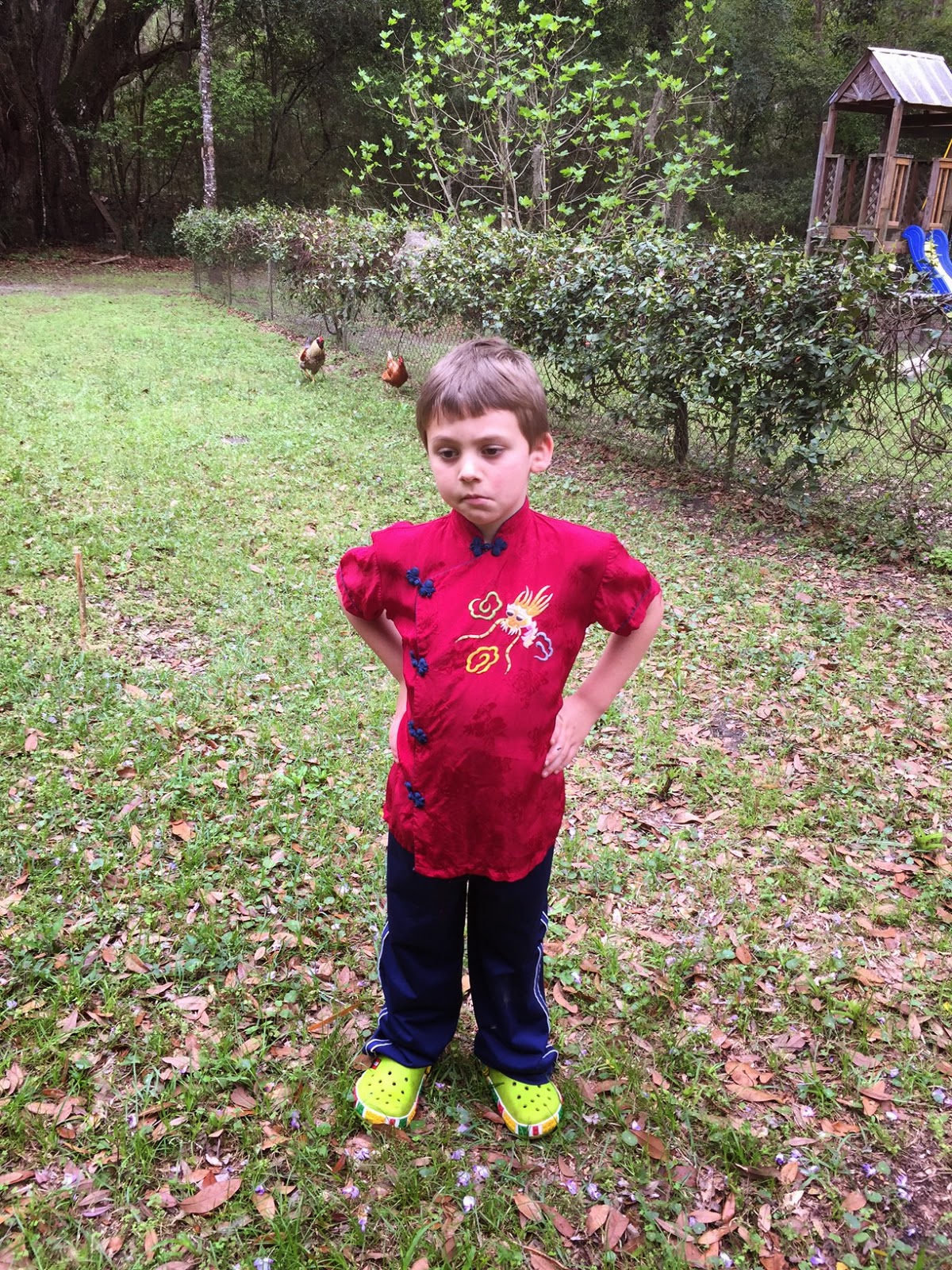 About ten years ago, probably, I bought that pretty little Chinese silk shirt at a Goodwill. No one I knew could wear it but it was just such a nice garment and had a tag written in characters, not words, and so I bought it and it's been hanging on one wall of mine or another for all those years until I looked at recently and thought, "Hmmmm. I bet Owen could wear that."
And I offered it to him to wear and it fits him beautifully and now it is his.
He loves it and wore it to kick bamboo and walk up to Papa Jay's and to pick sour flowers in the yard with his brother and eat them, to feed chickens and to collect eggs as well.
We had a short visit today, but it was a good one.
Gibson is talking so well these days. His vocabulary is probably increasing by a hundred words a week and he uses such expressive hand gestures when he talks that I am sure his Italian heritage on his other grandmother's side is coming through. He makes me laugh and he likes to cuddle and when he doesn't want to do something he still says, "I can't," and that is, as far as he concerned, the end of that.
So it's been a sweet and peaceful day. I took a picture of the grand oak next door, decorated for spring. 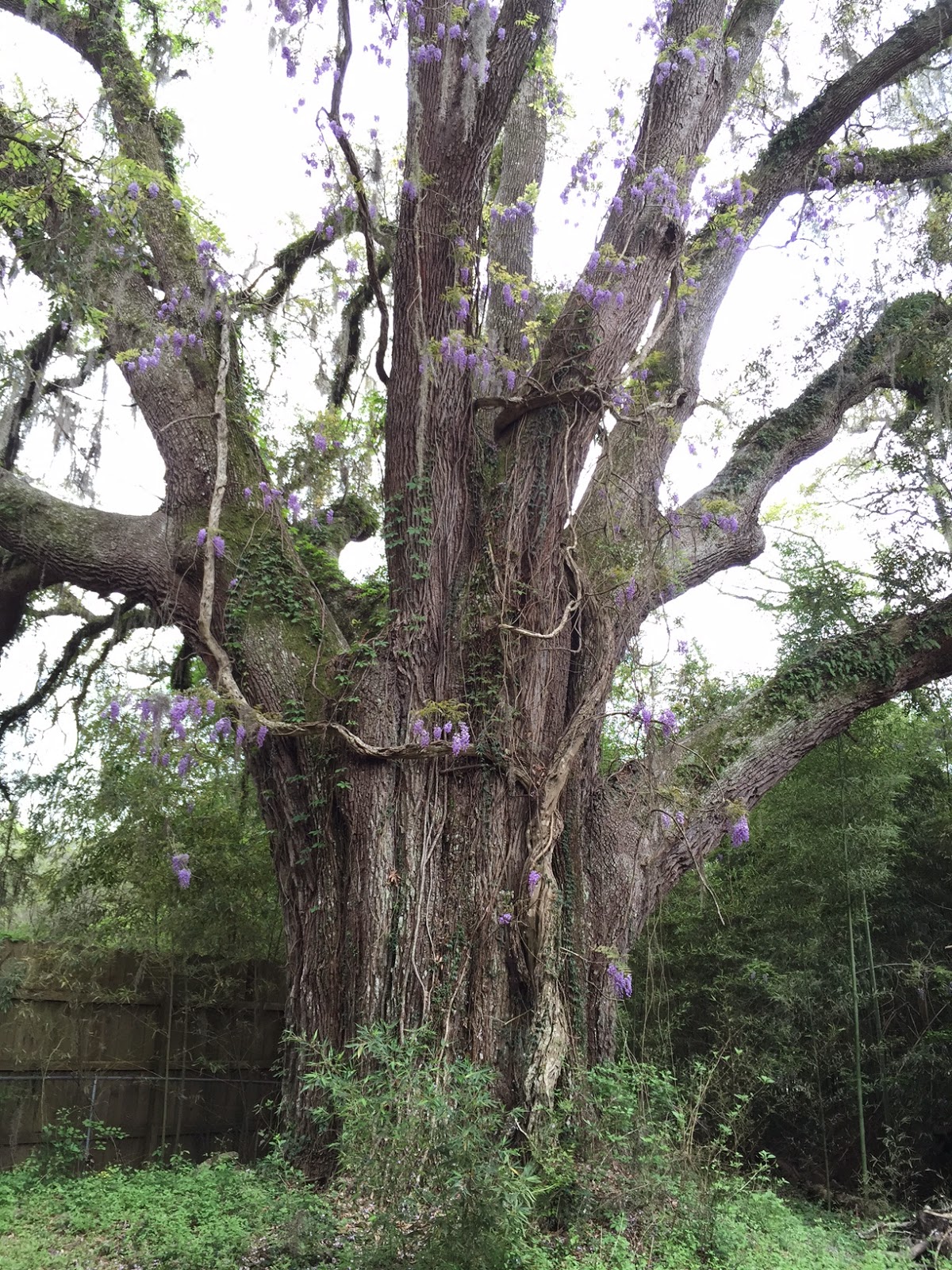 If you look closely, you can see that it is draped in wisteria and what you cannot see is the fact that the vine goes all the way to the top of the magnificent tree.

I have a dish of purple sweet potatoes from Whole Foods and carrots and turnips from the garden and onions and apples roasting in the oven. I don't know how good it will be but it sure is pretty. 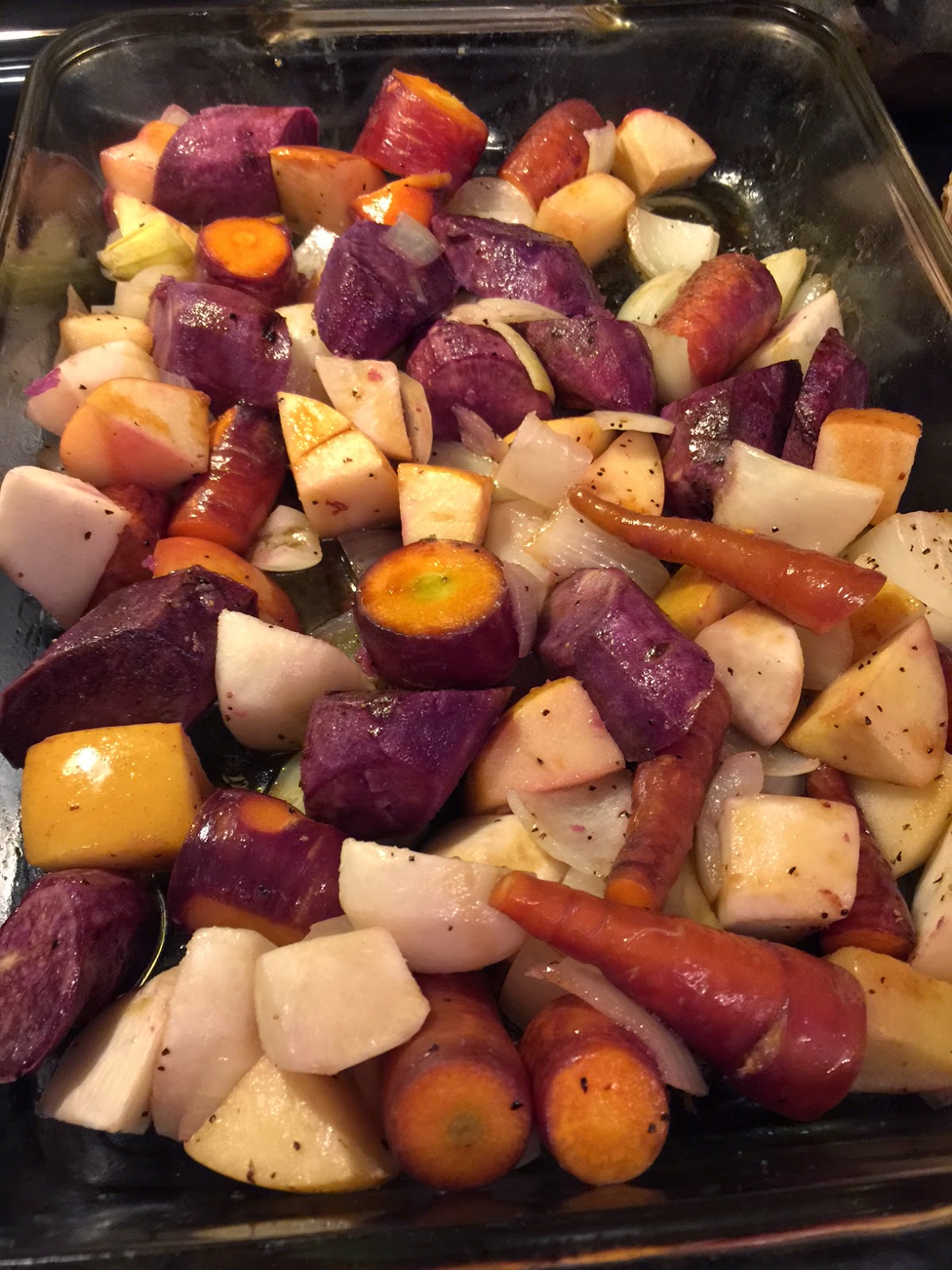 I should be serving it with steamed greens and quinoa or something but instead I am mismatching it in an unholy alliance with a roasted chicken. There will also be asparagus.
The sun is going down and Mr. Moon is just pulling into the yard. Mick, the sex fiend, is trying to slip into the hen house without Elvis noticing. The boys and I were sitting on the side porch this afternoon and Mick had Miss Nicey twice in about ten seconds right in front of us. Owen, of course, has seen this behavior before and I have explained it by saying that the roosters are fertilizing the hens. This is as far as I care to go with sex education with a five-year old and he seems to accept it.
"Look," he said today. "Mick is fertilizing Nicey."

I have been thinking recently about how, when I was being raised, everything was explained with psychological reasoning and that most problems were believed to be caused by mothers, of course, whether the problems were schizophrenia or low self-esteem, and potty training and attitudes about sex were at the root of most everything. And so I worry a great deal that I am going to do something to damage these boys for the rest of their life without even realizing it but I'm pretty sure that telling them what is basically a truth- that the rooster is fertilizing the hens- is not going to require years of therapy as they grow older.
I hope not.

And so it has gone. Another day in the life. I have done as best I could and I feel certain that you have too.