An Official Slogan Is Born 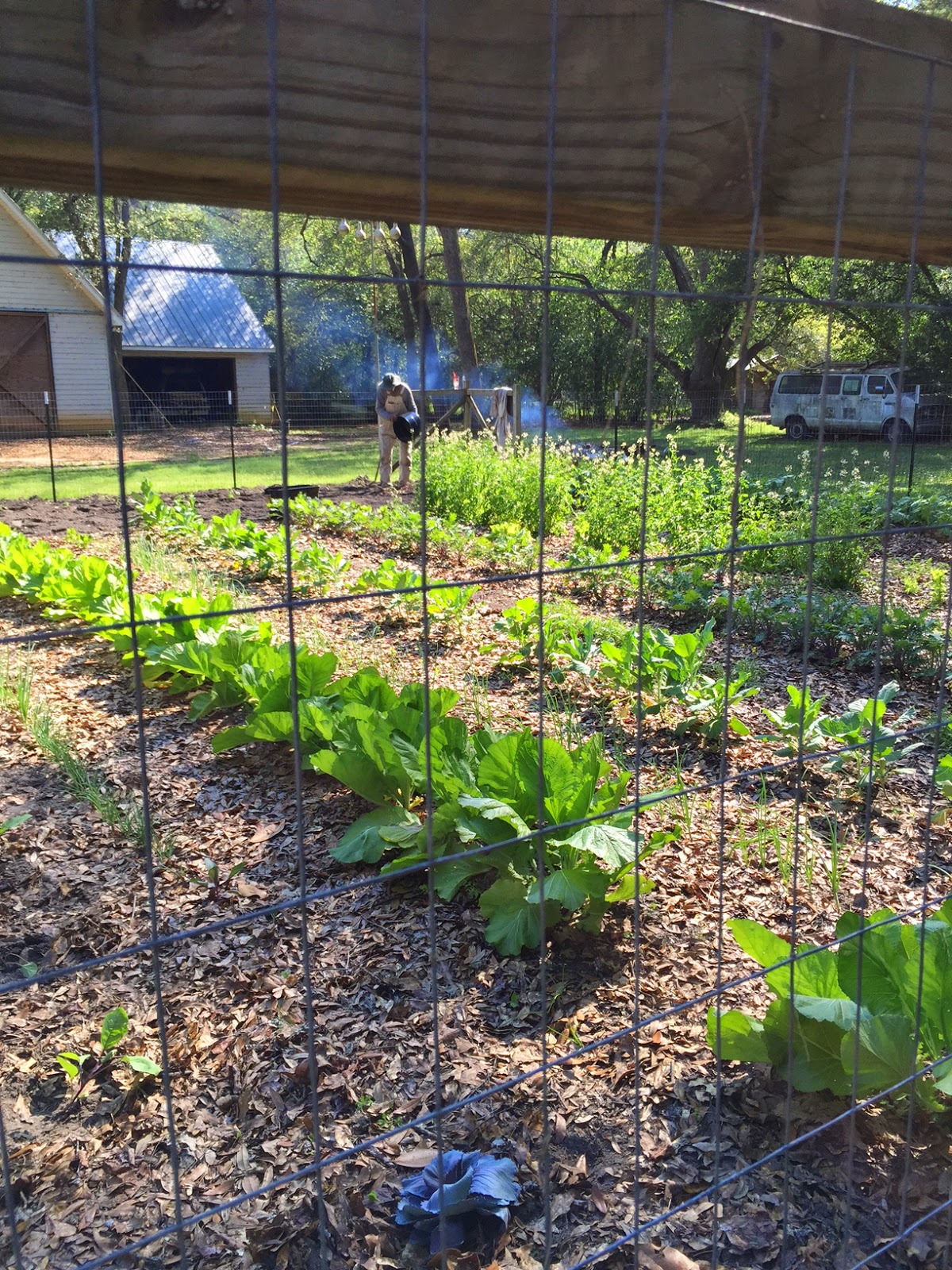 It has been a day spent mostly outside and mostly in the garden. There you see my sweetie, working away at what is to be our tomato patch this year. I did some weeding and also picked all the good arugula leaves from a row and then pulled the plants, gone to bolt. I did the same with some collards. My refrigerator now holds a large bag of collard greens, one of the arugula, and another of the spinach our friend Tom brought over.
I am rich.
I also planted two types of cucumbers and two types of beans. English and Straight Eight, Blue Lake and yard longs, respectively. I hope they make this year.

I also planted about half a row of cilantro which did well last year, surprisingly to me, and some peppers and some eggplants. We never get much in the way of peppers or eggplants but I do not give up. They are in a completely different place this year in the garden and so I have renewed hope, once again.

I am not going to pull that beautiful row of mustards until they bolt. I have left a row of collards too, although they have bolted. I will probably pull them after our Easter dinner. The kale is still beautiful and I will leave it where it is for now. There is another row of arugula that I will be taking out soon too. I hate taking plants out, just as I hate thinning. One must be cruel to kind in gardening, though. This is just the truth.
As I pull more things in the garden, I will plant some squash, some crowder peas, some zinnias. Perhaps some more cucumbers.

I transplanted some ginger lilies that I had dug up at the apartment complex where May used to live and where Lily and Jason lived once too and where our friend Anna still lives. I only took a few of the bulbs, not many, and I doubt anyone cared. Where I had planted them here, they got zero sun and so I moved them to where they have at least as much light as this yard offers. I planted a little pot of oregano but I have a feeling that the chickens will pull it. Ah lah. I will forgive them if they do.

When Jessie and I were at the nurseries yesterday we both went a little apeshit over the tiny air plants. I bought one for a ridiculous price because it looked like an octopus and I knew where I wanted to put it. 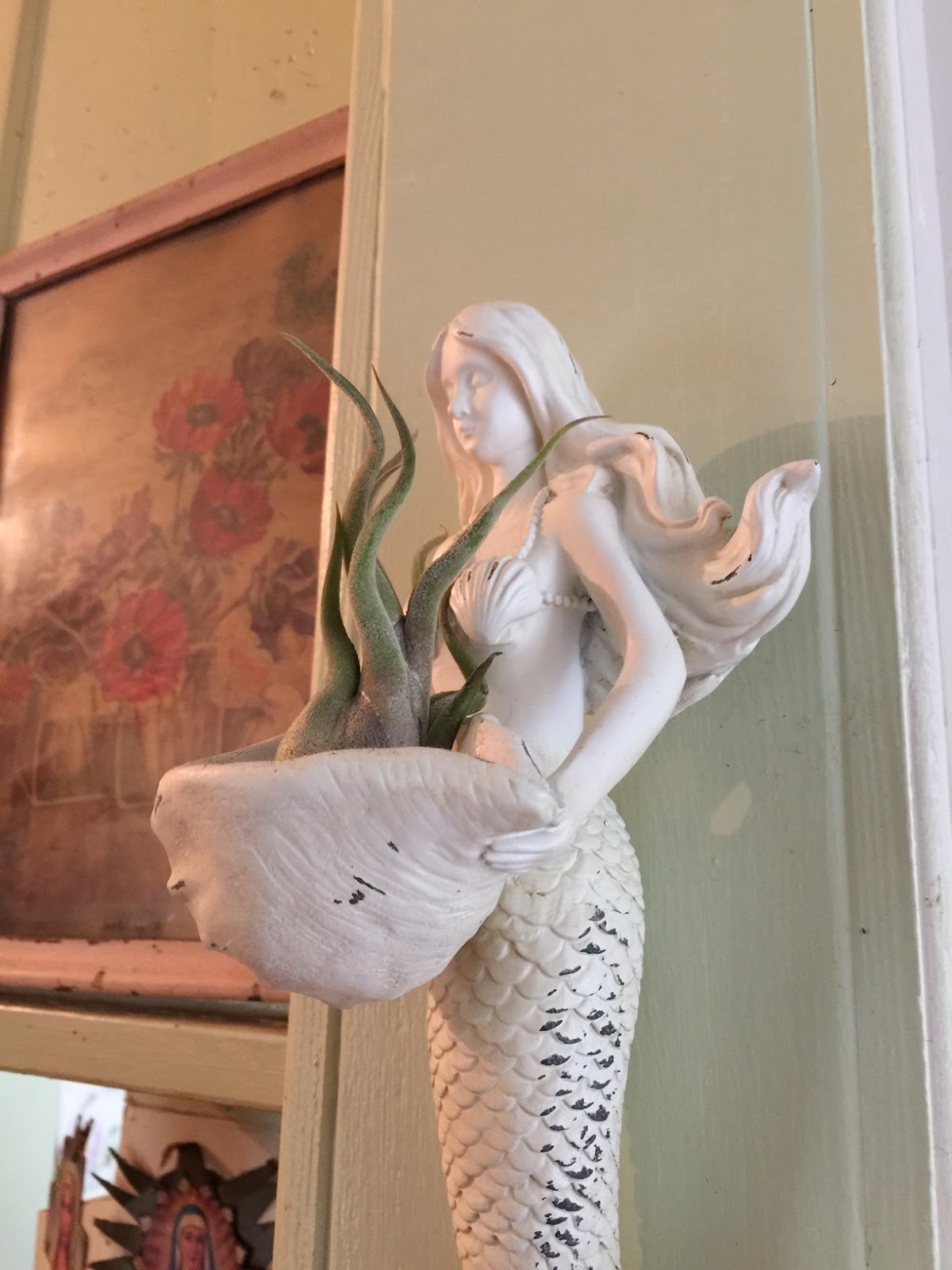 Is that perfect or what? The small piece of resurrection fern I tried to keep alive in that mermaid's shell never did a damn thing but hopefully, the air plant will survive. The mermaid, which Jessie gave me for Christmas, hangs right between the kitchen and the laundry room and bathroom so I see it about a thousand times a day. Money well spent, if you ask me.

Another thing we saw was a display of branches hung from walls with the moss hanging from them, the lichen clinging tightly. "My god!" I said. "I spend half my life picking up branches that look just like that!"
And I do and today Mr. Moon burned all the ones I've been collecting all winter, fallen from their trees in mother nature's pruning efforts. There is an endless supply should I decide to display them. They were quite pretty in their way.

And so it has been a good day. I've watered the porch plants, I've put the Rex Begonia that I also splurged on yesterday in a pot in the back yard. I used to be such a begonia freak. There are so many more varieties than you can imagine. I think that begonias for me were a sort of a grandchildren substitute and I let so many of mine go since I got real grandchildren although I still have some, most notably the giant begonia which I rooted from a leaf that a woman working at a nursery gave me years ago. I have two huge pots of those still and two small pots of leaves that I rooted over the winter.

Here's another thing Jessie and I discovered at the nursery yesterday- there is a variety of Caladium named "Frog In A Blender."
No. I am not kidding you. Here's a picture of what they look like. 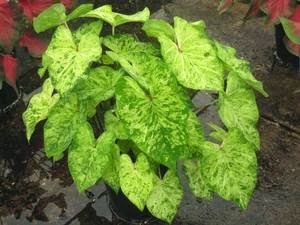 There is SO much I do not know which reminds me of something I heard a guy say the other day. He was talking to Papa Jay, getting into his truck.
"I don't know shit," he said, pulling his legs into his vehicle, "but I know people who do."
I have decided that this would be the perfect slogan for this blog as well as for the Church of the Batshit Crazy.

I don't know shit but I know people who do.

Yes. Perfect. And many of you are the ones I look to when I know I don't know shit because so many of you DO. For the rest, there is google and all of the books ever written. And of course my own children. Jessie, for instance, just pointed out to me why I have such a hard time parking and by golly! she was right. I am parking much better than I used to.

Soon it will be growing growing dark and Mr. Moon and I shall try to doctor Elvis. I've read more on the subject and I hear that vinegar is NOT the way to go and that we must hold him upside down at a sixty degree angle and massage the crop area up to the throat area to see if the contents of his crop will come forth.
And that it will smell very bad.

For Elvis, I will do this.
And I'll let you know how it goes.

I hope you have had a good day tending whatever garden it is you tend. There are many kinds of gardens and many of them do not involve dirt at all.
As you know.
But there is joy in tending them and all of them produce something.