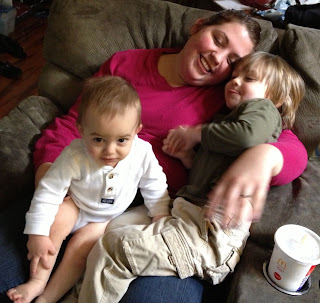 This is what it looked like when Lily and Owen got back from the dentist and she'd taken him to McDonald's afterwards for a treat and Gibson woke up from where he'd been sleeping in my lap which was perfect because I could study his face and kiss it and whisper, "I love you, my baby boy," and then there they were all together again and I'm sure Gibson was glad, even though he'd been an angel for me. He'd crawled through the house though saying, "Buh? Buh?" looking for his brother because I doubt he can remember an hour where his brother wasn't right there with him.

Today has been a sticky trap of something like grief but a muddy kind of grief, a grief that goes back a million years and even includes a father gone forever.

A cousin I haven't seen in maybe eighteen years called me today and he's in town and can he come out tonight and I'm having one of those days (sticky grief) where I can't hold one thought in my head for two seconds and yet of course I want this cousin to come out because I haven't seen him in eighteen years, maybe? and is this some sort of cosmic joke? My mother's brother's son calling from town-down-the-road? All of the sibling parents are dead now, the two brothers, the sister.

Well. I look at that picture and I think, "Okay. It's all okay."

And that part surely and purely is and I have May and Hank's voices in my ear saying, "I love you," and I know Jessie does too and they all know beyond a shadow of a doubt that I love them and Owen can stick his tongue out all he likes. He will be loved no matter what.
Which makes it all okay.