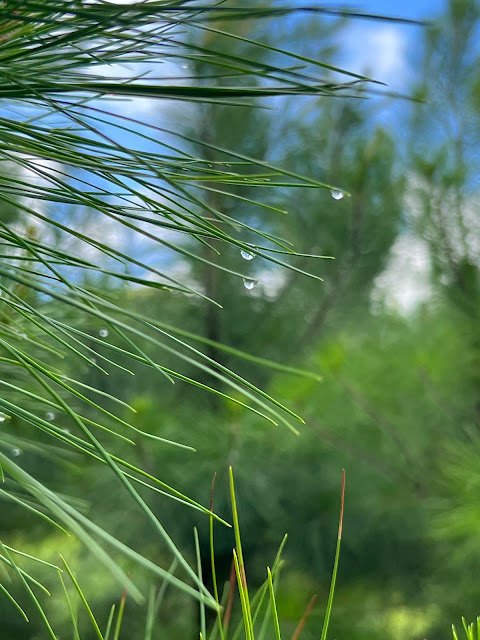 According to the garden cart rain gauge, we got a lot of rain last night.
I know it was pouring down when I went to bed. When I took my walk this morning, I stopped at a hidden spot a way off the road to pee and the baby pine trees around me were still wearing last night's water diamonds. It was an uneventful walk although I felt a small bit of rage as I always do when I pass my neighbor's yard where there is still a Trump sign proudly jammed into the dirt and now a new DeSantis sign is holding place of honor right beside it.
"Keeping Florida Free!" it says which is about as 1984 Orwellian as you can get. Probably many of you do not follow Florida politics so I'll just tell you that our governor, Ron DeSantis, who is running for office again this year, has done more to suppress freedom in our state than any governor in history as far as I know. He is also trying to suppress history itself as applies to teaching the honest truth about racial discrimination and the horrific treatment of enslaved people and their ancestors in our public schools.
I shit you not.
He's also the one who's pushing the "don't say gay" agenda which yeah, is going to lead to our LGBTQIA kids being free of feeling safe and accepted right here in the good ol' Sunshine State.
I will not even mention how he's trying to subvert, divert, and discourage our freedom to vote.

Anyway, there is the good news about the FBI raid on Mar-A-Lago yesterday. Mar-A-Lago is of course the resort and residence of our former president, DT, aka the Orange Intestine, and yes, Mar-A-Lago is indeed in FLORIDA.

When I read about that last night, I felt something loosen up inside of me, almost a fluttering of hope. I told my husband about it and he looked at me with an expression of surprised delight on his face. I mean- this is real shit here, y'all. There is much speculation about what it is that the FBI was looking for and most reports seem to think that they intended to retrieve classified documents that Trump had illegally taken from the White House when he moved out.
Now what those documents may have in them is something we don't know but what we do know is that in order to get a search warrant whether for my house or the OI's house, there has to be some damn compelling evidence that the agents will find what they're looking for. And that what they're looking for is something that needs to be investigated. There's a good short article from the New Yorker that you can read HERE with an explanation of how that happens and what it may mean in the opinion of Andrew Weismann, a former federal prosecutor and FBI general counsel.
Of course Republican Trump supporters are all up in arms and one of their main messages is that if this can happen to a former president you better believe it can happen to YOU!
Well, theoretically this is true but very few of us out here in the hinterlands are harboring classified documents of any sort, plus it's always been true, it's just never happened to a former president before.

The former president in question also had another blow struck against him today when a federal court ruled that his tax returns and audits can be released to Congressional Democrats who have been trying to get their hands on them for years. The Ways and Means Committee will get to have their way with these bad boys and soon unless Trump appeals which he no doubt will.

Still. Things are moving along, even at a snail's pace and perhaps eventually, justice will be served.

I bet you anything though, that the man will lose absolutely none of his supporters. They have proven themselves over the years to be absolutely welded to the idea that any problems he may experience are the result of the evil Left Wing Democrats who are out to crucify their lord and savior. I am sure that he's fundraising as we speak to accrue more money to help pay for his various defense efforts.

As all of this was going on the world today, I finally mopped my kitchen and watered my porch plants, picked and shelled some more field peas, did laundry, and watched and listened to another storm coming in. Life as usual.

And I took this picture of the golden orb weaver spider on the front porch. 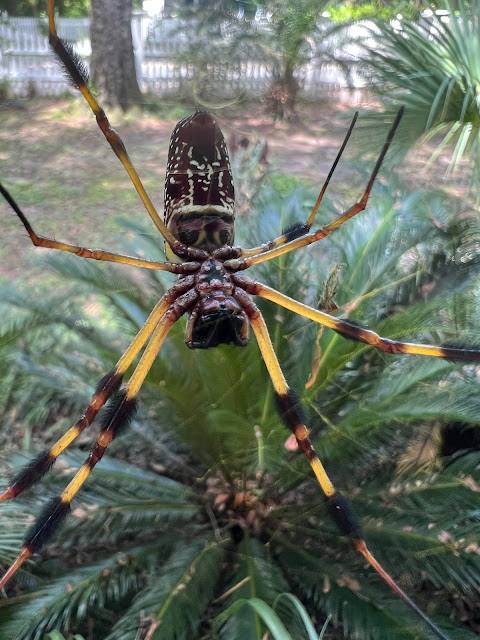 It's the same lady whose picture I took a month or so ago but she has grown in size to an amazing degree. As long as I do not jiggle her web, she gives me close access for photos. She'll probably be with us until fall's temperatures signal to her that it is time to lay her eggs, wrap them securely in silk and attach them to the porch ceiling, and then to say her final good-byes. A very neat and tidy life, I think. And one that is filled with the spinning and repairing of webs, patience, harvesting what becomes entangled in her strong web, and I suppose a bit of sex as her man spider continues to live near her, a small and doomed little creature, as eventually we all are. So let us spin and be patient and enjoy what we can while we can.
I am so grateful for the rain.
Love...Ms. Moon
Posted by Ms. Moon at 6:25 PM