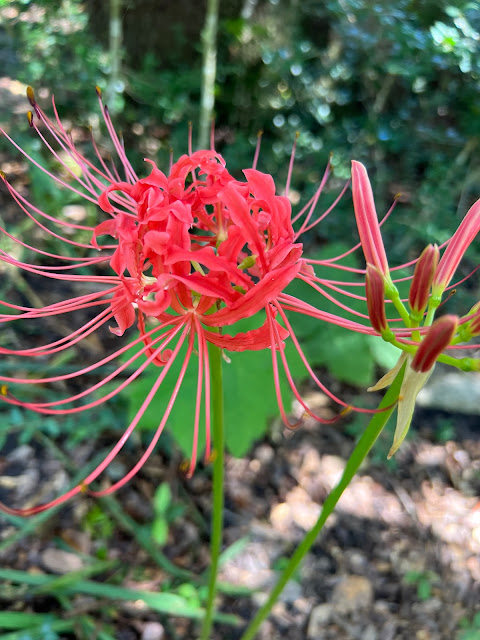 The hurricane lilies have done their magical, mysterious thing again and are blooming before I even noticed any of their stems popping up. I do not even want to discuss hurricanes right now for fear of jinxing us. It has been a very quiet year for them so far (knock wood, knock wood, knock wood) but the season is nowhere near ending and we have gotten some of our worst ones as late as November in previous years.
I think of the lilies as warnings to be wary. I can't imagine what it was like before there were meteorologists and communication systems and all sorts of ways of detecting storms forming in the Atlantic and Gulf and reporting them. There is a feeling right before a hurricane hits and there are signs for those who are experienced and knowledgeable but these are things detectable only a day or so before the winds and rain begin to pummel. How many people had almost no warning before massive hurricanes swept down upon them, causing so much death and destruction? Even now, with all of the technology we have, there is no real way to know exactly when and where a storm will hit because they are influenced by so many different ever-changing factors and a few miles this way or a few miles that way can make all of the difference in the world.

But there are the lilies, an eternal signal from nature that it is the season.

I've had a good day. I walked and I have decided that I have to figure out a route that is more shady. There is White House Road where I walked for a few years but there is so little space on the sides of that road for me to step away from traffic. There are clay bluffs on each side of much of it, making it impossible to get more than a few feet from the asphalt. There is not a whole lot of traffic on it and it has far more shade than the route I take now but I do not really feel safe on it. I think I might try parking somewhere on Lloyd Creek Road which is a fine and shady place (mostly) to walk. I don't know. I just know that the heat of the direct sun is almost more than I can bear.

After my walk I did a true trip to the Dollar General and I am going to admit right here and now that although there is, yes, a lot of damn junk in the store, there are also many items which are going to save a lot of people around here trips to Tallahassee or Monticello. They have a surprising amount of stock, from small electronics and tools to craft supplies to school supplies, to basic underwear and toiletry items. There are cat and dog foods and things that pets need. There was indeed some fresh produce and there are healthier yogurt options along with cottage cheese and even Asian frozen meals. There were home goods like pillows and rugs, a row of supplements and OTC drugs, and some cheapish toys. There are things like coffee and flour and a few simple spices, some Mexican foods, canned soups, condiments, and things like that. The aisles were still filled with unstocked merchandise and there were not nearly enough employees to shelve the items and wait on customers.
Of course nothing there is of great quality although I did get a box of my usual brand of pasta for a dollar which is less than half the price it generally costs at Publix. I also bought a memo pad for a dollar and two quarts of half-and-half to go ahead and try to make ice cream. Which I have done, adding three egg yolks to the mix. Lily tells me that there is a whipping cream and heavy cream shortage right now and Publix is temporarily out of it so...
And thus, I have indeed danced with the devil but it may turn out to be a helpful devil. I would hate to think of myself as someone who is so close-minded and stubborn that I can't admit that perhaps this is a good thing for my community. It is not as ugly as I feared it would be and who knows? Perhaps the swamp will still function as a swamp and it is not truly the end of the world.
Fingers crossed.

I went and waited for Gibson and Maggie's school bus to arrive at the end of their road and drove them to their house. We let the dogs out, those two almost-twin cuties, Chloe and Pepper. The kids swore they didn't have homework and wanted to watch a movie and so that was what we did. Pretty soon Lily got off work and had picked up Owen from his bus which arrives later than the younger kids' and I came on home but not before getting these pictures. 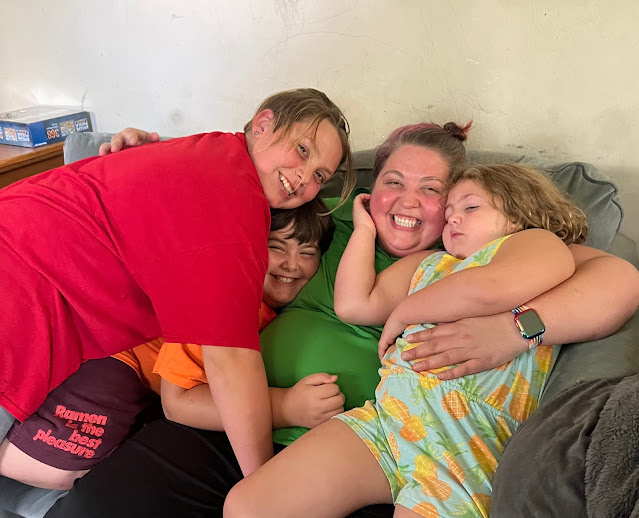 Maggie was not so happy because there was an issue with wanting to play a game with me that we did not have time for. She wants what she wants, that one.

And here is Gibson in his new safety patrol belt and badge. If things are like they were in my day, being a safety patrol is a pretty big honor. 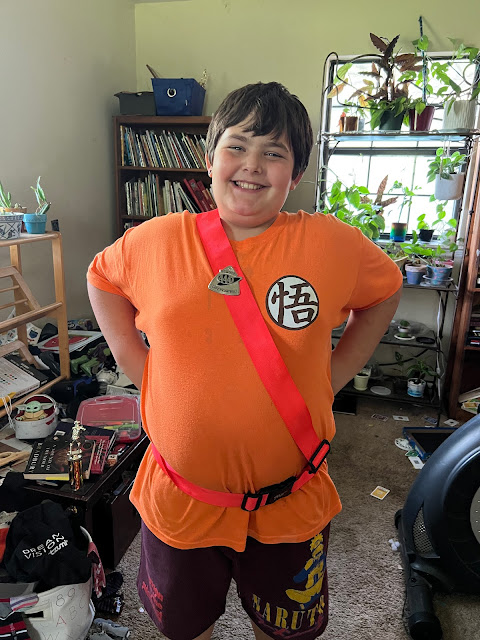 I believe he may be proud and I am proud of him.
I did not take Maggie her new doll because I am working on another dress but of course I screwed that up too. Ah well. I'll figure it out eventually. The seam ripper is my friend.
I must tell you that Dorothy Anne looks happier and more content every day. I still do not quite understand the urge I had to buy her but I am glad I did. Every morning I take her from her make-shift bed under my vanity and wish her good morning, kiss her, hold her to my shoulder for a quick pat or two, and then put her on our fresh-made bed and every night I wish her sweet dreams, kiss her again, and tuck her back into her pillow bed. 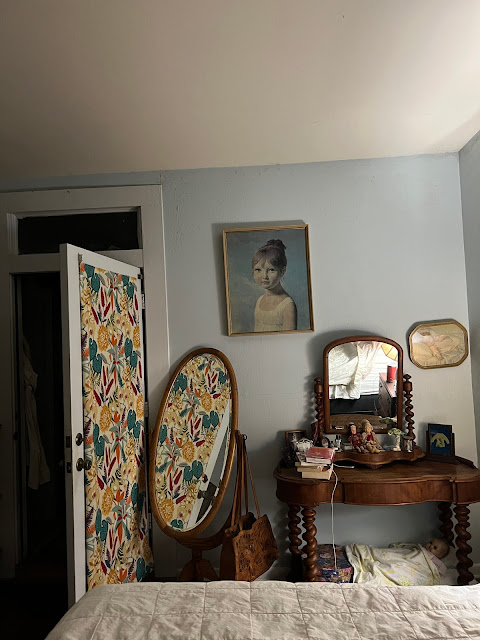 Can you see her down there? I took this picture a few nights ago because I loved the way the curtain on the door into my bathroom was reflected in the mirror. Which I do not look in. At all. Ever.
Mr. Moon has many trips away planned for October and November and I have a strong feeling that Dorothy Anne will probably be occupying his side of the bed while he's gone along with Jack. I always loved co-sleeping with my babies.
Love...Ms. Moon
Posted by Ms. Moon at 6:31 PM