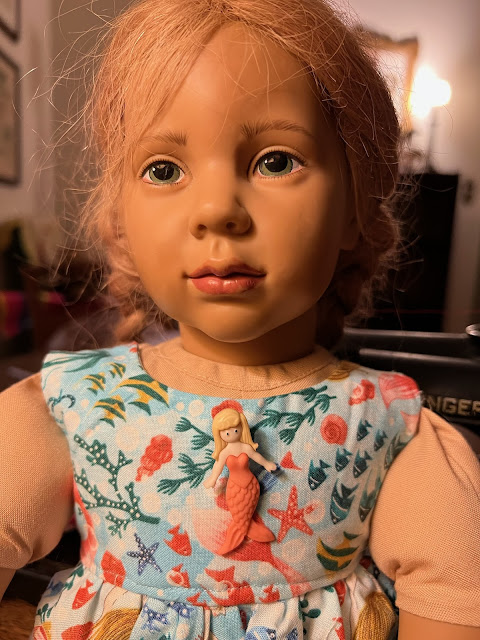 Here's Lisi in her finished dress. I sewed the velcro on to secure the back and thank you to whoever recommended that to me. I apologize for not remembering. It was so easy. I would have had to fuss for hours with buttonholes. And as you can see, I sewed one of the mermaid buttons on as an ornament. It looks like it was made for the dress, doesn't it?
I think I need to give Lisi's hair some attention. Poor thing.

I woke up feeling like my little cold was still having its way with me. Nothing terrible, just feeling slow and stuffy. I slept pretty late although Mr. Moon got up at five a.m. His fishing buddy down at the coast needed some carpentry help and so Glen went to help him. He's a good guy.

Since the man would be gone today I decided to take it easy. I mean, I can take it easy if he's here but I feel less guilty if no one is observing my slothfulness. Never once has he ever criticized me for having an unproductive day but I was born with built-in shame and guilt and then those two feelings were nurtured carefully in my childhood. I have plenty to spare should you ever need any, by the way.

The only thing I did that was in the least physical was to repot my jade plant that the chickens had knocked over on the front porch. The pot broke as did the pot holding a begonia so I cleaned all of that up. I had to play pot musical chairs to get my jade re-homed and didn't have another for the begonia which was really leggy anyway. I broke off a bunch of stems and put them in water to root if they can muster the determination and strength to do so. Remember the little begonia I bought for my birthday? Well, even though I put it up where I thought the chickens wouldn't get it, they've nipped it pretty close to the bone. I suppose it's a tasty delight to them. Since they are in the coop for now, the poor plant will have a chance to make some more leaves. They just do love begonias. Some plants they don't bother with at all but begonias are definitely a favored salad green.

After I got all of that dealt with and the porch swept, I mostly just puttered around. I finished the doll dress and began work on another one. Now let me tell you something- I have no ability to see things spatially. I'm not sure that's exactly what I'm trying to say. It's very hard for me to figure out how things work. I've always been this way but it's getting worse. For example- when I am replacing the hardware on a pair of overalls, I have to really, really study the situation to get the new buckle on correctly so that the strap can be lengthened or shortened. I don't care how many times I do that job, it's like brand new, every time. You'd think I was trying to figure out how to repair a jet engine instead of a dang overall strap. So, sewing without a pattern is rather difficult for me. I found some red-checked material that I'd made Maggie a few dresses with when she was a toddler and figured it was enough to make Lisi a dress. I had an idea in mind involving a lining for the dress and made a simple pattern- so far, so good, right? And then I sewed the lining to the outside fabric in completely the wrong way and I can either rip it all out or just throw it away and try again with some more material because I do not have enough of the checked material to make another dress. And I thought I had this all figured out. I have been sewing since I was in about the seventh grade!
Well, hell.

Thank goodness I don't have that problem when it comes to cooking. I was born to cook, no doubt, and although I am certainly not the best cook in the world, I pretty much know what I'm doing in the kitchen. Recipe or no recipe, I can figure most things out intuitively. As I've so often said, just watching the woman we called Granny Mathews in her kitchen informed me of how I wanted to cook which was from real ingredients, mostly weighed and measured by hand and eye. I am grateful to her to this day.

Tonight's supper is a very, very easy one. A cheat, as I call it. I've got a spaghetti sauce simmering on the slow burner with onions and peppers and garlic and a little bit of ground venison and a jar of Rao's herb tomato sauce. That's the cheat. I am not too proud to use a jarred tomato sauce. I am not Italian and thus do not have a guardian ghost grandmother threatening me with her wooden spoon as I open and pour the sauce into the pan.
I will, however, grate my own parmesan and of course I have a loaf of bread rising.

The man has just pulled into the yard. It is drizzling a little bit which sounds and smells delightful. We still have five chickens. I am sure we still have a fox or foxes. I have been lazy today and that is okay.

Vergil sent me the number to call to reach the Florida Department of Transportation permitting office for over-dimensioned and overweight vehicles. I will try to call them on Monday. I say "try" because making phone calls like that is anxiety-producing for me but dammit, I want to know what in hell that was in the video. Mr. Moon has theorized that it is going to be part of some underground system for one of those huge convenience store things that sell everything from jerky made with every type of meat animal (gator jerky, anyone?) in the world to fresh baked goods. They are clearing huge swaths of land near here by the interstate exit and entrance and that could possibly be the answer.
Who knows?
Not me.