It's Spend The Night Time In Lloyd 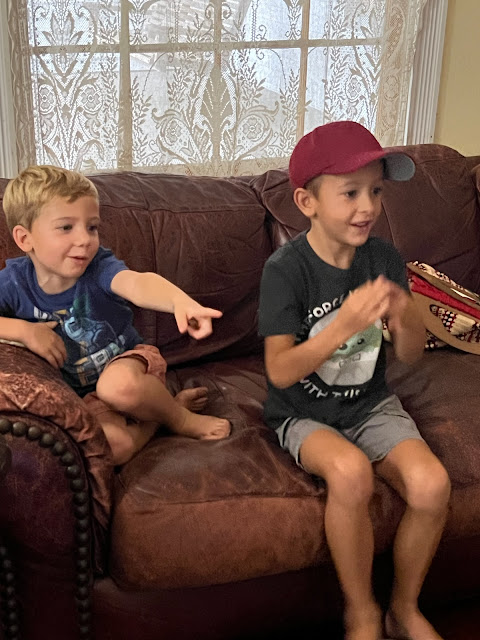 Well, the boys are back in town. I'm so glad to have them here. The first thing August did was run to dump all the Lincoln Logs on the rug in the Glen Den and build a house with them. Levon wanted to read some books so after his mama and I did a little chatting he and I settled on the little love couch (as Owen used to call it) in the library and nestled among pillows and giant teddybears we read two old favorites in a row- A Fish Out of Water and Mike Mulligan and His Steam Shovel.

Now Boppy's back in the house too, after helping Vergil and Jessie move their summer home, the RV, into a slot here at the Moon Car And Other Assorted Vehicles Storage And Repair Facility. Vergil's going to redo their driveway and needed to get the RV out of the way for awhile. And of course Boppy means TV to the kids so there they are, deciding what to watch with some goldfish crackers and cherries as a pre-dinner snack.
They were all a bit peckish.

I've got the broth with vegetables simmering for the chicken and dumplings and the chicken is cooling so I can take it off the bone and add it to the broth with the dumplings I'll make in a minute. I sent Jessie and Vergil home with the leftover soup from last night and a chunk of dense and artisanal sourdough. The bread tasted fine and the soup was as good as it always is which is to say- the Best Black Bean Soup. We've got all of the ingredients for Purple Cows which would be sherbet, grape juice, and ginger ale. It's so dear how all of the grandchildren have come to expect their own versions of the same things when they come over to visit. Their favorite meals, their Purple Cows, the glasses they prefer to drink out of, the choice of a bath or a shower and which shower they like to use, the books they want to hear, the toys they want to play with, the snacks they expect to find, the games they want me to play with them, the shows they want to watch with their grandfather. It is literally home away from home here and I am so glad that we have such a fun grandparent house, full of hallways and paths through rooms, a room with books galore, a room with toys and the TV, tricycles, a bouncy horse, porches to sit on, swing on, or leave your flip-flops on when you come in the house. They all know where everything is, in some cases probably better than we do. They know which cat they can pet and which one to avoid at all costs. They know what to expect and are always happy to visit.

Look at this pretty child.

Those eyes. He and his brother are good-looking fellas. I asked Levon about Hazel. He said she was "pretty good." "Do you think she'd make a good friend?" I asked him.
"Yeah," he said. 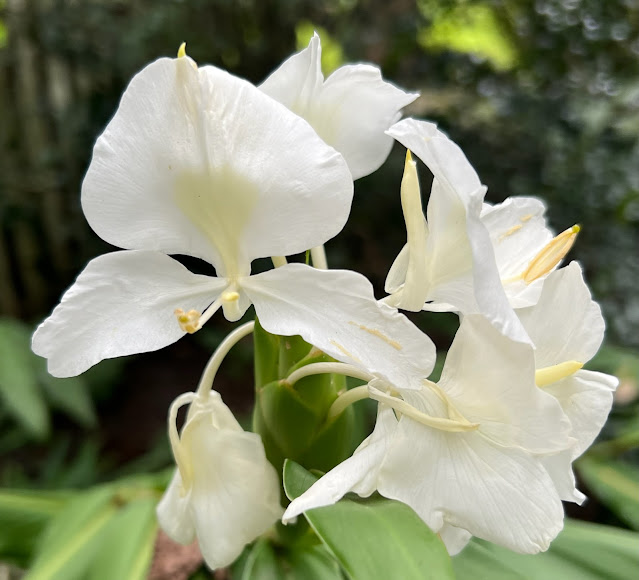 I wish you could smell it. It's a special sort of deliciousness.

I better go make up some dumplings. Big brains and long legs do not grow on snacks alone.
Love...Ms. Moon