More About Vultures Than You Ever Wanted To Know

There you go- a picture of vultures. Or, as we call them around here, turkey buzzards. I really missed the best shot which was of about ten of them in that space, all with wings spread like so many English brollys in a downpour.  I had crossed the road so as not to scare them but just as I was aiming my phone to get a shot, a car drove by and scared them off. As far as I know, I've never seen that particular wing-spreading behavior before. I just looked it up on this site to discover that they do it for several reasons including thermo-regulation, help with parasites, and also for drying their wings. This is called the "horaltic pose." How cool is that? I had no idea. I also learned that vultures shit on their legs and feet so that the acid in their poop will kill possibly dangerous bacteria they've picked up by walking around on dead and rotting things. It's really no mystery why we consider these so-very-important birds to be nasty.
I thought surely that the large group of them I saw this morning must have some very large dead animal they were feasting on but I did not see so much as a scrap of armadillo. Maybe they were just having a little committee of vultures, which is the proper term for a bunch of them just sitting around exchanging carcass-stripping techniques or perhaps family matters.

So yes, I did take a walk this morning. God, I did not want to. I kept trying to come up with excuses not to but Mr. Moon was already at the gym working out and it was slightly overcast and thus, not apt to be quite as deadly hot, and really, I had no excuse. Of course, just like yesterday when I decided to go work in the garden because it was overcast and then the sun came blasting out, this is what it looked like after I'd been pounding that sidewalk for a mile or so. 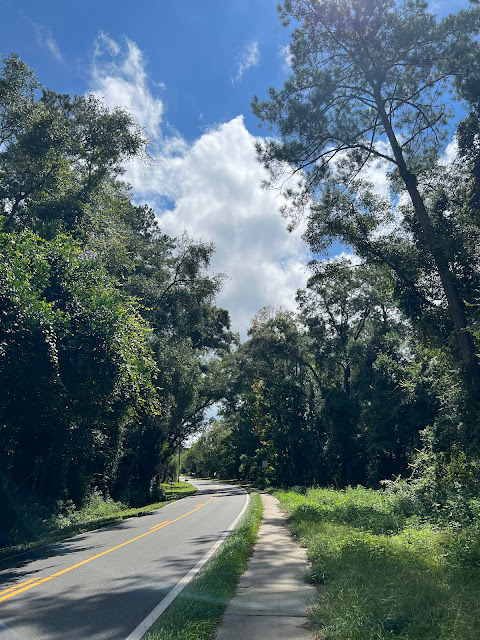 Still somewhat cloudy but WAY off on distant horizons. That is one of the shadiest portions of my route.
Damn.
We're still in the nineties here daily with very high humidity. Blessedly, we are getting some rain almost every day.
When I got home, Mr. Moon was back from his work-out and I asked him how it had gone and he told me and then he asked me how my walk had been and I said, "Look at me."
That was all I needed to say.

But because I suffered, I have felt virtuous all day long. I thought about digging up some more sweet potatoes but could not bear the thought of going back outside in the heat and so I did a little light housecleaning and some laundry and so on and so forth. I started a stock for a fish and corn chowder we'll be having tonight. I cooked us some delicious snapper last night and those leftovers will go into the soup. I roasted some peanuts which is a new favorite snack around here. And I've fiddled around with the sourdough bread dough I made up last night. I left it in the refrigerator overnight and took it out this morning and it's looking pretty fit to go into the oven. Soup and bread- what more do you need?
I mentioned to the man yesterday that we haven't made ice cream in forever and he's been thinking about it ever since. He actually stopped at the Dollar General on his way home from town today to get some moth balls (they have been suggested as a way to get foxes out of their burrows) and he reported that not only do they have some produce stocked now but they had people restocking shelves all over the store AND that they had large containers of half and half in case I wanted to, uh, make that ice cream. I had to tell him that I needed actual cream for ice cream. He was a bit crestfallen.
I have promised him that I will get cream soon, ice cream to follow.
And so that has been my day.
Here's a picture that Jessie sent of Levon waiting to get his covid booster. 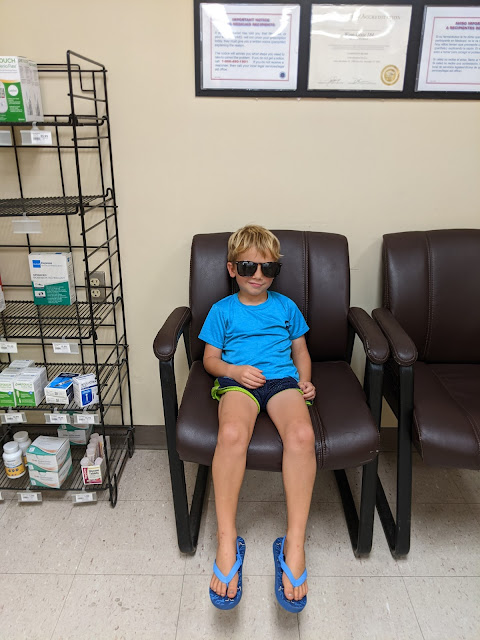 Cool kid with long legs. Tomorrow I'll see the Hartmann children as Lily has a gap she needs filled before she gets off work. I'll be picking up those kidlings at the bus stop.
Bread's in the oven! Time to make the chowder.
Love...Ms. Moon