There Are Spiders But Not Very Scary 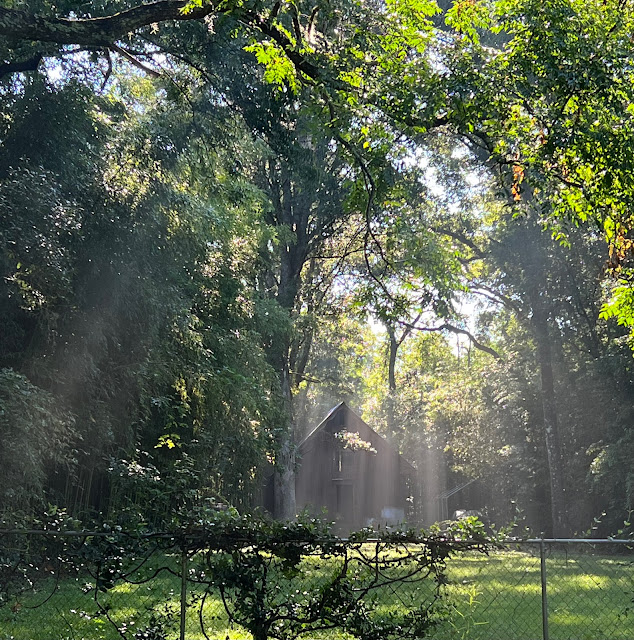 When I went outside this morning to let the chickens out, the sun was streaming through the leftover dampness from the rain we got last night. The beams coming down were like heavenly spotlights directed all over my side yard. It was so beautiful that I had to pause and take pictures. 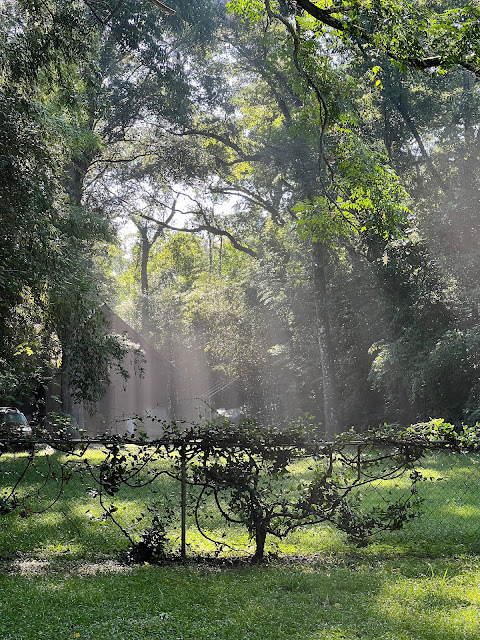 And then I saw that same light shining on a different golden orb weaver and her web with dew drops spangling all in it like the most delicate of fine jewelry. 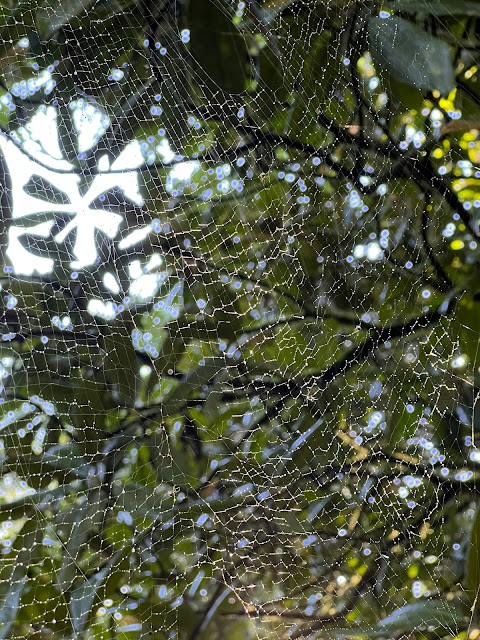 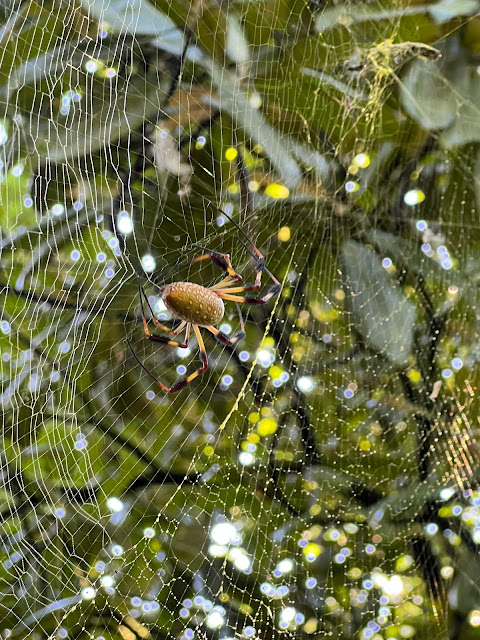 There she is, spinning her silk and repairing the places in her weaving that had been disturbed.
Okay. Here's one more. 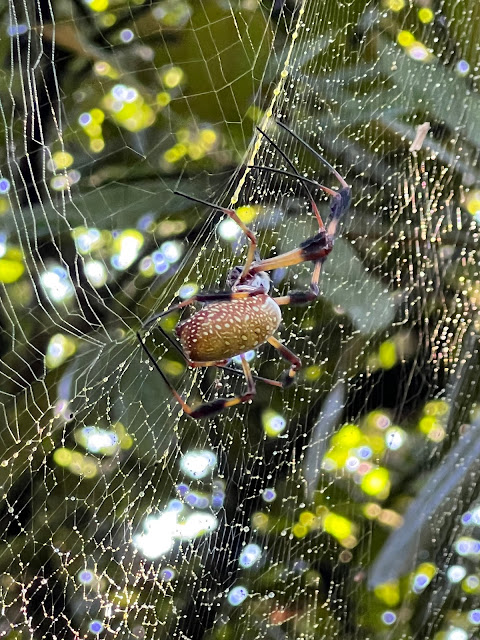 I have had a practically perfect day. For me. I got the sheets in the washer and took a shower and washed my hair which is as long as its ever been, I think, and got dressed and drove to town and met Jessie at a Cuban restaurant which is quite near Levon's school so that we could get lunch before she had to pick him up. A Cuban sandwich and a cup of black bean soup is pretty much my idea of a perfect meal.
Oh hell. I just love to eat. I have so many favorite meals. But that is definitely one of them.
We chatted about all of the important stuff and she was able to leave early enough to get the boy on time.
I went to the library which of course would be on my agenda for an almost perfect day. I quickly found three books I think will be interesting including a memoir by Harvey Fierstein. 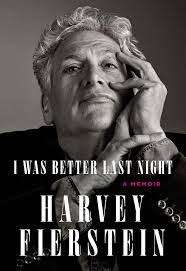 I have always adored him and I feel certain that his story will be a fascinating one.
And then off to Publix where I wanted to buy some blackberries. They were BOGO, the organic ones, and not only AS big as my thumb but BIGGER than my thumb. Also sweet as a mama's kiss. I have been wanting to make a pie and now I have. It also has a few nectarines in it. It is in the oven now. 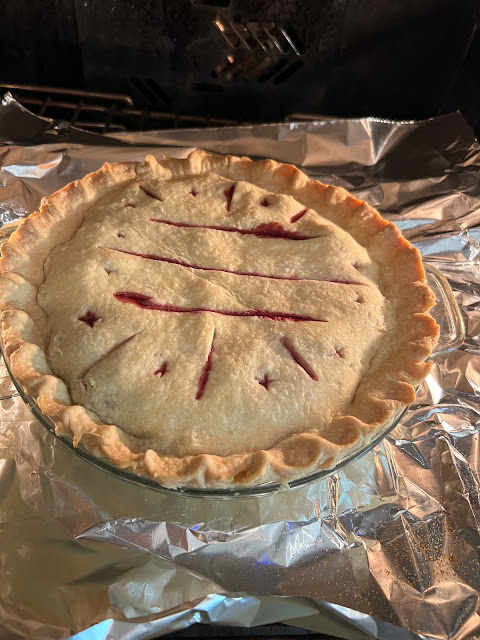 Oh, I hope it is good! There is something for me that is so comfortingly therapeutic about making a pie.
After Publix I stopped by the Bad Girls Get Saved By Jesus Thrift Store. It was mostly great except that to demonstrate one of their audio devices for sale, I guess, they had a CD playing of some uber-Christian choir with what sounded like a New Zealand preacher adding his praise and adoration into the songs.
Oh, Jesus.
But I tell you what- if I were a singer and in a choir like that, I can only imagine that the feeling of being filled by the holy spirit must be overwhelming.
Hell yes!
All glassware was 50% off and so I got a very nice large glass canister, what I'd probably call a cracker jar, with a lid for $3.50 cents. I am not sure what I'm going to put in it but I think my brain already knows and will tell me soon enough. I also got a nice Melissa and Doug floor puzzle called "Mermaids' Playground" for about two bucks so that was a very fun treasure hunt.
Thus, it could hardly have been a better day although sadly, my husband was not a part of it. He was way too busy working on that car engine transplant. And he sent me this picture from the garage: 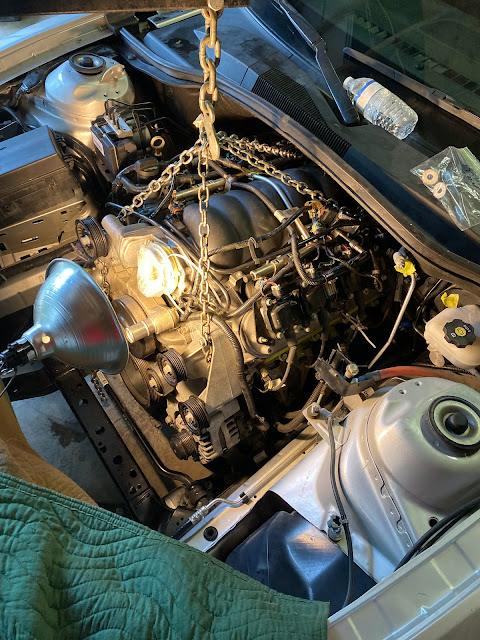 TaDa! The transplant has been completed and now all that's left is what he is calling "buttoning it up". You know, stitching blood vessels and nerves in place, I suppose. He is so, so happy. And so, so tired.
Martinis have been made. Clean sheets are on the bed. Tomorrow we are going to the beach with the family.
All is very, very well.
Happy Friday, y'all.
Love...Ms. Moon
Posted by Ms. Moon at 6:18 PM