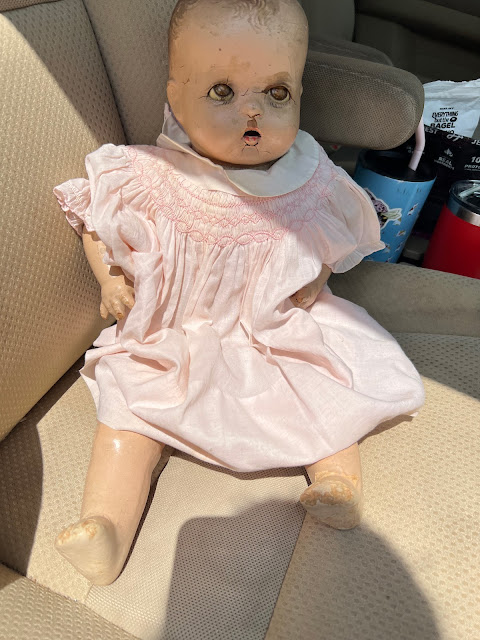 Dorothy Anne, freed from her dark shelf in the tiny room upstairs at the antique store.
Oh, it was such a good day. Last night I sent out a text to the family asking if anyone wanted to go to Monticello today to retrieve my doll-child, go to Wag the Dog, and eat lunch at the Mexican. And everyone did! May could not go because of work but the rest of us were there.
Jessie stopped to get me on the way and we ran by the library to see Terez and were surprised to find that it was a special day there, with free kid books, a lady who makes balloon animals (and swords) and another lady doing air tattoos. There were also hamburgers and hot dogs. I just love that library. We hung out while Kathryn made the boys a sword and a unicorn. 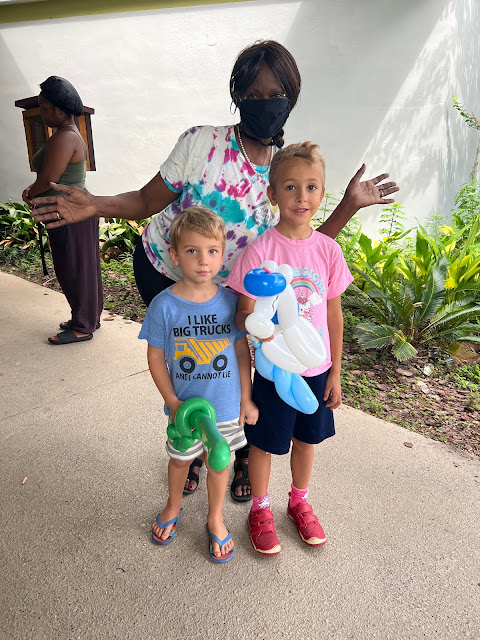 Yes, Levon's sword is a trifle, uh, phallic, but the unicorn was a work of art. While we were there a local pastor came by and chatted with everyone and did a little filming for I-don't-really-know but he got me on camera saying that Terez is a wonderful and helpful person who is there for everyone. This was definitely NOT your run-of-the-mill white Methodist minister. He was about as tall as Terez, dressed in a very cool Jefferson County t-shirt and shorts, and was wearing the fanciest watch I've ever seen. His voice was booming, his presence was huge. He was handsome. I can only imagine that he has a very large congregation and I bet you anything the man can sing.
Since the rest of the family hadn't gotten to Monticello yet, Jessie and Levon and August and I went to the antique store where I was determined to buy that doll. I went straight upstairs and got her and took her down to the desk. I said, "Okay, this poor demonic, neglected child has been here for over a year. What will you take for her?"
It's one of those antique stores where different venders have their own spaces and so they had to call the guy. He said, "Twenty bucks."
I asked the lady if she thought he'd take fifteen.
"I will," she said.
I was a bit confused but what she meant was she didn't care what the guy wanted, she would be happy to get fifteen dollars for the poor, demonic, neglected child. So I paid fifteen dollars and the baby doll was mine.
Jessie immediately suggested "Dorothy Anne" as a name for her which I think suits her perfectly. In fact, one of my favorite dolls I had as a child was named Dorothy. And so, Dorothy Anne she is.
We left the store with her in a plastic bag and Jessie said, "You can't put a plastic bag on a child's head."
"I know," I said. "I'm taking it off as soon as we get outside."
And I did. I showed her to August. "She's creepy," he said.
"She's just had a hard life," said Jessie.
And then Dorothy Anne waited in the car while we met the rest of the family at Wag the Dog.
For any of those of you who are newish here, Wag (as we call it) is a thrift store in Monticello whose proceeds go to the local animal shelter and there are some very fine bargains to be found there. We all got something, I do believe. The kids got toys. Lauren got two guitars, one of them pink. August's choice was a private unicorn diary with a key to lock it with. He's really into unicorns these days. It was still in the packaging. Maggie got a giant multi-color-tipped pen that actually writes. Gibson got a Lilo stuffed animal, and so forth.
I found a down comforter that is in the dryer right now. King-sized! It's rather light-weight which is just what I wanted. It's in beautiful condition. I also bought a purse which I have no need of whatsoever but it's cute, a very old handmade baby dress, and a pillow to go on the porch swing which is in the dryer with the comforter.
It has a unicorn on it.
And then on to the Mexican restaurant! 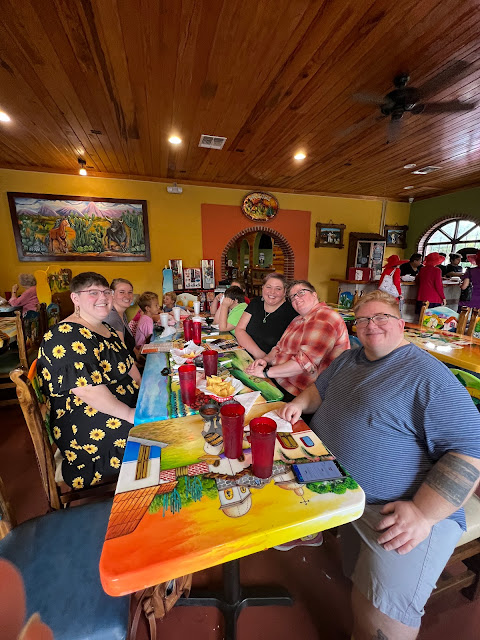 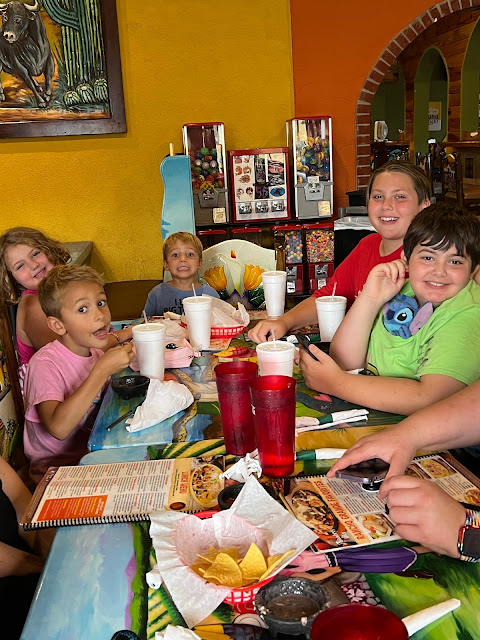 A delicious lunch was had by all and then we did the traditional many, many hugs and went our separate ways. Before we left town, I took a picture of the windows of the office of the Republican party of Jefferson County so that I know who not to vote for in this election. 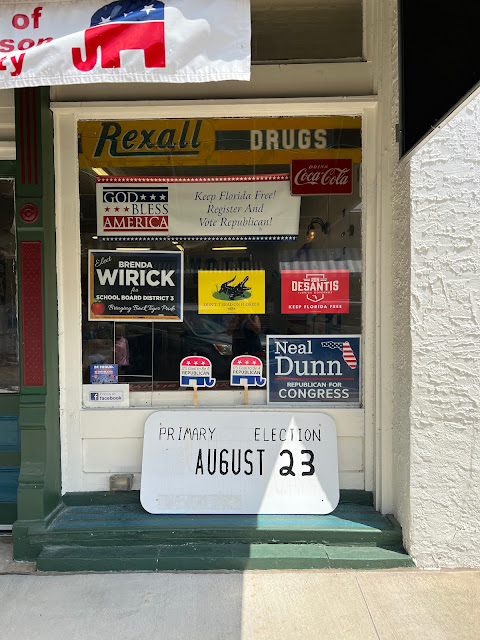 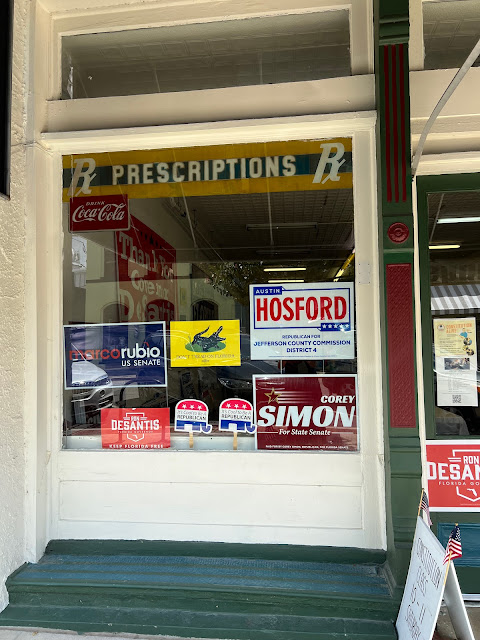 I need to go back to town next week to early vote.
Want to see what Mr. Moon caught last night in the fox trap? 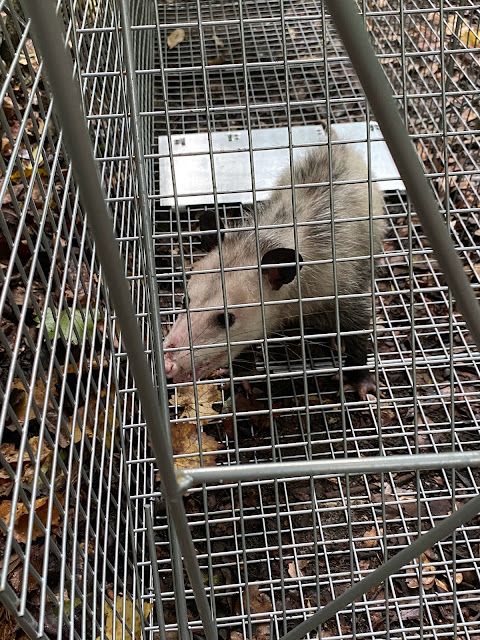 A juvenile possum.
Tonight I'm thinking it will be a raccoon. But who knows? We may go through the entire possum family before we get one of those.
And yes, he was released.
So like I said, it's been a wonderful day. When Owen hugged Levon good-bye he said, "I love you, Levon," and my heart just swelled with the sweetness of it. I am so lucky.
Here's what Lisi looks like wearing the dress I bought today at Wag. It is too big but still, it looks lovely on her. 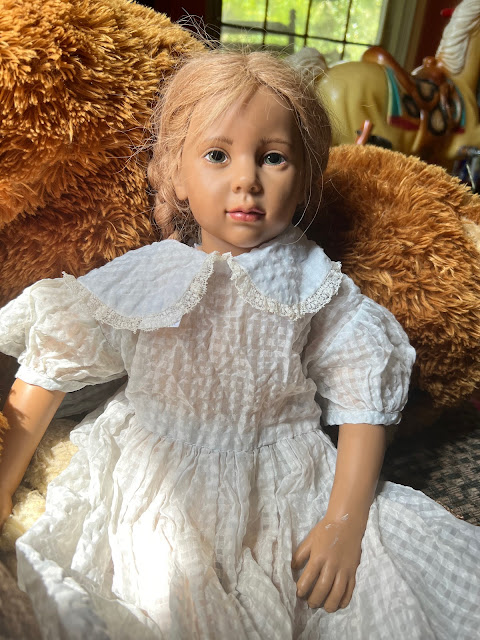 Y'all. I have a great fear that I am becoming obsessed with dolls. As I told Jessie on the way home today as I held Dorothy Anne on my lap, "Well, I am truly an old woman now." 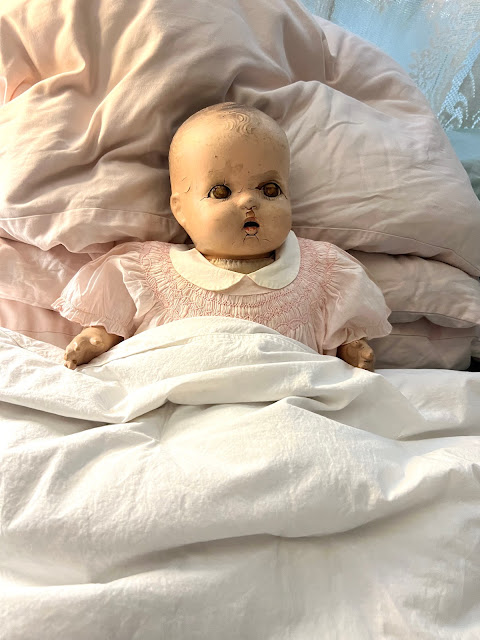 Here she is under the new comforter. I think she is amazed.
Love...Ms. Moon