No Tears And Very Few Fusses 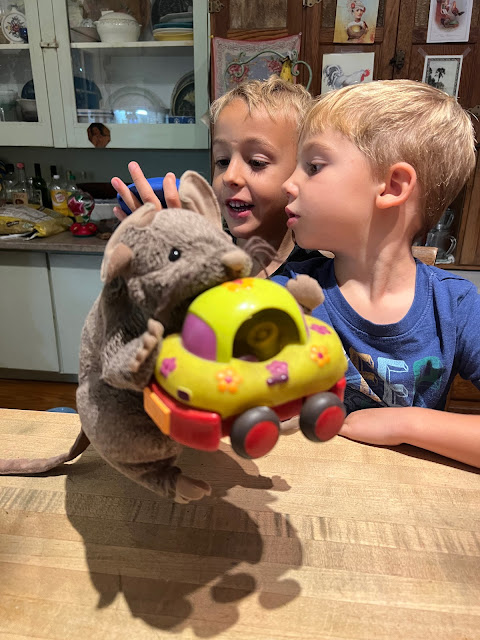 These fine young men who, in that picture were waiting on their purple cows, have returned to their own house with their mama who came to fetch them this afternoon. Levon is playing with Ratty, as you can see, who is playing with a car. I cannot imagine a time when Ratty will not be here, just waiting patiently for someone to pick him up, slip a hand inside of him, and bring him to life again. He is a most clever puppet.
What August is holding and what has both of their attention, is a very, very old little slot-machine game that Glen found when he was looking through his stuff. It still works and August, especially, was fascinated by it.

I think they had a good time, even though at one point Levon told me that he didn't know I was such a mean MerMer. I forget what it was I wouldn't do. Perhaps read a specific book that instant. He got over it. He's so funny and I love his ability with language. We were talking this morning about the fox that we have now gotten on camera, running about the yard. Mr. Moon wants to trap and relocate it and I'm not sure that's even legal but for a moment Levon thought we were talking about killing it and said, "Killing something is so rude!"
We explained that no, we weren't going to kill it but the fox was quite rude in that it has been killing our chickens. Glen was wearing a sort of Hawaiian shirt that had some billed fish on it and inspired by that, the child said, "I know what you could do. You could catch a sword fish and then use the sword to kill the fox. See? There IS an answer." 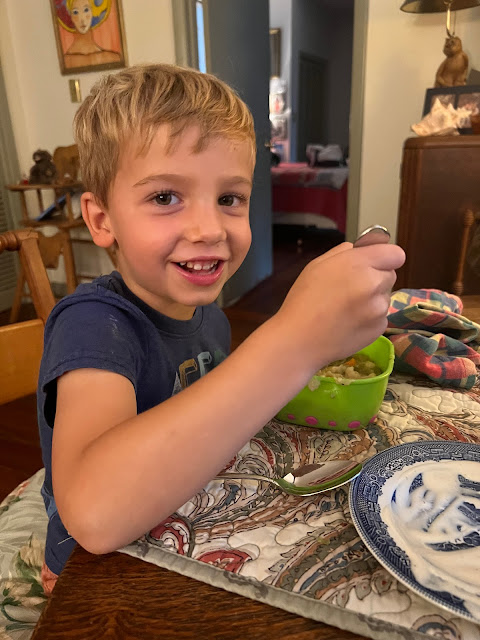 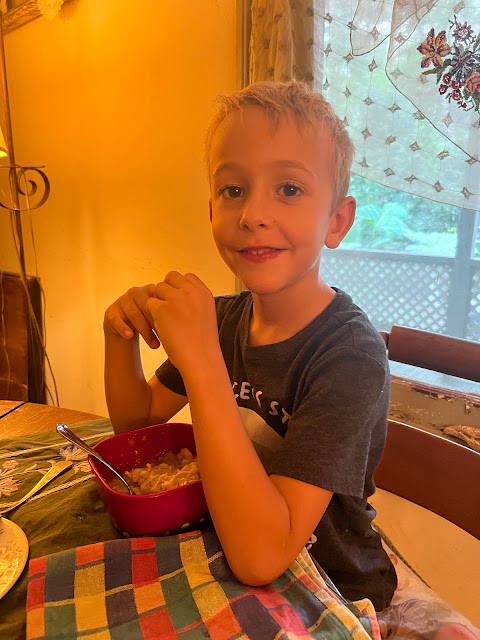 As did the cucumbers with ranch dressing. It is a pleasure to cook for them. August ate two servings and this morning, the child ate FIVE pancakes, two pieces of bacon and some eggs. And these were not lightweight pancakes. They had oat bran, apples, blueberries, banana, and pecans in them! How I wish I had his genes! We discussed the fact last night that all of my grandchildren are going to be taller than I am. He said, "You are sort of short, Mer."
I agreed with him that I am. Especially in this family.
"But you aren't the shortest woman in the world," he said.
Again, I allowed as how that was true.
They went to bed so sweetly last night. They took a shower and got a little wild but not so wild that they wouldn't get their pajamas on. They got in their bed and we read a few books and then I said, "Well, that's enough. Time to go to sleep." They protested the tiniest bit but not enough to matter. I tucked them in and kissed them. Levon was a little worried that if he needed me, he would not be able to find me. So I let him get up and showed him the route (which he knows quite well) and assured him that he would indeed find me and August told him that he could wake him up and he'd take him to my bed.
Back under the covers they both went and fell asleep almost immediately.
Levon managed to find me easily this morning around 6:10. He knows that he can come and snuggle with me which is what he does with his mama too. So into the bed he came and I cuddled him up and he was very still and very quiet and I sort of dozed until about seven when August came in and announced that it was now morning and that it was time for TV. But first he got in the bed too and we all snuggled and then Boppy woke up and everyone got kisses and he took them off to yes, watch TV and fall asleep in his chair and I did what I always do in these circumstances which is to fall immediately into a deep and dreamy sleep for a very long time.
Perhaps all of that snuggling is therapeutic for me. It must be.
The rest of their time here was spent playing games and reading books and eating MORE FOOD and playing Wii with Boppy. When it was time for them to leave, I told each of them separately that I had something I wanted to tell them.
"What?" they asked.
"That I am so very proud to be your grandmother."
Both of them had the same reaction which was basically, "Yeah? And so?"
A grandmother who is proud of them is one thing but a grandmother who gives them M&M's when they leave is another and I am that grandmother too.
After they left, Mr. Moon said to me what he always says when grandchildren leave after spending the night which is, "Good job, grandmother!" and I say, "Good job, grandfather," and we are glad that at the very least we kept them alive.
And well-fed.
Love...Ms. Moon