No, I Did Not Get The Kitchen Floor Mopped 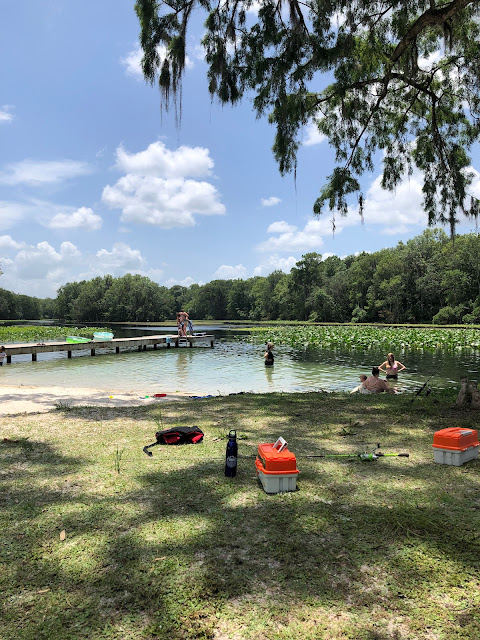 I took a walk this morning and actually got out an hour earlier than I usually do which did not help at all. It is seriously hot. It is getting to the brutal stage. It feels like an oven when you walk outside, especially if you're surrounded by asphalt, which thank god we're not, but it sure does make going to town even less an attractive prospect than ever. My weather widget says it's 96 in Lloyd right now with a "feels like" temperature of 109 due to the humidity.
Hellfire, Martha.

So after my walk I decided that today would be the day for me to drive down to the Wacissa. Mr. Moon was in town because he'd gone to the gym and then to Lowe's and I told him I'd wait for him to get home so that he could go with me. He said, "Sweet."
And just like that we were reminded that yes, we are sort of retired although we both seem to work as much as we ever did, and we can take off any time we want to which is indeed very sweet.

There weren't many people there when we got there and we didn't wait a minute until we dove in. I know I overuse the word "heaven" but how else to describe how it feels to immerse one's body that has been overheated to the core of it in such cold water?
Glory? Ecstasy? Oh-Jesus-Thank-You-God?
Yeah. All of that.
And then we sat in our chairs in the shade and both went in to trance states, just watching the water, the people, the sky. You know how much I love to people watch at the river. Tattoos and families of all colors and ages and babies and today there were some little guys fishing in kid-kayaks and one of them, who appeared to be about seven years old at the most, was one of the most serious and focused fisherperson I've ever seen. Mr. Moon was quite impressed too. We watched him catch a few little bream and were happy for him. He was way cool about it.

Okay. Holy shit. When I sat down to write this the sky was blue and the air was still and all of a sudden, a wind has kicked up and is twisting the trees into a frenzy and I can hear small branches cracking. Will it bring us some rain? I just checked my weather widget again and it's now saying we are in a severe thunderstorm warning and to shelter in place.
Huh.
Sounds like summer in North Florida to me. And now it sounds like summer in North Florida to me as the the thunder is beginning to rumble.
Oh, how I love it! I bet the temperature has already dropped five degrees.

Mr. Moon and I dunked ourselves in the water at least four or five times in between chair-trances and people watching. More and more people began to show up and so around three o'clock we left. There had been a bit of excitement when I suppose a gator was sighted off the dock as everyone clustered there to watch it. I was too tranced-out to get my ass up and go look. I've seen gators before and this must have been a small one because no one was screaming. Last time Lily and I were there with the kids, there'd been a snake in the grass that caused a bit of a stir but it was just a corn snake and it was left to go its way.

I am making a summer facsimile of Thanksgiving dinner tonight. I'm going to roast a turkey breast and make a green bean casserole with our own beans, of course, and an eggplant dish that tastes very like stuffing. Or at least my stuffing. Pepperidge Farm bread crumbs are involved in both. Please don't judge me. I love the stuff.

Well, here comes the rain. It smells so damn good. The trees are still dancing, the little birds are twittering like crazy, and the frogs are jumping in on the chorus as the thunder cracks the percussion track.

It's been a very, very good day and I need to remember that in all reality, Mr. Moon and I can take days like this whenever we want. And in fact, we should take far more than we do.

Okay. Lightening getting fierce. Rain absolutely pouring down. It's a freaking deluge! It's great!