I'm Not Titling This Crap

I swear- there is something wrong with me. I have become so incredibly on edge lately. Yesterday's debit card debacle was just one example of how I am not handling myself well. The level of tolerance I have for anything and everything has become lower and lower. I am snappy and cranky and churlish. Yes. Churlish. The least little thing can set me off and I want to scream and I often tear up when tears really are not called for.
This is not only not acceptable behavior, it does not feel good.

I ran a load of clothes today with no problem and then tried to do a load of whites. Somehow, something got pushed that shouldn't have and suddenly I was unable to choose a function on the machine or start it. I was getting a little orange icon that flashed, along with the letters CL.
WTF? I mean, really.
I finally got my husband's attention in between phone calls and he started pushing things and unplugging and closing and unclosing the same way I had just done and that made me want to shriek.
"I've already done all that!"
"You need the instruction manual," he said, quite reasonably, "to see what this means."
"I can't find it!"
So then we both started looking up shit online and he figured out that I'd somehow activated the child lock and according to Those Who Know, you simply had to hold the child lock thingee for three seconds but where was that? What was that? It was NOT the orange flashing image which, it turned out, was indeed a lock as depicted by an alien. I finally discovered where it was via an online help page and yes, within three seconds, all was clear and I was able to perform the holy task of bleaching shit again.
But I didn't handle it well.

I hung the clothes on the line and of course I got bitten by another yellow fly. Since I was having such a great day I decided that I would finally get two things in the mail that I have been putting off because I have some sort of weird mail neurosis. I remember a boyfriend I once had who was unusual in some ways, not least of which was that he made his living selling drugs, who had a huge struggle with mailing things. Even things like a letter to his parents who thought he sent them to Europe on the money he made working at a sporting goods store. I thought he was nuts. Okay, he was. BUT- I couldn't understand his weirdness about postal service.
Now I do.
So anyway, I got what I needed to pack up packed up. I got the other thing I needed to mail ready. I went to the post office. I mailed them. And I should feel so relieved but I don't.

Here's what I did the rest of the day in pictures: 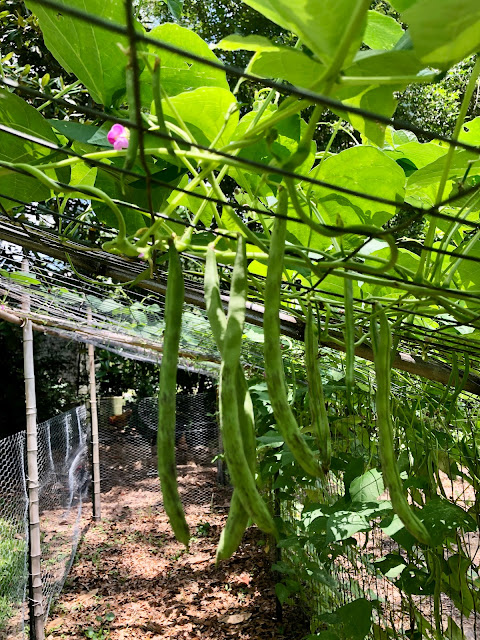 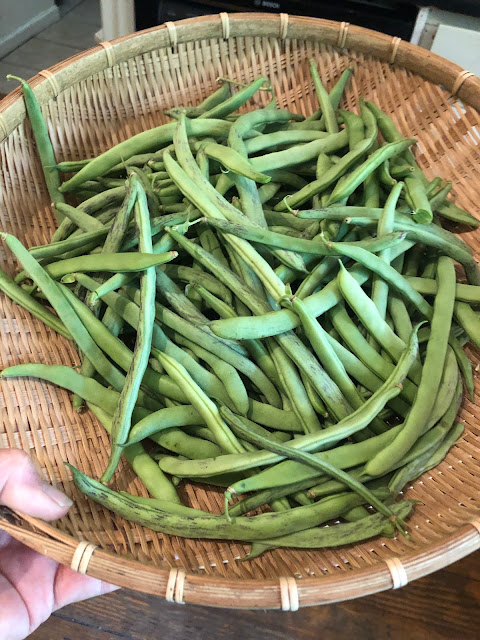 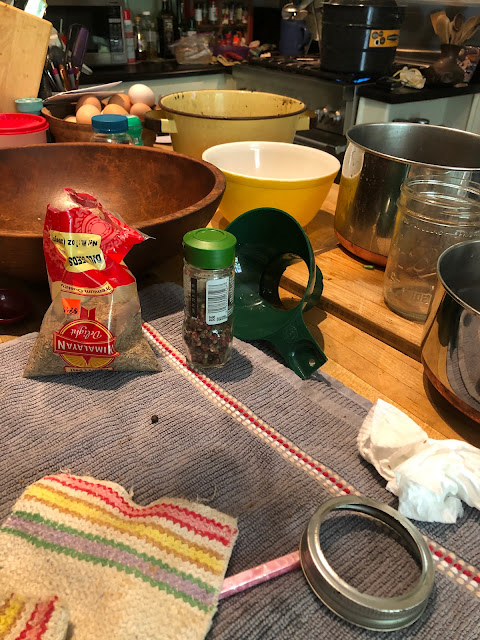 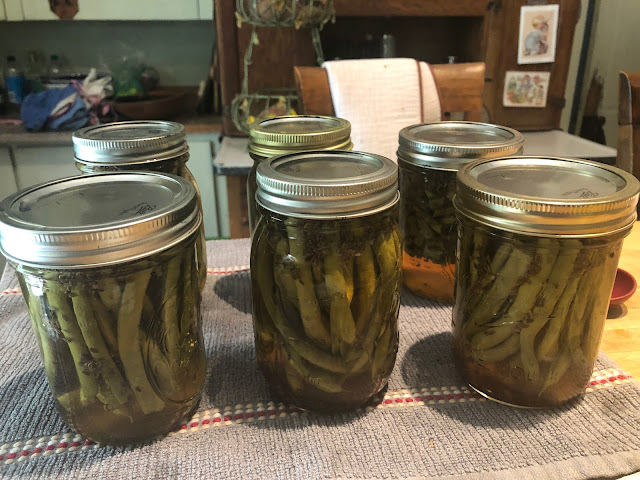 And even though every lid has sealed with a reassuring pop, I do not feel my usual sense of satisfaction. I'm just worried that there's too much salt in the brine and not enough sugar.
Eh, it's all probably just some sort of Mercury-in-retrograde-summer-heat-yellow-fly-toxin-doing-too-much-shit situation.
It is whatever it is in this case and I'll just ride it and try to calm down. A trip to the river is obviously in order but I don't see where in the schedule of the next few days that'll fit in. We shall see.
Meanwhile, I'm off to scratch the yellow fly bites I got taking IN the clothes which have made my foot swell like a puff adder, and make supper.
I'm sorry for all the whining and whinging. I absolutely know that I am beyond fortunate in all regards and that there is nothing I am going through that is in the least bit truly painful.
Which only makes me feel guilty and more like crying.
On the other hand, I could watch this all day.
If you invent it, you can do it as long as you want to.
Oh hell. Jack just puked on the floor.
Love...Ms. Moon
Posted by Ms. Moon at 6:29 PM