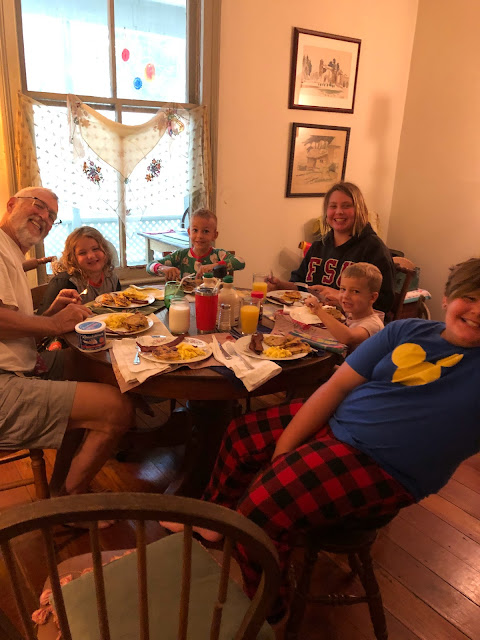 It's so funny to me that the table we crammed seven people around this morning is the same table I bought with my first husband in Thomasville, Georgia in about 1979 and which has been with me ever since. It is the table on which my beloved friends from nursing school and I studied in the early eighties. For awhile, in a house that we lived in when all the children were at home, that table sat out in a sunroom because it got too crowded for all of us and the extras that seemed to constantly find their way to our meals. The table we bought for that dining room is the one I'm now using on the back porch and most of my posts come from my MacBook which is perched on it and the round table, the oak table, is back in our dining room and at service again.
Another funny thing to consider is that when Mr. Moon asked me to dance with him at a bar in Tallahassee the night after Thanksgiving, 1983, I never once had any premonition that thirty-nine years later the table that my friends and children and I ate on and studied on and played games on would be filled with grandchildren although I did have a feeling in my very bones after the second time I saw him that he was going to ask me to marry him. And seven months later, he did.

I wonder how many pancakes I've served on that table now.
A lot. A heck of a lot.

The boys were so good last night. They slept in the big bed in the guest room instead of the fold-up beds laid out on the floor of our room which was truly a big boy thing to do. We read three of our favorite books including The Little Red Hen Makes A Pizza, of course. I scratched Levon's back for a little while until he was just about asleep and then scratched August's. I switched over to sort of gently scratching his head for awhile and he got so relaxed. And then he said something to me that about made me cry. It seemed to come out of nowhere.
"When I was little, I used to feel like I could fly," he said.
"Oh, August, that's so beautiful and wonderful!" I told him.
And then he fell asleep too.
I hope I never forget that.

This morning came bright and early when Lily brought her three over and the pancake making began. After that, the action never stopped. They ran all over and around outside this house playing hide-n-seek and they helped Boppy hook the trailer to the 4-wheeler and all rode to the dump in that trailer. Owen assured me he would hold all of the children tight. There is a grill around the trailer and although my grandmother heart wasn't fully into the idea, I figured the block and a half they would be traversing would be okay. And it was.

Owen and his grandfather did what they had told me they'd do which was to put the heavy plants back on the porch which was a lot of work. That made me so happy. 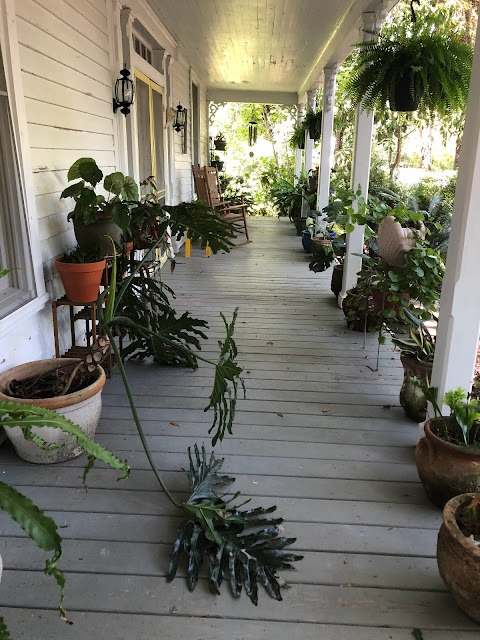 My porch jungle has been restored!
The kids and I all played a game of Yahtzee together. Levon and August were on Owen's team, Gibson was on his own team, and Maggie rolled the dice for the lady team. 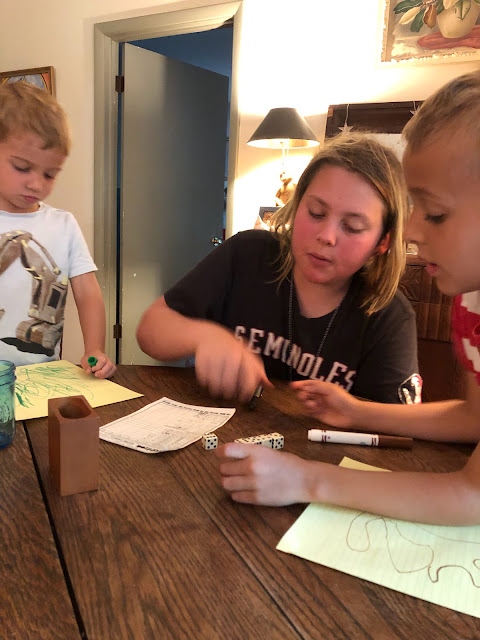 Owen is so good and so kind to the younger children. And so helpful. He's just the sweetest boy.
Before too long, the game sort of segued into a drawing session. 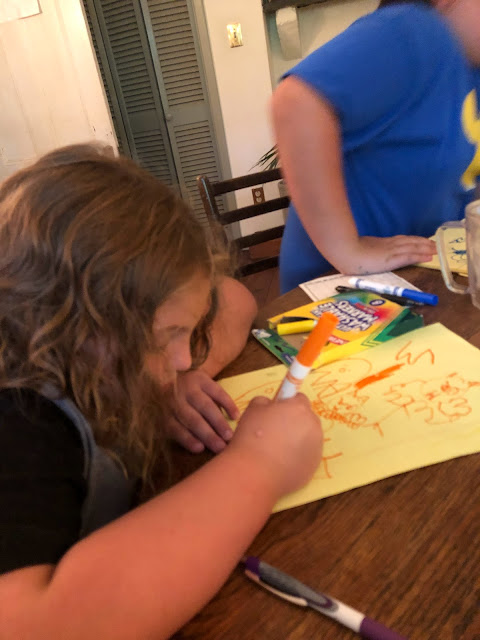 Owen and I continued on with the game and he whipped my ass. I thought I had him when I got a Yahtzee but then his faithful teammate, August, rolled one too.
Dang.
Lunch was leftovers and then there was more playing and then the mamas showed up to pick up babies. What a day!
Saying good-bye to Jessie and the boys was hard because I won't see them for over a month as they are heading out tomorrow for North Carolina. August and Levon are so excited. And I am excited for them. I can't imagine anything better for that little family than to go spend summer on the mountain with Vergil's family. The mountain family.
Ah, sigh.
We'll be leaving to go visit before you know it. But it is always so emotional for me to hug them good-bye when they leave.
Since everyone took off to go home, I've gotten the house mostly tidy again and swept a lot of rooms. The kitchen has been trashed and cleaned up twice today already and thank god for the dishwasher.
I found this little scene on my back porch. 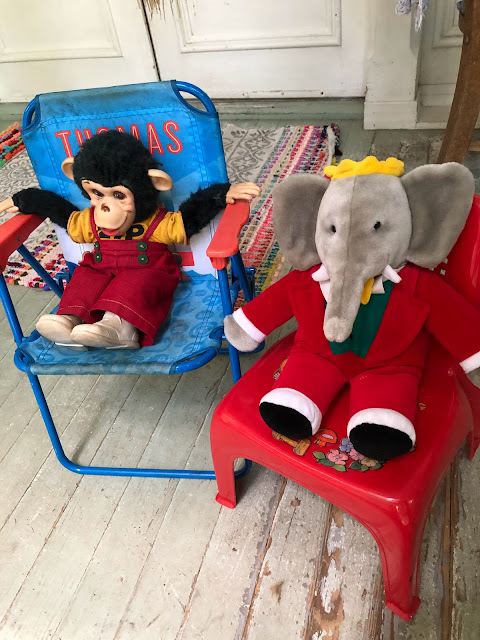 Oh, Magnolia June! She had asked me if she could play with Zippy and I told her she could. "Has he been good?" she asked me.
"Oh yes," I told her. "Zippy is always good." Then I thought about it a second and said, "Well, he is a little mischievous sometimes," which I am sure he would be if he were a real chimpanzee.
So. Friday night and all is peaceful and quiet again where just a few hours ago there were screaming, laughing children running about, slamming doors, forgetting to close doors, me yelling, "You're letting out all the cold air!", closets and showers being hidden in, kids asking me repeatedly if I'd seen whoever was "it" and also, "Where is Boppy?" (Possibly hiding.) There was also piano playing and composing. Maggie played some lovely "ballet" songs (as she told me) and later she asked if listening to them had made me cry.
She is so dramatic. I love it.
I told her that the songs had been very sweet but no, I had not cried. I should probably have lied.

I'm having my first sip of a Friday martini and all is calm in my back yard where the birds are coming in to the feeder and the chickens are eating the seeds on the ground that the birds kick off. It is quiet and we will sleep well tonight even though once again, I did not get around to washing sheets.
Tomorrow.
While we were getting the porch in order, Mr. Moon said that he'd clean my silver gazing globe for me but Owen offered to do it instead. Levon, who has a huge big-cousin crush on his oldest cousin, wanted to hold it for Owen and he did. 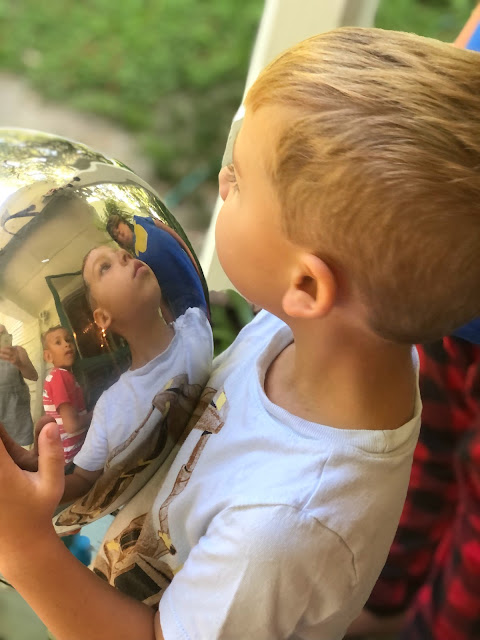 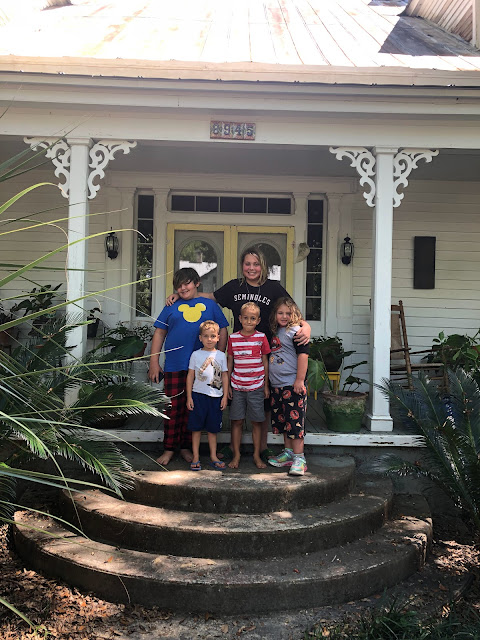 I wish they all could feel like they could fly forever.
Happy Friday, y'all.
Love...Ms. Moon