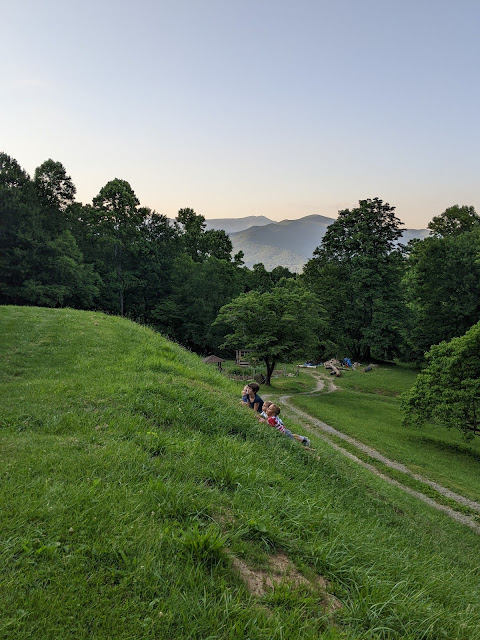 And there they are- the mountain kids. Jessie said that they are already back to being a pack of wild dogs. In that picture, they were trying to sneak up on a groundhog. Isn't that the most beautiful place? The Great Smokey Mountains. And I hear it's cool. Like you-can-cuddle-cool.
Meanwhile, this is the season in Florida to wonder why the hell we live here.

I had a small breakdown today. I took a walk and that was bit of hell but I survived it. I got a package in the mail with two pairs of short overalls I'd ordered from Duluth Trading Company. I've always admired their overalls but they're really expensive so when these went on sale for half price I threw caution to the winds. As I told Jessie in a text, they are butt-ugly on me but they are comfortable, practical, and very well made. I am pleased.
I also got my new debit card in the mail. It had expired at the end of May and the credit union we go to has merged with another credit union and they were actually closed for a few days to make the transition and have been swamped since the change-over and so I've put off actually dealing with the debit card issue for about a week. I was convinced that it wasn't going to show up at all so was very pleased when it did. I thought it would save me from making a trip to town to get a new one.
Hahahahahahahahahahahahahahaha!
I merrily called the activation number, as one does. The first call I made had such a bad connection that I could not possibly understand the person on the other end. So I hung up and called again. This time I got through the exercise in card activation up to the point where a real person had to verify my identity. I was to receive a text with my code on it. Unfortunately, the phone number they had on file for me is my landline WHICH YOU CANNOT SEND A TEXT TO!
Duh.
The guy told me that he could not change my number and that I had to go to the credit union and get it activated there and have my number changed to my cell phone. He could not do that.
Are you with me?
So. I take a shower and get dressed and drive to town and go to the credit union where one man is practically cussing out one of the ladies trying to help him and there are people waiting in line. After about twenty minutes of that, I got to talk to a woman who could indeed change the phone number on file for me but she could not activate my card despite what the man on the phone had said. I needed to call back the activation number. By this time, it was pouring rain so I ran to my car and not having been born yesterday, I called the number while still in the parking lot. I got another person who told me that my new number must not be in the system yet but no worries- I could verify by giving him the last four digits of my SSN.
Okay.
But no.
I could not. Because they didn't HAVE my SSN on file. They had my husband's. Despite the fact that we have been married for thirty-seven years, I do not know that number. So. I called Mr. Moon, practically in tears. He used to have an office in that credit union from which he sold cars.
"Talk to Rebecca," he said. "She will help you."
But, but, but...I wanted to do this by myself. Like a big girl. You know? I got his last four digits and called the activation line AGAIN. By this time, they had kicked me out of the system and I could not get through.
Big girl was crying at this point. I was so frustrated.
I dried my eyes and ran back through the rain into the CU where more people were waiting. Rebecca has an office but I wasn't sure which one so I had to wait to ask.
Which I did.
And when I finally got to that dear, wonderful woman, she figured it out and I am activated. I truly did well up with tears when I thanked her.
I am BONE FIDE again!

And that shit wore my ass out.

Luckily, supper will be a breeze tonight. I made a very fine pot roast last night with potatoes, carrots, green beans, and onions from the garden. Tonight it will take a new form as vegetable soup with a few added peas, baby limas, and corn. I made up the dough for a loaf of sourdough last night and it is about ready to go into the oven and the soup is simmering.
What more could anyone ask for?

Here's a picture of Darla's three children taking a dirt bath. It's a terrible picture because they were lying in a band of shade and if I'd gotten any closer, they would have moved. 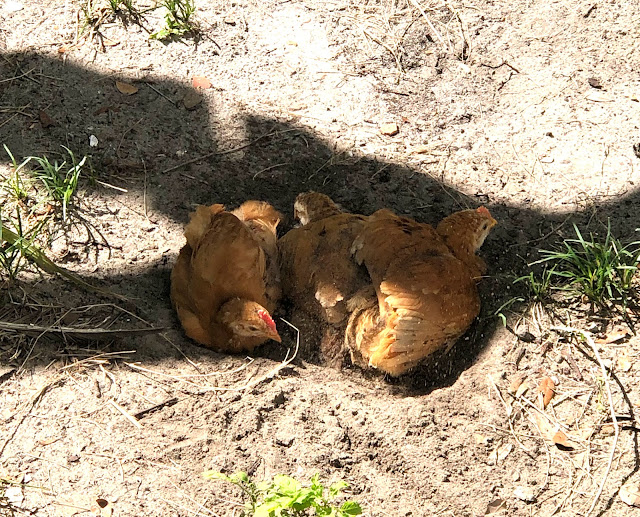 But you can sort of get the idea. They spread their feathers out and use their wings to scoop the dirt like we would splash in the water. There's a nice little article about that practice HERE if you have any interest. It is one of a chicken's true requirements and I feel so sorry for the birds in captivity who are not given the opportunity to enjoy that particular activity. The other day when it had rained, some of the chickens were on the kitchen porch and Mr. Moon and I watched as Liberace fluffed out his neck feathers to dry them and then began preening. He is such a handsome bird with his shining golden feathers. They actually gleam in the sunlight as if they had been oiled.

I swear to you- tomorrow I am not leaving Lloyd unless Keith Richards invites me to join the band family in Liverpool next Thursday in which case I'll have to catch a plane.
Here's a great Billboard article about how the Munich gig went last night.