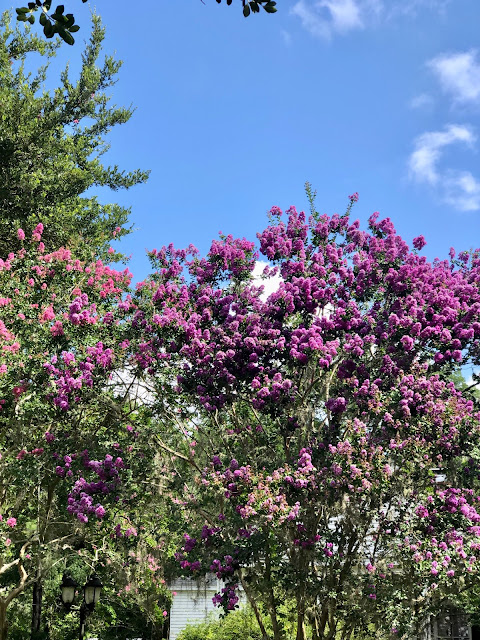 So after bragging about the glory of the crepe myrtles this year, I took that picture this morning and it looks like it was hand-tinted by someone not very enthusiastic about color but trust me- in real life it looks much more vibrant.

Humidity back up to the upper 60 percent today and temperature back up into the nineties so of course I decided to take another walk after yesterday's pleasant experience and I chose to walk down to Lloyd Creek Road which is lovely and shady once you get there but hell on this earth when you're on the road to it. When I started out, it was a bit overcast and I thought that would help but the clouds saw me coming and said, "Hey! Let's get out of the way! This woman needs heat stroke!"
Or something.
But I did it and discovered when a friend texted me that there was a special Jan. 6 hearing today starting at one so that gave me a great reason to go sit down for a few hours which was heavenly. I started patching a very, very old favorite blue linen shirt but it's a wonder I got anything done on it. The witness today was a woman named Cassidy Hutchinson who somehow had an entire political life in the White House before the age of 26 which is how old she is now. She was top aide to Mark Meadows who was Trump's chief of staff for a few years and my take-away from her testimony is that as crazy as we all knew that 45 is, we now know that he is a true and genuine madman.
Look. I can't even begin to go into it all but if that man isn't hung for treason there is no justice in this world. As I keep telling my husband- I do not believe in capital punishment but in this case I will make an exception.
Okay. Not really. I truly do not believe in society's right to kill a human being but if anyone deserves it, it would be the man who brought this country to the brink of an overthrow and whose presidency will be a curse to this nation for decades after he lost the election in 2020.
You know what I'm talking about.

So. That was an interesting afternoon. I can't believe I still have the capacity to be shocked by these reports of his actions and behaviors but I will admit that I am.
The thing that scares me is that Trump's supporters are going to take this testimony which includes him trying to grab the wheel of the presidential limousine (The Beast) to force the driver to take him to the Capitol to meet the rioters and urge them on, as proof that he was willing to do anything to keep his promise to be there with them as they stormed the Capitol. With weapons. That he knew they had. That he obviously encouraged them having. And to possibly murder Mike Pence.

It's all just so unbelievable.
People ask me why I'm watching these hearings and all I can answer is, "History." This all makes Watergate look like bird poop at a picnic. And that was bad.

Tomorrow is Mr. Moon's birthday. He claims he does not want to acknowledge it. "It's just like any other day," he says. But- hey. I want to celebrate the birth-day of the man I love. I've made three layers of a German chocolate cake today and will make the sinfully, beautifully decadent filling tomorrow. I had forgotten how many steps there are to German chocolate cake. Chocolate must be melted, of course (and I always use twice the amount the recipe calls for), the eggs separated and the whites whipped, the flour and baking soda and salt sifted before adding to the creamed butter and sugar and egg yolks, and then the egg whites folded in. I made him the same cake the first year we were together. We were staying at the beach with his parents, his sister, her husband, their children and Hank and May, and I was overwhelmed, truthfully. But his parents were so very kind to me and I will never forget how, while I was making this complicated cake in a rental kitchen, his daddy put his hand on my shoulder and said, "Thank you for giving our son back to us and making him so happy."
I think that Mr. Moon's first marriage had been a bit difficult for their family. And it was on that trip that I saw how Glen's daddy treated all of the children as if they were blood-kin, mine and Mr. Moon's sister's step-daughter. No difference. And I knew that he had told Glen when we first got together that it wasn't enough for him to fall in love with me. He had to fall in love with my children, too.
And that is what I think of when I make German chocolate cake.
Food is not only love, it is also a conjurer of memory.

I think we're going to meet up with Lily and her kids at the river and he's talking about taking the kayak. That'll be sweet. We can all eat cake and swim and paddle about and take a day off to honor the man who is husband, father, grandfather.

I am looking forward to it. I hope my husband is too.