Trying To Stay Afloat In A Dark Stormy Sea 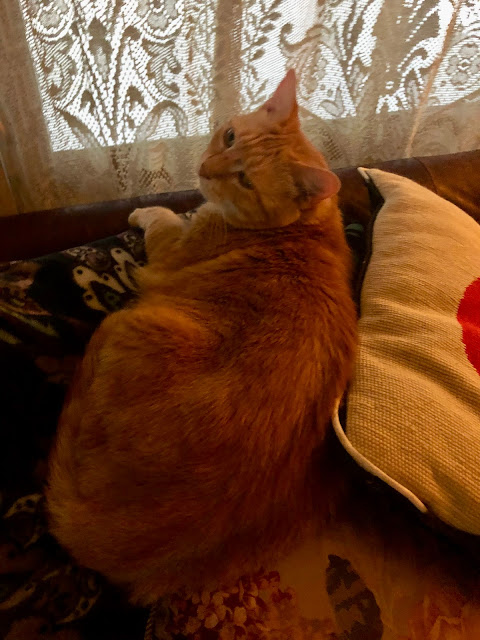 There is a picture of my cat. She was sitting at the other end of the sofa from me as I stitched two pieces of knitting together to make a strong, heat-proof potholder which I cannot deny looks like the handiwork of a twelve-year old.
Maurice, as crazy as she is, knows me and I think she is aware right now that I cannot deal with much interaction with other beings, even feline ones, but that I do probably need some sort of companionship.
Yesterday in my grief and disbelief fog, I decided to tidy and sort my "work area" which is the end of the couch and a table beside it where I keep my embroidery and knitting and crocheting and mending things. Yarns and floss, scissors, pins, needles to sew with, to knit with, to crochet with. Things were all a-tangle and a confusion of random bits and pieces and skeins and balls and I tried to make some sense of it all. While I was at it, I decided that it was time to get rid of the big green laundry basket in that corner I've had since Owen was a tiny boy which has served as a toy basket so I went through things in it and threw out a few things and could not bear to let go of a few things, which I then put in a large shopping tote and put in front of the fireplace with the Lincoln Logs and the Fisher Price farm.
I wiped out the basket and it is now in the laundry room where I suppose it belongs. I remember Owen playing animal in that basket, he was a jaguar in a cage and would escape and scare me to death. That was his joy, pretending to be a wild and scary jaguar, running the length of the hallway on four legs.
So that tiny piece of my life was dealt with as I was not capable of doing much else and I will admit that it is a comfort to see order in a place where there was none before.

Today has been much like that except that my tidying was done outside. We did get rain yesterday evening. Great buckets of it and today has been so much cooler. Tomorrow it's supposed to be back in the high nineties again so I knew that if I wanted to get anything done in the yard, today was the day and so I cleaned the hen house and then I spent a few hours kneeling in the wet dirt, weeding okra and beans, pulling plants by the root, digging up the ones that didn't come easily, and for the first hour or so I sweated like it was a hundred but the humidity was very high and then it began a light misting rain and I worked on through that and was more comfortable.
At least you can see where the okra is now, although it surely isn't doing much.

I came in, shucked my overalls and threw them over the new deck railing in hopes that the rain would wash some of the dirt off them before I put them in the washing machine. And then I took a shower which got perhaps out the outer coating of grime off me and then I sat down to watch mindless TV and stitch.

I've read the same memes on Facebook over and over and I've read so many positive posts suggesting that we can overcome this, we can change things again and all they do is exhaust me. I do not have a naturally cheerful or optimistic outlook and yesterday's supreme court ruling seems to have crushed my very soul to the point where I can barely raise any anger. I am indeed in despair and even wrote a friend that I feel as if all I can do is to keep my head down and live out the rest of my years which I know sounds horribly dramatic but that too, is who I am. I know that there are things I can do besides vote, like donate money to good organizations who are fighting the good fight, who have been fighting the good fight, who will continue to fight the good fight.

I think the thing that has affected me most deeply is the knowledge that the supposedly supreme court of the United States of America has said quite plainly and without apology, that women are not equal to men, that we do not have the same rights, namely and especially, the right to have autonomy over our own bodies.
We are, once again, reminded that we are naught but chattel, our very lives dictated by rules created by the white, Christian patriarchy who believes (theoretically) in a white, Christian god who is most definitely male.

A woman I know from absolute years of blogging and whom I respect, posted on FB that we need to let this ruling radicalize us rather than lead us into despair. I replied that I was radicalized fifty years ago and now I am just tired. 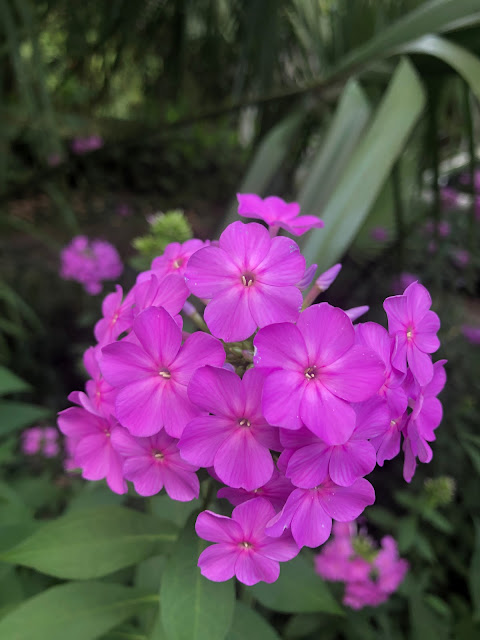