Well, At Least I Got SOMETHING Done 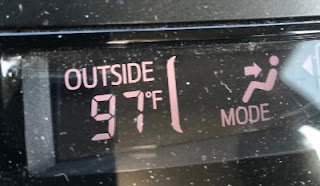 Yes. Yes. I do need to dust my dashboard display. Guess what? Not happening. Especially when the temperature is 97 degrees F. And actually, I may never need to clean that car again because my husband, aka The Car Guy, bought a new(ish) Prius today that he fell in love with and so we're keeping which means that my Prius which I would happily drive for the rest of my life, will be sold.
And I need to confess that I almost never (if ever) clean my car. I don't let trash accumulate in it or anything like that but I don't clean it in the traditional sense. I don't even know why Mr. Moon bothers to put me in newer cars. And it's stressful when he does! What if I bump into something? What if it gets scratched? What if...oh I don't know.
But it is a beautiful car, the new(ish) one. It's pearly white. My old one is red so that'll be a big difference. I'll probably not be able to find it in a parking lot for at least a year.

Goodness! It's been a big day around here. For one thing- I'm drinking my martini alone. Mr. Moon has taken off for the island where he has some repairs or something to do and is going to go fishing with some friends but in his own boat. He was so happy, getting ready to go. He asked me if I wanted to go with him but, eh- not this time. It is strange though, being alone after all these months of not being separated. I'll probably survive although I will miss him. He says he'll miss me but I think he's missed going fishing more.
I spent a good part of the morning and early afternoon busy as a little June Cleaver bumblebee. Can't you just see a bumblebee wearing a modest string of pearls around its neck and with an apron tied around her waist? I can. I cooked him some field peas and rice that he can heat up for a meal and I made more pimento cheese and also, because I am the BEST WIFE IN THE WORLD, cookies. Oatmeal, raisin, pecan, chocolate chip.
Fishing health food.
I also made six pints of bread and butter pickles. That's what they looked like in their pickling syrup. I am a bit worried as I think the extra hours I left them in the refrigerator with salt on them probably made them far saltier than bread and butter pickles should be. As I told a friend- I shall just call them "stroke pickles."
Oh, sigh.

Anyway, all of that took me quite awhile and of course there was the ritual washing of the bedding. And when all of it was done and Mr. Moon was loading up his truck and boat I left to go to Publix and Costco. Costco's parking lot was not very full but the lines were long. I did not buy one thing that was fun. Not a toaster oven or a new fan or a diamond necklace. Just batteries and Honey Nut Cheerios and lemons and limes and stuff like that. People were masked and a few were actually covered head to toe in various outfits, some involving camouflage.
This IS the south, y'all.
Then on to Publix where I had a moment of silence in the breakfast foods aisle, remembering my great blow-out last week. No one incurred my wrath today and so it was all fine. I was just sort of depressed and didn't buy anything fun there either. Not even a mango. But I did get to see Lily and she walked me and my groceries out to the car and we had a little chat and I kissed her back and patted her butt.
My new way to love on my babies. And it's better than nothing.

I let little Dearie out of the peep coop today to wander about with her mother. They left the coop entirely but right now I can see them by the door of the coop, mama and baby. It's probably stupid to do this because anything could snatch that child but I sort of have the attitude that even if Dearie's life should be cut way too short, she/he will have lived a free and fancy life, scratching in the grass and dirt for bugs and so forth, as chickens should do. And having only one bebe to keep safe, Dottie will protect her as best as a mother hen could. However, I think it is time for me to go interfere and chase them into the hen house. The sun is getting very low into the sky and it is about to be hawk-feeding time.

I sure do hope that Jack comes to join me in bed tonight because otherwise, I truly will be lonely. I have been thinking a great deal about the intimacy of two people laying down to sleep together- and I do mean sleep. The deep trust and peace of it as we drift into and out of that intensely vulnerable, private, and somewhat magical country which borders both sleep and awareness. Somehow this seems to me to be even more of an intimate and trusting act than anything else we can do in bed. I could be wrong.