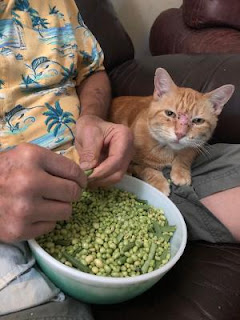 Mr. Moon has been shelling peas for hours. You can't imagine how long it takes to fill a bowl like that. Labor intensive, to say the least. Maurice is sitting beside him. She loves to sit with Glen in his chair as much as the grandchildren do and probably for much the same reason- she feels so safe there. She's probably safer sitting beside him than anywhere else in the world. As you can see from her poor nose, the feud between her and Jack is nowhere near over. And he's just so much bigger than she is. Every night when he comes and jumps on the bed with me (kaPLOMP!) and cuddles up I give him a stern lecture about hurting Maurice. And I feel guilty for letting him sleep with me because he is so mean to her. But I am a vastly imperfect person and I do love the weight of him beside me. When he wants more petting from me he gently, gently taps my arm, claws sheathed. He's gotten so large lately that I told my husband that one of these days he's going to jump off the bed or a chair or a table and just go right through the floor. When he runs in the house it truly does sound like a small horse galloping about. He's on the table in front of me right now. 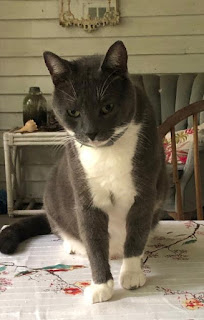 You can see the evil in his eyes. He likes the new tablecloth.

Gosh. It's the 4th of July, isn't it? Couldn't prove that by me. I haven't even left the yard so I haven't gotten into any trouble today. We haven't grilled anything or drunk a cooler full of beer or jumped off a high dive into a cold river or made or eaten a cake with blueberries and strawberries and whipped cream although I did finally make Mr. Moon's dessert and it is a thing of glory. We picked green beans together today and that took a good half hour or more in the hell-hot sun and every time I reached for another bean, my bowl already full, I would say, "This is ridiculous!" While Mr. Moon shelled peas I snapped beans and then I bagged them and put them in the freezer in the garage. There is still a huge plastic bag full of them. Maybe I'll pickle some more tomorrow.
Every day I have so many things I need to get done and I'm just not getting any of it done. Simply doing the small things that I do seems to take up my entire day and suddenly, it's four-thirty in the afternoon. I have not yet gotten a handle on this slippery time thing and I'm becoming aware that I'm probably not going to.
Oh well.

I see that 45 appears to want to base his campaign on statues and their preservation.
OUR HISTORY! OUR HERITAGE! OUR BIG HONKIN' WHITE RIGHTS!
The man might as well stick a big fat swastika on his MAGA hats. He really does not care, does he? And the damn thing about it is- if he did stick a big fat swastika on his MAGA hats his drooling idiot followers would shout, "Take my money!" and order them by the truckload.
Oh god. I could live for another hundred thousand years and not understand how that man got elected in the first place or how anyone could support him. I've said this so many times before but I'll say it again- I had no idea my country was filled with so many racist asshole below-average-intelligence shit heads.
And honey, I was not happy to discover this nor will I ever be.
The phrase "Putin's bitch" comes to mind but even if that's the truth, Putin didn't get the job of destroying our country done by himself. He had plenty of help on the inside.
But hey! There's hope! Don Jr.'s girlfriend has tested positive for covid but then again, so have 11,458 Floridians today!

Yeah, well, what more can I say?

Little Dearie is still alive. Darla continues to sit on her nest but I'm about to throw that egg out. I hope that no one in the neighborhood feels compelled to set off fireworks (now legal in Florida!) after ten p.m. and I hope that all of you are well, safe, and as happy as is possible under the bizarre and difficult situation we are all living in now.