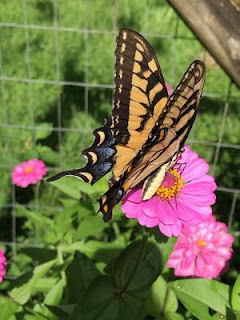 That's an Eastern Tiger Swallowtail that I saw feeding on the zinnias this morning. It was a little cooler when I went to let the chickens out and go water Mr. Moon's earth boxes in the garden. There was life abounding. I saw a Zebra Longwing butterfly on another zinnia 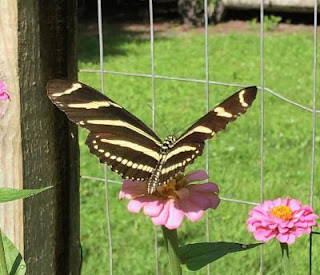 and a fine, fat bumblebee on one of the rattlesnake bean blossoms. He or she would not let me take their picture.

I sent out a text to the young'uns that I had extra limes and lemons, green beans and field peas if anyone was interested. Jessie texted back that she would love some limes and lemons and both kinds of beans. Could they come out?
Of COURSE they could. 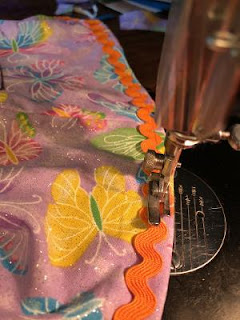 I found some rather odd and semi-hideous but interesting buttons in a box that Lis had given me. Perfect! 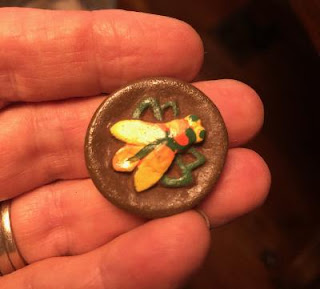 I was sewing them on the pockets just as they got here. August pronounced the dress to be exactly the way he wanted it. Which pleased me no end. I had apologized for the lack of sequins but I think the bug buttons made up for that. I asked him if he wanted to wear the dress and he said, "No, not now."
"Just put it on so I can see how it looks on you," I said.
"We'll send a picture," he said, and went off to collect books for me to read.
He's a crackie.
Levon was wearing a dress but not one I'd made. Jessie got it for him for about four dollars and it looked very cool and breezy. 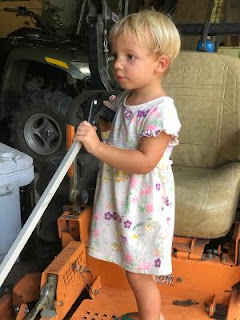 Perfect for a hot day exploring Boppy's cool toys in the garage.

We read a few books that they picked out. Levon had to find the dump truck book and the tractor book and also the Duck in the Truck book. We sat on the back porch to read them, two fans going strong. Then we had a little lunch. 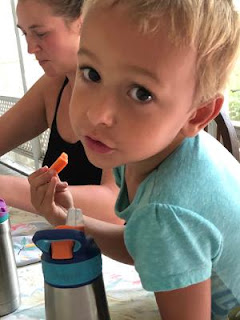 Look at those eyes.
It was so nice to sit and chat with Jessie and the boys. The boys had a lot to say. They generally do.

We all went outside to see if we could find Dottie and Dearie which we did. Jessie and I picked a few green beans, just for the fun of it, and we went over to see the goats next door. The chickens who live there all seem to be suffering from some sort of horrible ass-feather problem.
Ick.
While we were over there we found two perfectly undamaged small bottles lying side-by-side. That area of the yard was at one time the place where everyone dumped their trash and in those days, trash was mostly glass and metal and only the glass really remains. There are scores of pieces of broken glass and finding whole and entire bottles is a treat. I told Jessie she could have them and she took them home and had the boys clean them outside and sent me this picture. 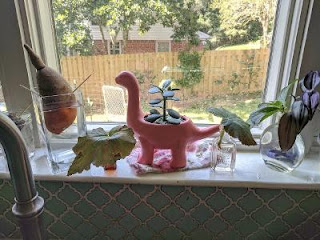 You can barely see the brown one (which looked to me to have once held paregoric or something of that nature) under the begonia leaf she's rooting in it but you can see the clear one. It once held Hind's honey and almond cream. It can't be really, really old because it had a screw top but after just a few moments of googling, I see that although the company started making the face cream in the late 1800's, they sold it well into the forties so it's got to be at least that old. Possibly eighty years old? Not worth much, as far as I can tell, but a sweet little bottle, another tiny bit of history. A woman who lived here cared enough about her face to buy and use honey and almond cream on it. I bet it smelled so good. A little bit of luxury here in Lloyd.

When they left, I traded the boys a cookie for a toe nibble apiece and sent them home with enough beans for days. And lemons and limes and a small rooted bit of lace-cap hydrangea and the bottles, of course. It had been a sweet joy to have them here.

I've had two calls from Mr. Moon. One this morning when he told me that he'd slept well and was going to get to some projects around there and then probably be home around four or five.
The second call just came a little while ago where he reported that obviously he was on "Glen Time" and had the boat loaded up and was about to cross the bay.
I had a feeling that this would probably happen. He is always quite certain that he can finish up a project in a few hours that will, in fact, take a day at least. This is better than what I do, however, which is to moan and bitch that something is going to take forever and thus, never even start it.
But no problem. I think I'll make some clam spaghetti and a salad and I can warm up the pasta when he gets home and get the salad out of the refrigerator. I am still able to pick enough of the lettuce I planted in pots as well as arugula and basil (three types!) to make the tastiest salad on earth although we are (sob! weep!) just about out of tomatoes with no more to come unless I get my ass to a nursery to buy more plants.
Did you see that Florida has broken the record for most covid cases reported in the US in one day today? Even more than New York ever did! Of course, we're testing more than we were a few months ago but still- SO MUCH WINNING! Let's go to Disney World! Because they're open! Which makes so much sense!
So. Are more tomatoes worth the risk of covid? Well, there's one nursery where even the cash registers are outside so perhaps I'll chance that.

I can see Dottie and her tiny fluff of a child from where I'm sitting on the porch. They need to get back into the coop so I can go catch the peep and put her in the baby coop. Last night when I did that I almost ran straight into the biggest mama banana spider I've ever seen in my life. I literally bounced off her web. The golden orb weavers (their real name) this year are healthy and hungry.
And beautiful in their own spidery, wise, and clever ways.