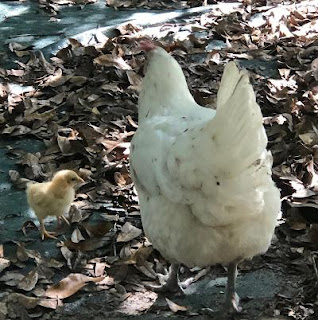 Well, day two of Dearie being free to roam with Dottie and as we speak they are both safely shut up in their little pen after spending all day roving the yard. I was shocked to see them all the way out into the side yard by the garden when I was picking beans but there they were, the little one almost hidden by the grass. It's such a lovely, cheerful sight to see them but I'm going to be crying if she gets snatched and it will all be my fault. I know it. All the rest of the chickens appear to be doing fine. I'll be glad when the younger gals start laying because egg production is way down to only one or two a day. I feel like Violet has to be laying somewhere but I have no idea where that would be. But this heat is hard on the hens and they do slow down production in the summer.

Today was a good day. I stayed up a little later than I should have last night. I sort of had a private party last night. While I made my supper I listened to Keith Richard's album Crosseyed Heart and sang and danced as I chopped and cooked. No one here to hear my croakings, no one to watch my old-lady shufflings. Just me and Keith. And while I ate I watched (for probably the fifth time) the Netflix documentary, Under The Influence and the sweet old man made me happy in the heart. I may not talk about him much but I still love him. As I wrote a friend of mine, sometimes these days the only thing in the world that makes sense to me is Keith Richards.
I doubt that will make any sense to anyone but it is true for me. As Keith has said, "You've got the sun, you've got the moon, you've got the Rolling Stones."
Fuck Covid. Fuck Trump.
Give me music and give me the spirit of Keith Richards. My spirit totem animal.

Anyway, I ended up not turning the light off until a little after midnight which is way late for me but I woke up at my regular time and got up and managed to get the beans picked, both of the green variety and the field pea variety. And oh, it was hot! I realized as I was in the garden that Maurice no longer joins me there these days. She's not stupid, that cat. She'll come keep me company when it cools down, I think. She still loves me. She's within touching distance of me right now, stretched out with the fan on her, snoozing as the crickets lullaby her. 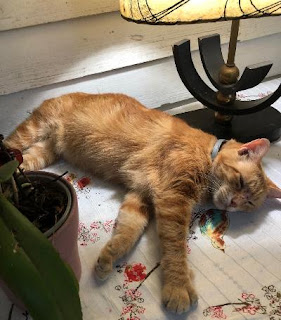 Jack was under my feet but he's disappeared. Probably back to the bed where he's been napping almost all day on Mr. Moon's side of the bed as if to demonstrate his enjoyment at being the only male in the house.

So I picked beans and I did a tiny bit of weeding and then a small amount of mulching and turned the sprinklers on. Despite the heat I do love being in the garden for at least short amounts of time, especially this year after Mr. Moon has made it so beautiful, so fruitful, so bountiful, and on top of that has provided so many bags of leaf mulch to keep it that way.

I finished August's dress to the point where it is now ready to decorate with those mythical sequins and rick-rack. There is rick-rack on the pockets and I've been going through the button tin to try and get inspiration for trimming.

Lily sent pictures of the kids on a walk/bike ride they took around a little pond by the east side library. I think they were brave to go out for recreation in this heat. She said that the kids were fine but Pepper- maybe not. 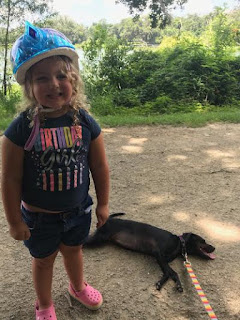 But no, Pepper is fine. Owen carried her the last little bit. 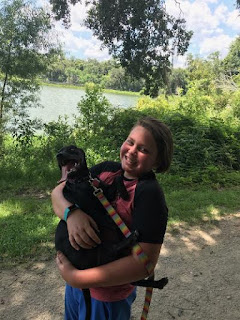 What a sweet boy my Owen is.

Jessie sent a picture of her family eating popcorn in bed. She'd been taking a nap and the boys woke her up but since they brought her popcorn, it was okay. 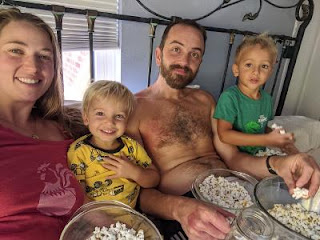 Do you think Levon has his mama's smile?

A sweet, simple day. For me.

Mr. Moon called and he has not had a sweet simple day. He is exhausted and probably heat exhausted and on top of that- no fish. No one was catching today.
Dammit. I wanted some fish. And I wanted him to catch them.
Fishing offshore is not just like going on a boat ride or throwing a line out into a lake under the shade of a willow tree. It's hard work. And it's hot. And there's no shade. And they can't just jump into the water to cool off. Added to all of that, he didn't sleep well last night as it took forever for the house to cool down. That little place sits in the sun and bakes and if the AC hasn't been on in awhile, it's that much worse. He told me he'd left the thermostat at 74 today and when he got in from fishing it was still only 79.
I was so hoping that he'd have a wonderful time but that's not what's happened. He's not even going to go out tomorrow. He's just too tired. I hope he gets some sleep tonight.

I feel pretty sure that I will. Get sleep tonight. I generally do.

Peace to all of you.