A Day At The River With Grandchildren Is Better Than Anything 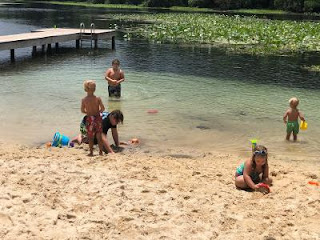 And well, there went my things-to-get-accomplished goals for today.
What the hell? I'll do things tomorrow. Boy oh boy! Did Little Orphan Annie get it right when she sang that song about tomorrow!
I've gotten so bad about this. There are at least a hundred little tiny things that I need to do that because of the pandemic and isolating that I put off doing because I can do them tomorrow! Hell yes! There have been three jigsaw puzzles that August did on the floor in the library for at least a month because
1. I sort of like thinking about him every time I see them and,
2. Tomorrow!

But today we went to the river. We did not put that off until tomorrow even though the weather was quite sketchy. But Lily and Lauren had the day off and Jessie wanted to get the boys out of the house and so we all met down at the beautiful Wacissa. There were a few mamas and babies and a dad or two but there was no crowding or craziness. And oh, what a joy it was to sit and talk and watch the babies play. Jessie knew one of the moms and one of the dads who, it turns out, is the son of a guy I went to nursing school with. I knew his mom, too. She was a teacher at the high school that both May and Jessie went to and they both loved her. So it was friendly and sweet. There were babies and little kids and even a kid about Owen's age that he made friends with. The kids miss other kids so much.
I cheated big time today and hugged and kissed all of them from the back. It was heaven. And when we were leaving, Owen reached over and gave me a side hug and I sure did hug him back.

The water was clear today and cold as always. 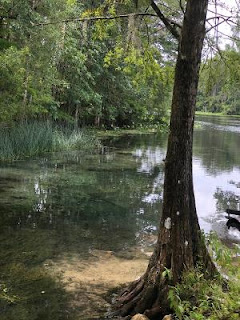 That's the boat ramp part of the little park.

The weather changed by the minute. From the sunniness you see in the top picture to this 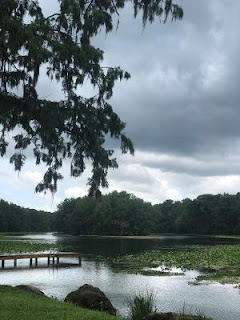 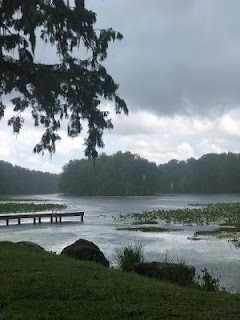 The children didn't mind- they were already as wet as they could be and there was no thunder or lightening. We kept moving our chairs and bags from sun to shade and finally under the little shelter where the kids could come for snacks. 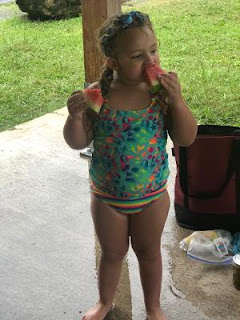 That little girl brought me a rock and a dead bug. She is not afraid of anything. Lily said that on the 4th she wasn't worried one bit about the sparklers throwing off sparks as Owen and Gibson had been. She just purely loved it. She brings her mama bugs all the time and says, "Will this sting me?"
They were at Wakulla Springs a few weeks ago and Maggie noticed a snake in the water and instead of freaking out she told a woman standing in the water, "Lady! There's a snake behind you!"
She may become a naturalist.
Or whatever she wants.

Levon is getting so twinkly and friendly. He was always so shy and quiet around other people but now he's comfortable talking to people. He's quite a good conversationalist! While we were in the water he circled me with his little boat in his hand over and over. He knows I love him. They all do. Still, it's incredibly hard not to kiss their faces, hold their hands, stroke their hair.
But I can make them laugh and kiss their backs and even bite their toes sometimes when the urge overtakes me.
Which it does at times.

It finally started thundering off in the distance and we all gathered our gear and the children and said our good-byes. It had been a wonderful few hours and I'm so glad we all went.

I had forgotten to take Levon's dress so Jessie stopped by on the way back and got it along with some field peas. Here's a picture I got from her later. 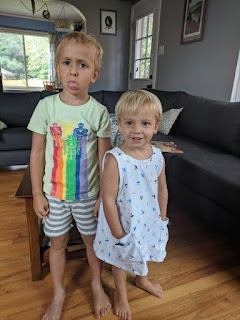 August is NOT HAPPY that I haven't made his dress yet. In fact, he recorded a message to me on Jessie's phone that asked me if I could please put some sequins on his dress, maybe like a rainbow, and also some of that wavy stuff down at the bottom so it won't look like Levon's. I think he meant rick-rack.
I will do my best.
And I better get to it.

I did manage to blanch and freeze some field peas after I got home. And pick some stuff for salad. And banana peppers. Glen had already picked cucumbers and a few tomatoes and more field peas and all I can say is- I'm going to need some more canning jars real soon. The bell peppers are coming on and I think I might stuff some of those tomorrow. Eggplants are making their beautiful fruits too.

Honestly, with all of this garden abundance and the regular small things I do around here to maintain some semblance of order, it is difficult to find the time to sew or clean up puzzles.
Although I do still seem to find time to do crosswords.
Throw in a day at the river here and there and my days are as full as can be. Or at least as full as I want them to be.

And of course there's always tomorrow.