Well, that's supposed to be a panoramic picture of a place in the woods I ducked into this morning to pee while I was on my walk. It was so quiet and beautiful. I guess you had to be there.
It's been a beautiful day all the way around, cool and utterly cloudless, birds singing and lizards sunning. Yesterday's rain, as insufficient as it was, has cleared the air of pollen for a moment at least and all the greens seem greener. The magnolia leaves appear to have been polished and are gleaming and glowing in the late afternoon sun.

My walk was a good one. I was out for over an hour soaking up the sun and cool air like a thirsty sponge and I could feel my calves being glad for the reminder of past strength. When I got home I made us our lunches of leftovers. Fish for him, soup for me. I have eaten that soup at least five days in a row and I think that despite the fact there is actually one more serving of it, I am done. For a soup that I had such poor prospects for, it has turned out to be pretty good and definitely nourishing but honestly- I've had enough.

I did a little crocosmia and Japanese paper plant pulling in the shade and appreciated the coolness with all of my heart. I worked at it in a leisurely manner until I didn't want to do it anymore and then I stopped. What a luxury! I've hung clothes on the line, I've folded and brought them in. I went through the cabinets and here's what I have discovered:
I definitely need more Miracle Whip and Duke's mayonnaise. I have no spares.
I have plenty of homemade pickles and I need to remember to start putting them out for our lunches. I hoard those things and they ain't gonna last forever. Dills, fourteen day pickles and mustard pickles. Also a large jar of applesauce that might need to be thrown away. It's been there for quite awhile but it was made with Vergil's mama's apples and I hate to do that. Again- saving something because it's special is really not the smartest thing to do, whether we're talking applesauce or the good china. If there was ever a time to enjoy the good stuff, this would be it.
I also have three cans of sweetened condensed milk. Really? Why? I only use it for making lime or lemon pies and I may make one or two of those a year. Have you ever put sweetened condensed milk in your coffee? It's just about the best thing in the world.
Beyond those things, I was not much surprised at what I found and what I did not find. Well, I did find that I have more canning jar lids and rings than I was aware of. I'll be happy as I can be if I get to use some of those this summer. Mr. Moon hasn't planted any cucumbers yet though. Maybe he'll tempt fate tomorrow and go to the feed store in Monticello and buy seeds. God knows that without cucumbers, there can be no dill pickles and no sweet pickles either.
His beans are coming up fine and so are the squash and the potatoes. The tomatoes are putting out a few blooms. The onions still look good and the collards don't show signs of bolting yet. I was talking to Lon about bolting greens the other day and we discussed the fact that both of us have had collards that lasted throughout the summer.
"I wonder what the factors were in making that happen?" I asked.
"Neglect, probably," he said.
Benign neglect is vastly underrated in my opinion.
We have discovered the problem with the sugar-snap peas. The chickens are nipping them as fast as they can. They love those vines and leaves and we plant them next to the fence to have support on which to grow so they just reach right through the fence with their long dinosaur necks and snip the tender growth with their sharp beaks.
Sigh.

Our governor finally and at last put out a stay-at-home order today. It'll start Friday morning at 12:01 a.m. It doesn't have much teeth to it though. People can go out to shop for groceries and necessities, they can pick up food from restaurants, they can go out to exercise and recreate although more than ten people can not congregate doing any of this.
Well, duh.

The people in Franklin County which is where Dog Island and Apalachicola are located are incensed because a Georgia congressman, Senator Bruce Thompson (Republican, of course) decided to recuperate from the coronavirus at his beach home on St. George Island because his doctor said it would be "good for his lungs"  after he spent time in the intensive care unit in a hospital in his home state.
In the You-Can't-Make-This-Shit-Up vein, his home on the island is in a gated community called The Plantation and he is from White, Georgia.
Also, he had written (on Twitter? Facebook?) “I ask everyone to join me in doing your part to #FlattenTheCurve and #StayHome as we fight the spread of COVID-19,”

The sheriff of Franklin County was not amused.
In a statement he said, “He says he’s cured,” said Smith. “He lives north of Atlanta. I don’t know why he didn’t stay there, It perplexes me.”
“I talked to him yesterday,” said A.J. Smith Wednesday morning. “I think he needs to go back to Georgia.”

In the latest update I've read, Senator Thompson is indeed going back to Georgia.

Quite frankly, if I had a home on St. George, I'd want to be there. Who wouldn't?

But I'm quite content to be where I am and given the circumstances, I am actually thrilled to be in Lloyd. As I keep saying, if people weren't getting sick and suffering and dying all over the world and I could hug my kids and grandkids, this would be one of the most beautiful times of my life. My husband expressed similar emotions today and we both agreed that although we feel guilty saying these things, it's true. We're finally being able to enjoy what we've worked so hard for all these years.

Well, check back with me in a month or two.

And of course, at the back of my mind the thought of the people on the front lines of this battle never leaves me. But for once in my life, I am doing all that I can do and I know that with certainty. 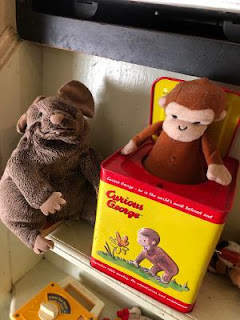 Ratty and George are so lonely.