My heart has just been so heavy today. And I know it's because it's Easter and I'm not seeing the kids and our friend Mark isn't here to eat greens and get hugs and give hugs and we didn't get to all eat at a very, very long table made up of a bunch of tables with mismatching tablecloths and mismatching china, and platters of ham and angel biscuits and "pass the butter" and "who ate the last deviled egg?" and so on and so forth.
I know that.
And when I think about it all, it's not that big a deal.
What a lot of mess I avoided, huh? Yeah. No mess at all to speak of.
And we're going to eat all the foods.
I made deviled eggs and I forgot to put mustard in them. How can we even call them deviled?
I made potato salad and got it too liquid-y and besides that, I was so spaced out that I salted the potato cooking water twice.
I have made up a tray of angel biscuits and they look okay in their raw form but we shall see when I bake them what in hell I didn't do or did do that I shouldn't have when I made them.
I've got a pot of collards and mustards and tomatoes and onions simmering. I don't think you can really wreck them too bad.
The ham is still in its shiny red wrapper.
So what's to mourn? We'll all be together next Easter, right?
(Pray so, pray so, pray so. To whom, I do not know.)
Hell, I don't even believe in Jesus or the resurrection or any of that. I don't believe that any god would send one "son" down to earth to save humanity from the sins that he made them commit in the first place by tempting them from the very get-go. Too fucking bad for all the humans who were born and died before baby Jesus came along, grew up, preached, and got himself hung on a cross. Ugh.
It makes no sense.
So, Easter. Who cares?
Ah, fuck it.
I guess I do.
Care, that is.

Easter is so much more than that sad and bloody story. It's so much older and more sacred. It's new life in all regards. I mean, bottom line- isn't that it? When sap runs and leaves and blossoms bust out and what had looked dead comes to life again? New babies are born whether of cardinals or cats or whales or women. The seeds that we planted with such hope when the ground warmed have sprouted and swelled with green promise?
And can there be anything more joyful than all of that? And so to share it with people you love?

I made some more masks for Lily and Rachel and Hank. None of them may fit and they all look like bra cups but maybe they'll do. I hope so. The material I made Lily's and Hank's out of is what remains of fabric from a dress I made for Lily about one million years ago. I think. 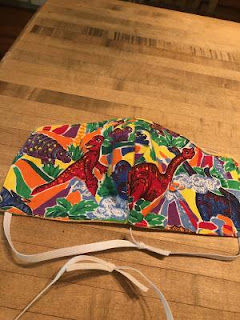 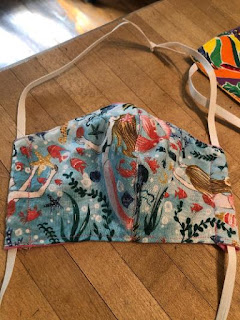 And from a dress of Maggie's. Mermaids.

Mr. Moon, in an entirely appropriate and very productive way spent hours and hours shoveling dirt and horseshit and filling pots with a gorgeous mix of it all for me to plant peppers and eggplant in. "I'm shifting to pot gardening," he said and I laughed at the double meaning. So far, no pot has been planted either in vessels or ground.

I got pictures of my grandchildren doing the requisite egg hunts. 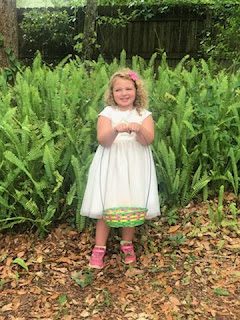 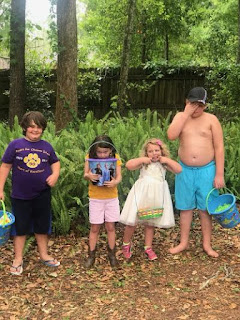 The Hartmanns, including the Darling Lenore.  Owen can hardly contain his excitement. Calm down, boy! Calm down! 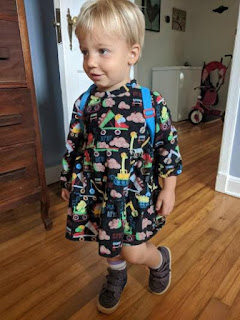 A boy in a dress. He's man enough to carry it off, though, don't you think?
It makes me so happy that he likes to wear the dresses I made for August. 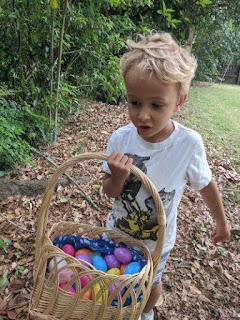 I wonder what's in those eggs? 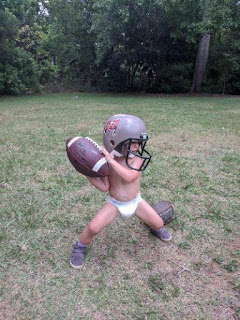 See what I mean about the manliness? Nothing says real boy quite like a diaper and a football helmet. 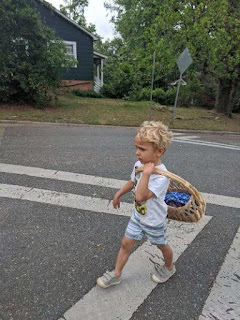 And a man on a mission. Obviously.

The little chicks survived their first night outside. I imagine they'll do the same tonight. It's been gray and muggy and warm all day. I've kept the doors closed to keep the cool air from last night in. We may get rain tonight. We shall see, won't we? The wind keeps kicking up, rattling the magnolia leaves and causing the wind chimes to tinkle and sing. I hear traffic on the highway and I wonder where in hell are people going? And why?
Sometimes I think that humans are just too stupid to live.

Thank all of you so much for trusting me with your potato salad recipes. I love how they varied, how they resembled each other, how each of us loves our own potato salad because it's the one we've eaten since childhood, usually. It tastes like a summer picnic, like a family Easter lunch, like mama, like brothers and sisters, like home.

I'd show you a picture of mine but it's just so pathetic. Even looking at a picture of it, you could tell that the person who made it was carrying a heavy heart as she chopped onions and pickles and celery, mixed in vinegar and olive oil, Miracle whip and mayonnaise, hard boiled egg and celery seed. And mustard.
No salt needed.

I better go do something with some ham and bake the angel biscuits.
It's Easter, after all.