In Which I Leap Out Of My Foxhole 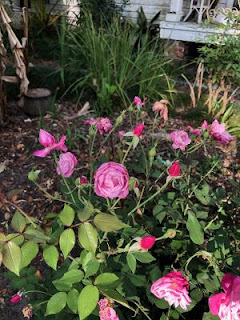 So.
Phew.
Damn.
Knowing that the virus is only going to become more widespread as each day progresses (and there's now at least one confirmed case in my county) I decided to take on that damn grocery list. I swear to you that we still carry the genes of people who knew that for the sake of their families' survival, food had to be procured, preserved, and put away for times when sources were scarce. Game traveled on to other grazing places, wild fruits and berries had their moments and were abundant and then disappeared. There were the best times to get fish and the best times to gather the herbs and green things and one must take advantage of these yearly events and then salt or dry the gatherings, the catches, the kills so that there would be something to eat when bellies touched backbones during the long, dark days of winter.
We still do have those genes.
I think they are pretty close to the surface in me.
And so this morning I re-wrote my grocery list to try and put things in order as to where they are located in the store and I got dressed in long pants and a long shirt with long sleeves so that I could strip them off when I got home and put them directly into the washing machine and I tucked my debit card in a back pocket and grabbed my Purell, my alcohol spray, and the mask that Jessie gave us. Mr. Moon had washed the mask carefully after using it himself and whether or not that was a good idea, I do not know but I do know that wearing it while still damp did not work.
So the first thing that happened when I got into the store was that I found I could not breathe.
I could not breathe.
Now. Whether this was due to the mask being damp or to me being super anxious, I do not know but when I realized that I was touching my face over and over again to try and adjust the thing so that I could breathe, I took it off.
And then I saw Lily who was doing shopping for Shipt which is a side-hustle she does occasionally and was doing today. And I cried. I just can't bear seeing my babies without being able to touch them, hold them. It's too fucking hard. THIS is my hard thing.
So within the first three minutes of being in the store I'd not been able to breathe, taken my mask off, and was crying.
Ooh boy. This is what happens when someone who is basically agoraphobic has not left her little tiny corner of the world in twelve days and goes out into the market place.
BUT, I carried on.
The store wasn't that crowded, especially at first. Few people were wearing masks of any sort. Some were though. Some were wearing gloves. No one seemed to want to look at anyone else. Announcements were being made regularly to remind people to keep six feet apart for safety. This was not always obeyed but mostly, folks did seem to try and abide by that. I entirely skipped a few aisles on my first go-through because there were others in the aisle. The only thing that I wish I'd gotten and did not was another bag of bread flour and I skipped that because there were two ladies who were standing right there and didn't seem to want to move and I just semi-freaked and went on by.
Not breathing of course.
The shelves were fairly full. Many were completely full. I even managed to get some toilet paper. The good kind. Mega rolls. There were notices on the shelf that we were limited to one package per shopper.
Good.
I got everything I think I need although, like I said, I do regret not getting the flour.
I didn't do any impulse shopping except for one thing- I got a can of corned beef. Home made corned beef hash is something that is truly a deeply loved comfort food of mine that I have not eaten in probably twenty or so years. So.
Oh! And I got hotdogs. Don't even ask me why.
I did not get buns. I am making buns. We are going to have some damn hot dogs and baked beans and sweet potato fries for supper tonight. With a salad. And that is okay.
I checked out and had another small breakdown at the cash register. I fucking apologized to the lady who was checking me out as well as the bagger.
"For what?" the checker asked me.
"Oh for everything," I said. "I'm buying so much."
"Honey, we appreciate it," she said. "Don't apologize."
More tears.
Those people are the damn heroes. Lily and Lauren and Jason and all of the people making barely above minimum wage keeping the shelves stocked and pretty and neat and tidy and helping us to find things and doing all of this for the most part without masks or gloves. Yes, our medical people are heroes too but they are, hopefully, being given protective equipment and clothing. And when you go to school to become a professional in the health care profession you accept that part of your job is going to be exposed to people with contagious diseases.
Not to this degree, certainly, but still.
Whereas when a sixteen year old fills out a form at Publix to get a job, passes the piss test and becomes an employee, I doubt it ever crosses her mind that one day she may be exposing herself daily to global pandemic.
I am humbled to my knees by them.

I loaded my car up, I used alcohol and Purell before I touched anything inside it.
I drove home, first listening to NPR, then saying, "Fuck this," and changed the station to one blasting Aretha and I turned it up and that was the best thing about my whole day.

Came home, unloaded the car little-by-little and wiped off everything with bleach cleaner before I put it away. I doubt this is helpful in the least. I KNOW what sterile procedure is and bringing groceries into a house and trying to recreate what they do in an operating room is impossible. That's all there is to it.
But you do what you can do, right?
So this took over an hour and when it was finally all done and I'd eaten some lunch and taken a shower and changed clothes again, I collapsed.
I was done and done and done and as wrung out as a pasta noodle left in a boiling pot of water for way too long.
I had to lie down and I did and I fell asleep and when I woke up Mr. Moon kept apologizing for making noises that no doubt woke me up.
I did not hear a thing.

I know that I am completely overly dramatic. I mean- I went to the grocery store. I did not cross enemy lines to save a fellow soldier. I did not do a twelve-hour shift in the contagion ICU ward. I did not do a shift at Publix. I did not go hunt the wooly mammoth.
But this is how I reacted. And this is how it felt for me to shop for groceries on April 6, 2020.

Sure didn't see this coming.

I feel better now. I've slept, I've had coffee. I've gone about my routine.
And I ain't leaving Lloyd for at least a month if I can help it.
I do believe I have enough groceries to make that happen.

Here's what I'm going to turn into our salad tonight. 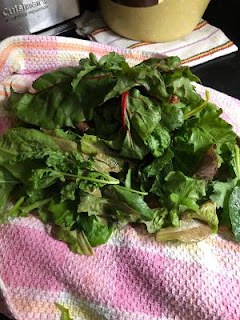 Man, it's gonna suck when all these greens are gone. I'm going to plant another row of arugula tomorrow to see if I can keep some of that, at least.

Tell me what you did today and tell me how it felt.
Love...Ms. Moon