Keep On, Y'all. Keep On With It 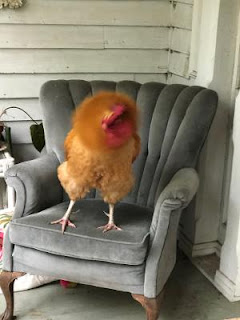 This is what Liberace's feathers look like when he does a head-shake. Isn't that amazing?

It has been a very good day for me. I felt like I got a lot of things done that needed doing. Just little things but important things in my tiny universe.
First of all, the baby chicks went out into the baby coop. 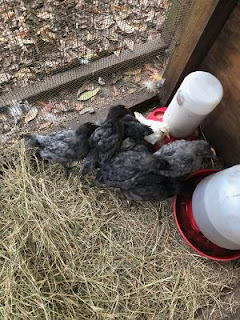 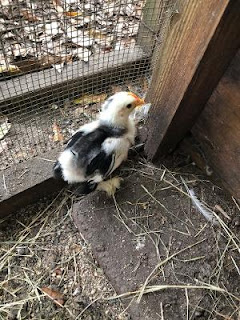 This little one, one of the banties, is just the cutest thing ever. Look at her tiny feathery boots. Can you imagine what it must be like to go from a lifetime of living in a red Rubbermaid bin to finding oneself in a wire coop that lets in daylight and fresh air and sounds and smells? And yes, chickens can smell. Here's an article.
It is probably pretty scary in the new world for them but they adapt. One end of the little coop is enclosed and I put hay in there so they can feel like they have a place to hide but I put the food and water where they have to go to the other end to eat and drink. They do almost everything as a group- a flock, if you will- and that helps with courage, I'm sure.

So I cleaned out their bin for the last time and it's such a nice thing to walk through the laundry room and not be assaulted with the odor of preteen chicks although their chirping has been so very friendly.

Inspired by Lon I made up some hummingbird nectar and put the feeder up. He says he's getting SO many this year. 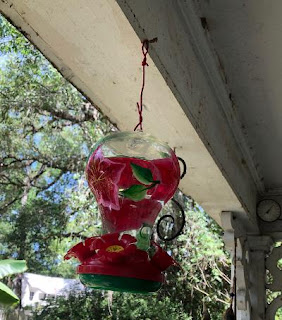 Now all we have to do is wait.

I kicked bamboo. Good Lord, but it never ends! Well, it will for this season but in the cosmic sense it will continue forever. Or at least until our environment here no longer supports its growth. Since it's only going to get warmer, this might take awhile. Here's one that got away from me. 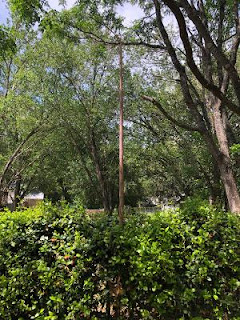 The sneaky damn thing grew up right by the fence, hidden by the confederate jasmine for awhile. Once it hit the sunlight it leapt upwards at an alarming rate.
As it does.

Here's Jack, watching me in the yard doing what he obviously thinks is completely ridiculous. 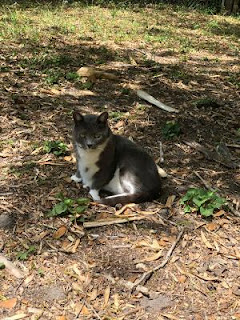 That boy is getting thik, as the kids say these days. Or is it thic? Whatever, my man Jack is fat. Dense. Sturdy. A comfort to sleep with.

While I was kicking bamboo I solved the puzzle of the glass cloche when I found the wire hanging thing it obviously goes in. And you know what? I have a vague memory of this from years ago. I picked a few spider plant babies and stuck them in the glass part with water in it. Looks like this now. 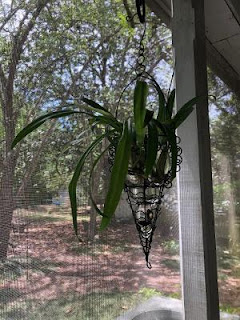 And while I was on the front porch collecting the baby spider plants (one thing does lead to another, doesn't it?) I discovered where some of the hens have been laying since the snake spooked them in the hen house. 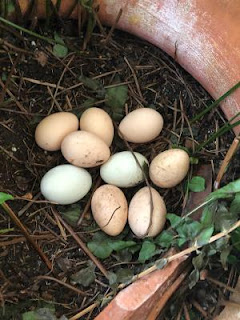 I knew they couldn't be over a week old because I watered the porch plants last Saturday so I brought them in and cleaned off the ones that needed cleaning and I feel as if the Easter bunny has paid me a visit. I boiled a few of my older eggs to make deviled eggs tomorrow for Happy Zombie Jesus Day and Mr. Moon, who went to town, stopped at Costco and bought me this. 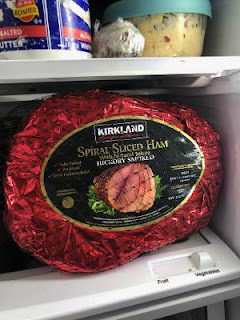 Oh, y'all. I love ham so much. I am not proud of my love of ham but it's a fact of my life. I plan on eating some tomorrow and then packaging up and freezing meal-sized portions which will provide ham for a year.
You know what I'm looking forward to most?
Pinto beans with ham. My favorite meal by far.

I did not wait until three to start sewing today. Nope, I didn't.
It was 2:47 I think.
First I made some ties to replace the elastic on one of the masks I made yesterday which worked well and then I tried out a new pattern that a reader sent me. I had been looking at this pattern for a few days and first off, it's got an actual pattern to it that you are supposed to print and I don't have a printer and besides that, the video on how to sew it was over twenty minutes long and the instructions were quite lengthy as well. But I really liked the way it seemed to fit and so I finally just said, "fuck it" and free-handed a pattern to scale from the one online just by looking at it and I read through the instructions and looked at the many, many pictures and decided that I could just do this.
And I did.
It worked great. 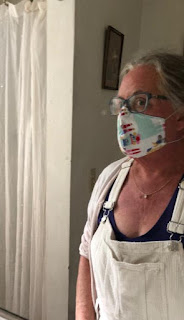 Do I wear the same thing every day? No. No I do not. I have two pairs of those overalls, thank you very much. 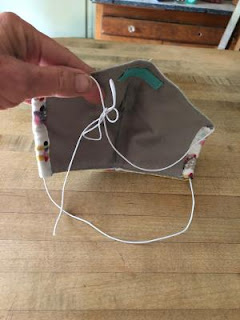 I even put a nose wire in it made from a piece of one of those little bendy things that come on bags of coffee which May discovered works perfectly. Which is freaking genius. I have a few refinements I want to make in the next ones but I think this is the pattern for me. Thanks, Allison!
So now I don't feel quite as lame.
I am SO grateful that I grew up in a time when there was a Home Ec class. I wish everybody, men AND women could take one of those. I mean- who knew that sewing was going to be such a practical skill in 2020? And cooking. Of course.

I've barely looked at the news all day long.
Okay. I just did a cursory glance at Huffpost if you can call that the news.
Yeah. Things don't look so good.

Deep breath.
Keep breathing. Keep going. Keep remembering that all things must pass.
And although I make fun of Easter there isn't a damn thing wrong with celebrating new life, birth, sex, love, and even the idea that death is just a passing through a curtain into infinity.
Or something like that.
Whatever.
You know.

P.S. How do YOU make potato salad? I'd really like to know.