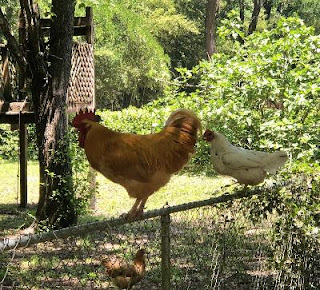 Today has been absolutely gorgeous. Not humid and relatively cool. Perfect. I haven't even broken a sweat all day although I will admit that this is mostly because I haven't done anything that might cause me to break a sweat all day.
Nothing.
Mostly what I did was to sit here on my back porch and bask in the sweet coolness and look out at the blue sky and green world. I did a crossword and listened to the birds and watched my chickens do things that were far more industrious than what I was doing.

This morning I let the baby chicks (let's call them pre-teens now) out of their little coop or should I say I opened up the little coop and scooped them out and put them on the ground in the big coop and one flew back into the little coop immediately but soon they had found some food I'd put out for them and the next thing I knew they were basking in the sunlight and scratching and doing the things chickens do. 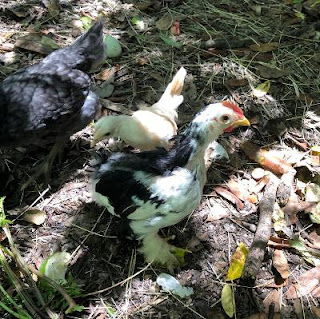 Here's the fanciest chicken in the yard. Little Feather Feet. Or as Mr. Moon has named him- Precious. I feel almost certain that Precious is a rooster. He's one of the banties. See that comb? 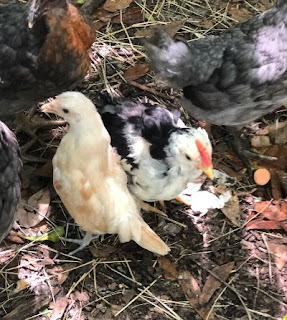 His sister (I guess- who knows?) is the yellow one right beside him. I am calling her Tweety. Like Tweety Bird. She does resemble a canary at this point.

Moving back to cats again- I caved this morning and fed Jack in Maurice's bowl. I faced the facts which are
1. Who cares where Jack eats his Friskees?
and
2. How stupid is it to try and argue with a cat?

And that's about been my day. When I got up this morning I pulled a dress out of my closet that I haven't worn in about ten years. It's an old hippie dress, the softest rayon imaginable and I am not sure how long I've had it but I know that twenty-five years ago I already thought of it as old. So that's been a part of my contentment and ease. I walked around the garden for a few moments with Mr. Moon, checking out the baby squashes and tomatoes and marking the progress of the beans climbing the trellis. I repotted a few eggplants and cheered on my basil. I've thought a lot about how rich life can be when it gets peeled down to its barest essences and we are not distracted by the static and constant hum of everyday life.

And yes, I do know how lucky I am. Unimaginably lucky. That lucky and more.