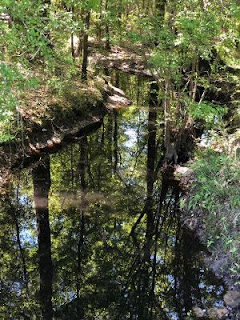 That is Black Creek, a little meandering thing that we cross over almost every time we drive to town, but never truly see. Isn't it beautiful? I walked there today, almost two miles exactly to the bridge, two miles back. Not so far but far enough for me.

It's been another almost perfect day, weather-wise. I doubt there's been one cloud in the sky and the air is dry enough and the temperature is cool enough that I made the house as accessible to the outdoors as possible, doors open, the boundaries between inside and porches and outside blurred. This is how I love it.
Soon it will be so hot that the outdoors will require shielding ourselves from with closed doors and windows. Mothers will scream at their children, "You're letting the cold air out!" every time they open a door. Frustrated cat owners will say to their pets, "In or out? In or out? GODDAMMIT, Decide NOW!" while the cats stand by an open door, taking their own sweet time to decide whether they want to go snooze  in the shade under a tree or sit on a pillow on a chair over an air vent in the house.
But for right now it is perfect.

So today at 2 o'clock in the afternoon I had not even made my lunch. What in hell had I been doing all day? Hmmm...
I made breakfast. I actually cooked things. Mr. Moon wanted some eggs and bacon but he didn't want any vegetables in his eggs. He wanted to TASTE the eggs. So I did that.
And I went on a walk.
And I washed the clothes and hung them out.
And I gave the teenager chickens greens and fresh food.
I picked a few carrots and some arugula to make my lunch. Which, as I say, I got around to doing after two. I made a quinoa and tuna and vegetable salad, chopping up celery and carrots and onions and cucumbers and tomatoes and the arugula. I cooked the quinoa and cooled it, mixed all that up with some tuna and olive oil, lemon juice and vinegar and salt and pepper and garlic, a little stone-ground mustard, a bit of Tamari.
It was...okay.
All healthy and shit, you know.
I ate that and then I cleaned up the kitchen and made the bed and fixed up a clean bin for the baby chicks and cut up grapes and greens for them, gave them fresh water and chick feed. I took the teen chicks some grapes as well, along with a strange veggie patty I made awhile back. They attacked all of it.

I kicked bamboo.
I did some crossword puzzles.
And that is all I have done today.

Mr. Moon went on a good bike ride and saw a tom turkey. He visited (from a distance) a friend of ours who lives out in the woods nearby. He braved the Monticello feed store for cucumber seeds. I just looked up the number of cases (so far) in Jefferson County where Monticello is and they have zero. So far.
Perhaps I should be doing my shopping at the Winn Dixie.

I'm keeping a running list of things that we are going to need. We do not need anything in an emergency way at all. Not one darn thing. But the list keeps getting longer and longer and I'm wondering if it's smarter to just wait and go next week or if it's safer to go, oh, say tomorrow, because every day that passes means more infected and contagious people walking around. I know that Lily is quite willing to bring me things from when she's working but I cannot ask her to tote an entire cart's worth of things like frozen vegetables and canned tomatoes. I could, and she would, but I won't.
I think I'll just wait until next week. We have pasta, potatoes, rice, proteins from beans to venison, plenty of eggs, flour, sugar, coffee, yogurt, and yes, even toilet paper. Grits and greens. We got 'em. Cornmeal and a can of sardines.
Yeah. I do believe I've talked myself out of going to town any time soon.

I talked to Jessie a little while ago. She wanted to know how I made a certain salad dressing and I told her. Then she said, "Well, I better go and get this supper on the table. These boys should have been in bed hours ago."
It was six o'clock. I laughed.
"They should have been in bed right after Levon woke up from his nap!" she said. 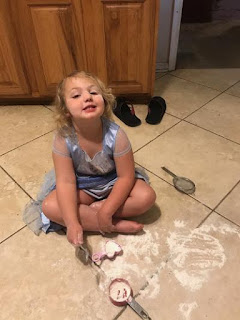 The accompanying text said, "Trying to do things takes so much longer when there are kids underfoot everywhere!"
She was trying to make soup and bread to take to a friend who just had a baby.
I guess Magnolia was helping.

I found this in the yard while I was kicking bamboo. 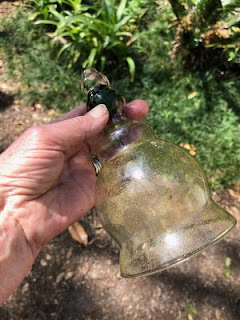 I sent the picture out to the kids and Hank suggests that it may be a cloche. A fancy glass thing to set over little curiosity displays or to make a tiny terrarium under. I think he may be right but I'm putting it out here to see if anyone knows for sure. The glass is very thin and I am surprised that it's undamaged. I dug the algae gunk out of the decorative end (top?) and am going to give it a good washing.

I haven't really read any news all day. What's the point? The joy of staying at home is that no matter what's happening "out there" I am safe here. To know more is to become absolutely terrified.
That's my theory although I have had hives all day so I suppose that some part of me is at least, uh, disturbed.

Time to go make supper. I'm making a sheet pan chicken with potatoes, arugula and garlic yogurt sauce. What have you been doing in the kitchen? Where are you on the emotion-meter? Redlining? Down there in the green somewhere? Or is your needle flashing back and forth so fast you can't keep up with it?

We're going to make it through this. Just keep thinking about the world's most brilliant scientists who are working on it.
As dear John Gray says, "Tits up!"
Speaking of which, when was the last time you put on a bra? If there is ONE positive thing about this whole situation it's that bras are not even anything I have to think about from one end of the week to another.

Just let the bosoms fall where they may.