I've taken no pictures today. None. None at all. I didn't have the energy or the heart or the desire. First thing this morning I came across this picture in my memories on Facebook. 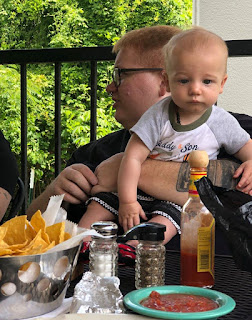 Hank and Levon at El Patron two years ago.

And then this one from Lily. 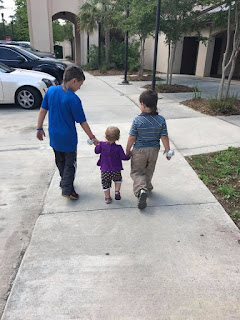 And then I cried off and on all day.
I'm still crying. It's ridiculous but I suppose it has been a much-needed small breakdown in the midst of all of this. Yesterday was such an intensely good day and there is always yin to the yang, down to the up, dark to the light.

I forced myself outside to do some weeding in the camellia bed and I hated every second of it even though I was listening to another Alexander McCall Smith book in his series about Scotland Street. The Peppermint Tea Chronicles.
No one can be as sweetly philosophical in his characters' musings, no one can create such gentle and humorous and heart-touching people to speak and act upon the stage he sets for them and sometimes he gives us someone to absolutely abhor along with it all to give (once again) balance. Reading these books is a break in the horror that life can be. There was a moment in this book when I almost worried that a character might possibly be a pedophile but no, no, of course not! It was only a circus clown trying to get rid of an extra unwanted puppy by foisting it off on two small boys, one of them Bertie, quite possibly one of my favorite characters in all of literature.
But even with all of that I was miserable. Hot and sweaty and itchy, irrationally hating the invasive plants I was pulling, wondering where all of my ferns that I so carefully transplanted from the woods have gone. So then I set myself the even more unpleasant task of trimming a sago in that bed which caused me to itch and hive even more. Finally I said enough and came in and laid down on the bed and read for awhile and then slept.
It rained one short, fast, hard coming-down of it and then stopped and now it is cooler and a little less muggy and the frogs are pleading with their raingods who have croaky, trilling names whom they call upon over and over in supplication.

Well.
Last night it was a true and real joy for me to see those Rolling Stones play "You Can't Always Get What You Want" from their own houses. I know I am prejudiced but it was, by far, the best performance. When I saw the screen come up with four different rectangles on it labeled, "Mick Cam", "Keith Cam", "Ronny Cam", "Charlie Cam" I squealed like a fourteen year old girl and it was elegant simplicity from those four beautiful old men with the faces they have earned and burned into themselves with every moment of their lives. 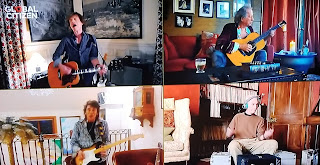 I was in heaven for five minutes.
It is hard for anyone who did not grow up with the Stones as the soundtrack of their young lives to understand what it means to see them now, still alive, still playing. And here's something- That song is the one that Trump for some completely unknown reason has played many, many times at his rallies despite the Stones telling him not to. So there was that. And of course the message that you can't always get what you want but that if you try sometimes, you get what you need is timely as we all want to move back into the world at least a bit more, to hold the ones we love, to earn our livings, to feel as if we can move freely while knowing that this is NOT what we need to do which is to listen to the scientists, the doctors, the people who actually know what they're talking about.

I want to add one more thing here- Charlie Watts is the coolest man on the planet. I think that even Keith would agree with me here. He played air drums on this song. I think it may have been because syncing drums with the rest of it over such space and time might have been too difficult. But what do I know? I just know that he was there with his drumsticks, keeping his own time which is the Stones Time as he has been doing for over fifty years now, being the mattress, as Keith says, upon which they lay.

All right. Let's see how tomorrow goes. I remember so very long ago when I first started writing this blog and I posted on a Sunday about how much I hate Sundays and how if I had a church it would be the Church of the Batshit Crazy and that our sermons would speak of and celebrate miracles like Keith Richards still being alive and this was before I read his book, Life, and fell in love with him and all those bandmates of his.
This is a Sunday where I have truly been batshit crazy but the Rolling Stones have once again given me the hymns I need to get through it.

Tomorrow will be better.