The Good, The Bad, And The Really, Really Strange

So. I went to town this morning and I wore one of my own masks for the first time and it definitely needs some adjustment but at least I could breathe in it and at least I could wear it which was a good thing. I was not nearly as paranoid as the last time I shopped and I wonder if that's because it all seems so normal now to think of the virus being everywhere or whether it's because six weeks or whatever it's been of living in a peaceful and relatively stress-free environment, has calmed down my panic response to a reasonable level.
Who knows?
Not me.
People at Publix still don't seem to have a clue as to what six-feet means. Also, they have arrows and signs at the beginning of each aisle to tell you which way to traverse it but a lot of people either didn't notice that or else decided to ignore it. I think that most of them just didn't realize that the aisles are now one-way although they do make announcements frequently.

I got all of my shopping done in a fairly efficient manner. I have learned to take the list that I keep over the course of weeks and use it to make another one which is grouped into a more rational way. That helps. I know the aisles at Publix pretty well so I know which one has the olives and worcestershire sauce and which one has the raisins. Etc. All of the employees are masked now and a lot of shoppers were too. And I was glad of that.
Here's a picture of my own Publix girl wearing a mask I made her but obviously not while she was at work. 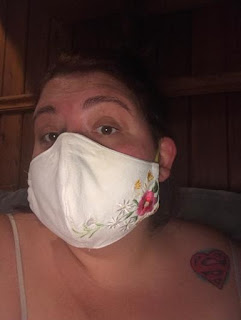 After Publix I went and picked up my compounded hormones and that was fast and easy. Then as a favor to my husband and to save him a trip to town, I went to a licensing office and traded a check for his dealer's license. That, too, was fast and easy. The woman must have seen me coming because she met me outside with the envelope and I handed over the check.

And then on to Costco where those folks are truly trying their best to keep things safe. I won't say that all of the shoppers had any more idea what six feet is than the ones at Publix but everyone seemed fairly aware, at least, and there was a lot of cleaning going on. When it was time to check out, I only had a few items and an employee scanned my card, then my items, and directed me to a register where my card was scanned again, I paid and got a receipt. Done. I went into the liquor store where I got to see my Costco friend Kevin and we got to have a little chat, catching up with each other. That was mighty nice. I did not get to see Brenda with the beautiful eyeshadow (and perhaps we should all be wearing eyeshadow with our masks these days- wouldn't that be nice or at least interesting?) but I did lay eyes on the beautiful lady who loves August so much.

And then I drove home, stopping off at Lily's to drop off her masks and I didn't even try to wipe down my groceries but just put them all away and washed my hands really well and changed clothes and that was that. I had bought one of  Costco's street taco kits which comes with corn tortillas and cabbage and meat and cheese and salsa and avocado crema for our lunch as a treat because we've eaten nothing but my cooking for weeks now. Which ain't bad but something different can be good.

We've just gotten a tornado warning here. It's been raining in sheets although now it's only drizzling. The temperature has dropped ten degrees since this afternoon. My neighbor always calls me to make sure we know about tornado warnings and I appreciate that. For right this second I don't feel much of a threat but I suppose that's the way it always is.

So. Ms. Moon- what's the deal with the Rolling Stones' "Living in a Ghost Town" gif up there?
Well. Funny you should ask. I was perusing Facebook earlier and of COURSE I am friends with Keith Richards (I'm sure he considers it an honor to be my friend) and there was a little video of him and a French bulldog on some steps in front of a beautiful doorway. He was wearing what appeared to be leopard print pajamas with a poncho over them (that man has always had a sense of style) and in the video he said that a year ago the Stones had recorded a song called "Living in a Ghost Town" for an album that they've been messing about with for quite awhile and then the shit hit the fan and he and Mick decided that this song really needed to go out.
Which one of y'all said the other day that there is something mystical about the Stones?
This song is unbelievably precognitive. I saw a short video of Mick talking about it too and he said that the original lyrics had all sorts of plague-type references which didn't make it into the final song but what did make it into the song is strange enough.
Here are the lyrics.

For some damn reason Youtube isn't letting me share any videos these days. I've tried and tried to figure out why and there are lots of other people who are having the same problem. When I click on "share," I only get a blank screen with an eternally whirling circle. So I can't embed the video but if you go HERE, you should be able to watch it.
If you want to. I'll still love you if you don't.

Well, suddenly the wind has picked up considerably and the rain has returned with Biblical force. And it's lightening and thundering. I imagine the power will go out any moment but hopefully I'll still be able to cook the bream that Mr. Moon caught yesterday evening in a pond on a friend's property. He brought home five little fishes and two ticks but that's life.

All right. That's certainly enough for one day.
May you all be well. May you all stay safe. May you all have plenty to eat and someone to hold on to whether that be man, woman, child, cat, or dog.