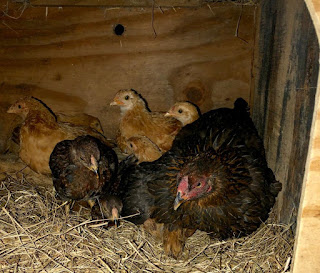 Mr. Moon got up at the horrendous hour of 3:00 a.m. and kissed me good-bye.
"I love you," I mumbled. And then I said it again, just for good luck.
And promptly turned over and went back to sleep.
When I got up five and a half hours later I found a love-note and my coffee made and freshly brewed.
I love that man.
He made it to Tennessee just fine and appears to be in very good spirits.

Lily is fine too. Whatever hit her yesterday was fast and furious. It came, it conquered, it left. I don't think it was gallstones as she had no pain in that area. Simply the intense nausea of food poisoning or a stomach virus. Anyway, it's over and she went back to work today, a little tired but otherwise feeling fine.

I took a walk in my new shoes and they're okay. Unfortunately they don't make me fly or spring into the air with each step which is a disappointment. I suppose I'll never get too old to have the secret hope that new shoes will make me into some sort of super hero.

I went over to Lily's in the early afternoon as she had to go to work and Jason had a little more time before he could get off work and take over. When I got there, Maggie was asleep and when I woke her up to get her dressed and into the car to go get her brothers at the bus stop, she was so sweet.
"Hey, darlin'," I said. "It's MerMer."
She hopped right up on the bed and reached around and hugged me tight and I buried my nose in her soft curls. She was happy to see me and let me dress her and we giggled and I pretend-bit her feet with their tomato-red socks on to see if they tasted like ketchup.
On the way to the bus stop, Jason called to tell me he was on his way home so when the boys got off the bus I had to give them the bad news that they weren't coming to my house again today.
They were so upset. Maggie was too, truthfully.
"I want to go to me Mer's house!" She breaks my heart.
Owen tried to convince me that we had to go to my house because he'd borrowed a toy from a girl at school and he'd left it at my house yesterday and he absolutely HAD to return it tomorrow.
"I had to beg her for a whole day to get her to let me borrow it!" he said.
"Yeah," I told him. "I found it when I cleaned up yesterday after y'all left but I forgot to bring it with me. I brought some tomatoes to your house, though. Maybe you could take her a tomato."
He looked at me as if I were insane. And then he said, "WHAT?! A tomato?! Is that what you used to pay for toys with when you were a kid? A TOMATO!!!" And so forth.
I laughed so hard.
I should have told him that toys hadn't been invented when I was a kid.
I delivered them to their father who'd already gotten home and after discussing how Owen HAD TO TAKE THE TOY BACK TOMORROW and with Gibson pleading that they had to get a Wii game from my house to bring back to their house, Jason said that he'd bring them over after Owen did his homework because he had to pick up the meat grinder too.
And he did and Maggie cried because she couldn't get out of the car and when Owen came into the house to get the toy and the disc he said, "You better go kiss the children because they are crying."
The children.
Gibson wasn't crying. He was just excited to get the Wii disc. I promised Maggie that she could come back and play soon and off they all went with their wonderful exhausted daddy.

And then I leisurely cleaned the hen house and put new straw in the nests. As you can see, Dearie is choosing these days to sleep with her children in a private nest. I know I keep posting pictures of them all together but they're just so dang cute and soon they will be bigger than their mama.

Mr. Moon and his buddy are going to an actual pro-football game tonight. I told him that although that sounds like my worst nightmare, I hope he has fun and that I imagine he will.
I myself am almost delirious at the thought of eating my little supper and watching Twenty Feet From Stardom which I cannot believe I've never seen. I am ridiculously excited about this.
As Owen implied in his tomato speech, I am old. But as I know, he was teasing me because he can and because he loves me and because this is how we are. I tease him about being young and he teases me about being old. And in some way, we both know that our hearts are the same age.
At least that's what I tell myself.
And it's going to make my heart happy to sit on my couch and be warm and cozy and pick up my knitting after I eat and watch these gorgeous (mostly) women talk about their lives and their work which absolutely gave life to the soundtrack of my life. The most joyful, ethereally transcendent, dancing moments of it anyway.

And there you have it.