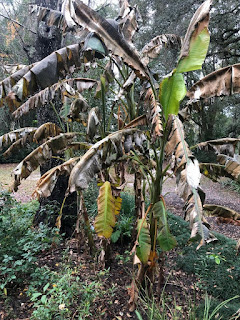 This is what the frost-killed bananas looked like this morning against the gray, gloomy sky. The bananas aren't really dead. I'll cut them back and they shall spring forth again in the spring. I've never gotten a banana from them but I do love the plants and the way they look and the way their leaves turn and sway in the wind.

The sky has looked like snow all day long although I am sure we aren't getting any. It just has that heavy gray look to it that I remember from Denver the two miserable winters I spent there. I was not meant to live where it gets so cold and mountains do not call to me. I don't mind admiring them from a distance but when it comes to climbing them, rock climbing on them, or skiing down them- well, no thank-you.
Y'all have fun with that.

I'm waiting for Mr. Moon to get home from Tennessee. He flew up but he's driving back which is a work-related story. I think he's had just the very best time. He told me last night that he and his friend have laughed and laughed. That alone would make a trip worthwhile, I think. I hope he isn't too sad to come back to Florida and his wife and home. Maggie asked me yesterday if Boppy was coming back to "me Mer's house."
I assured her that he was. She was glad to hear that.
I have some chicken soup simmering on the stove and a Meyer's lemon pie cooling in the refrigerator. I use the same recipe I use for a Key Lime pie but with the lemon juice instead of lime and it is delicious. I also have whipped cream in a bowl to go on top of it and that, I am sure, will make my husband happy. Jessie and Vergil have a lemon tree in their backyard and it is always overabundant which is a delicious problem to have.

Speaking of Jessie, I met her and the boys at Costco today. What in the world would we do if there were no Costco? We companionably pushed the cart together through the aisles, all of us feeling the incredibly soft fleece jackets which we did not buy, examining the crabs closely. Examining the crabs is something that August and I MUST do in Costco. With our fingertips we trace the sharp bumps of the animals under under their protective plastic and talk about what sort of crabs they are.
It never gets old. Don't ask me why. It's part of our ritual.

Jessie decided that having lunch out today was probably not the best idea. August was in a bit of a mood and when she went to put Levon in his car seat he wailed in rebellion. But I wasn't ready to come home and I had stopped at the post office on my way in and had a brand new Esquire magazine with Bruce Springsteen on the cover and so Bruce and I had lunch together at a local Mediterranean place. I was vastly disappointed in my falafel gyro and dolmades (how can dolmades be disappointing?) but there were very few people there and I did enjoy just sitting and reading, eating what I could of the meal and taking my time with all of it. The article didn't tell me anything I hadn't learned from his tome of a memoir that I read a few years ago. Mostly it's about how a parent can fuck you up good and then you can go on to still love them hugely.
I guess.
Poor Bruce. He's had his horrible struggles with depression and what he calls "agitated depression" but which sounds like terrible anxiety to me.
Well, god knows it hasn't prevented him from being who he is which is most definitely The Boss. On November 15, Netflix is going to start streaming a special of his Broadway show which will be ending on that day. On Broadway. And you know damn well I'll watch it.

Speaking of fathers, I dreamed of my own father last night. The biological one, that is. I'm not sure I've ever dreamed of him before. At least not since I've become an adult. In my dream he was telling me that he was going to be having another child and I got so mad at him. I told him that he'd done nothing whatsoever to help support or raise my brother and me and how dare he just go around fathering children that he was just going to abandon?
This makes me wonder if now I'm going to have to start unpacking my feelings about him which honestly, I've always felt like I'd already done.
It never really ends, does it?

And now Mr. Moon is home, jittered up with coffee and being on the road for ten hours. I hope he can get unstrung before bedtime. He does seem to be pretty happy though, so that's good. And it's good to have him home again.

Ringo and his jungle hens showed up this morning, fine and fit but they've chosen to spend the night outside again tonight. I wish they wouldn't do that but as I said yesterday, there's not a thing I can do about it.
I'm not even the boss of my chickens.
Or my dreams.

Let's all have sweet ones tonight, okay?