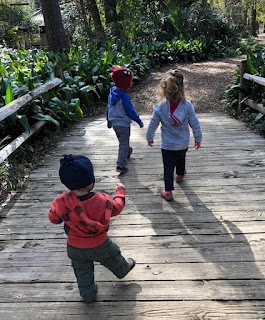 Oh my goodness! What a full day! And although Lily has not had a good one (more on that in a minute), I've had fun and there has been sweetness.
Jessie texted this morning asking if anyone wanted to go to the Jr. Museum and I decided that yes, I did want to go. Getting out and being with the kids and their mommies and seeing the animals and being in the beautiful outdoors sounded perfect. Lily offered to drive me if I came by her house on the way and so I did and we met Jessie and the boys.
Look at Levon walking! He is our sturdy little toddle-legged human. Maggie keeps saying, "Levon is so cute!" I do believe she may have heard this word a time or two in her life.
Another friend of Jessie's who has a little girl and a boy the same ages as Levon and August met us there and it's a bit tricky, catering to the needs of two one-year-olds, a two-year old, and two three-year-olds. But of course we visited the old caboose. 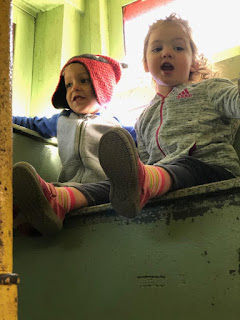 And the old schoolhouse. 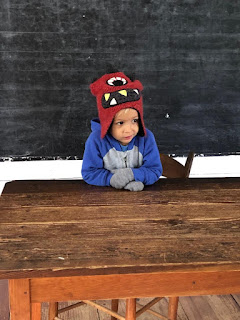 August ready to give a lecture on bulldozer-repair. Or Socratic Thought. Or strategies on winning the Iditarod. Or something.

We visited the snakes. 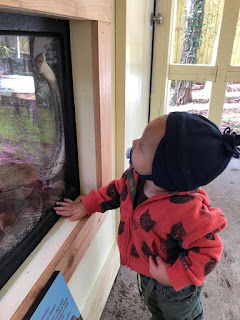 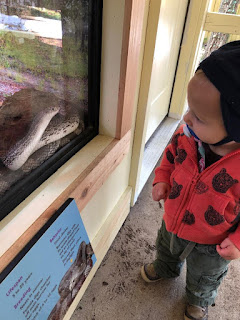 Levon and this oak snake (or was it a rat snake?) had some sort of Vulcan mind-warp communication going on. They were both fascinated by the other.

Our path into the animal habitats was blocked due to flooding and so we decided to let the kids play on the playground and eat our lunch. This we did. Much merriment and enjoyment. And then, suddenly, Lily began to feel not good. As in...her stomach was very much not happy.
What followed was the sudden onset of gastric symptoms and I drove us home, wishing desperately that I could do something to ease her distress. She may be a grown woman with three children of her own but I am still her mommy and and still feel that I need to DO SOMETHING to make things better.
I could do nothing to alleviate her discomfort but I could take Maggie and go pick up the boys at the bus stop and that's what I did. And then we came back to Lloyd where I think everyone had a very good time. Maggie played with toys and her dollies. Gibson and Owen played Wii. I short-order cooked, making everyone snacks. Maggie helped me collect the eggs and when she wanted me to cook her one, I did. 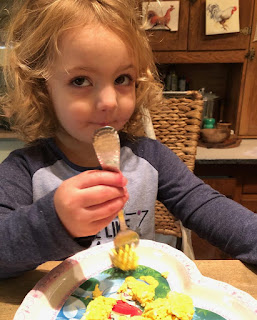 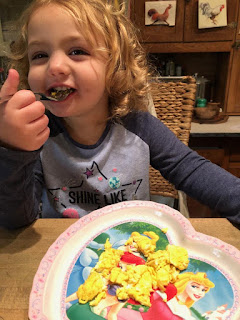 She liked it so much that she wanted another one and I cooked her another one because who could say no to Maggie when it comes to cooking an egg or two?

It was good to have the kids over for a few hours. I feel more and more like Owen and I are quite seriously bonded for life. We had some good conversations and he is pretty wise for a nine-year old child. We were sitting in the dining room at the table and I was shuffling a deck of cards for us to play Battle and I pointed at the baby-walker in there and said, "Well, I guess it's about time for me to get rid of that."
"You never know," he said. "May might have a baby or Jessie might have another."
"You're right," I told him. "But Vergil thinks they should only have two children."
"I've heard that," he said, as solemn as a fifty-year old. "But it seems like in these situations, the girl usually gets her way."
"You're right about that, dude," I said, as I started dealing the cards.

Jason came in before we really got very deep into our game but Owen was already whipping my butt. As he usually does. And so now they've gone home and before they left, I kissed all of them in the car and Maggie called me back for another hug and I so gladly gave it.
Mr. Moon has gone to a Ducks Unlimited dinner meeting in Tallahassee and tomorrow he is flying to Tennessee to go hunt with one of his oldest friends and will be driving back a car he bought for a customer on Monday. He's packed and will be leaving the house at four in the morning to fly out.

It's supposed to freeze tonight. Wasn't it so hot I didn't want to work outside about four days ago? Haha!
I've covered up the porch plants again.
I so hope that Lily feels better quickly.

Another thing that Owen and I talked about was how I used to help him learn his numbers with playing cards and how my grandmother used to do that with me.
"And so you're going to have to do that with your grandchildren," I told him.
"That's going to be a long time from now," he said. "Like fifty years."
"Yep,"' I told him. "And the time is going to go by so much faster than you can even believe."
"I know," he said.
But he doesn't.
But he will.