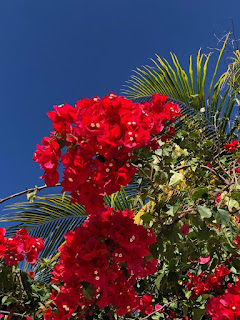 So, today was going to be the day to rent a car and after our breakfast we walked into town which may be two miles, I don't know, but it's a beautiful walk and this bougainvillea begged to have her picture taken, the scarlet against the blue sky. I mean...please.

We first wanted to exchange dollars for pesos as the exchange rate is extremely favorable right now and that took quite a bit of time. The banks are not doing exchanges for non-account holders for some reason and while Mr. Moon was in line at one of the banks not knowing this factoid, I struck up a conversation outside with a lovely man named Angelo who told me about the account thing and where we could go to exchange which was at the ferry dock and just then, Mr. Moon came out of the bank, frustrated, and I told him what Angelo had told me and so we were off to the ferry dock where we found the exchange place but they wanted his passport before the exchange could be made.
Sigh.
Mexico.
But then, a guy working a kiosk for a resort across the way stepped in and convinced the exchange lady to do it on his say with his own Mexican license and she did and there you go- two people who helped us out for absolutely no reason other than because they are nice people.
And this is why I love Cozumel.
After that, we walked to a car rental place but Mr. Moon is having a hard time agreeing to a lease because of a new thing involving something legal that I don't quite understand and I'm sure everyone else just signs the lease but he's like, "No. This is not fair."
So, we didn't get a car but we did go to a little hole in the wall restaurant for lunch called Burritos Gorditos where we got delicious burritos and this was the tip jar. 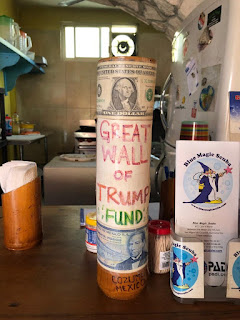 Timely and completely representational of the Mexican sense of humor.

By this time it was mid-afternoon and so we went to the grocery store, Chedraui, where we bought our staple supplies which are rum, cokes, limes, avocados, cookies, crackers, beer, cheese, a coffee pot, coffee, and coffee mugs. And where the traditional Christmas Tecate pyramid has been constructed, taking up about 1/8th of the entire huge store. 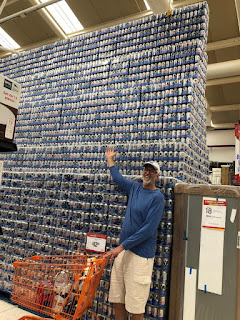 And remember- Mr. Moon is about six feet, nine inches tall and also, that picture probably shows half the length of this display.
I sent the picture to Lily who texted, "That looks insane and also dangerous."
I texted back, "Yes! It's Mexico!"

We got a taxi back to the hotel, unloaded our bounty, fed Bagheera some cheese, accepted her eternal allegiance, and took a nap. We got up, made coffee, played cards, and then watched the sunset which looked like this. 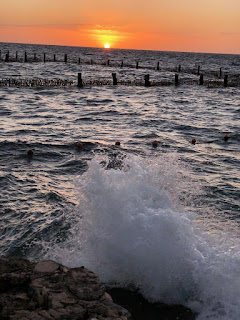 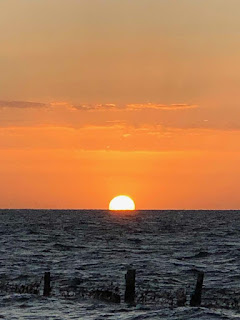 The wind is still howling and sending up sea spray, no one is diving, the children are indeed wearing parkas, we are wearing long sleeves, everyone is cheerful and friendly and we are having a beautiful time. I think what we've decided to do about the car rental thing is to rent a scooter which can be dangerous but which is insanely fun for use during the day, and to take taxis at night which are very reasonable in price and available everywhere and any time and provide opportunities for chatting with the drivers.

I'm quite sure that there was a lot more I was going to say but for now, I'm just going to say good-night. I am deliciously tired and looking forward to another night where I can hear the wind singing and the fronds of the palm trees rattling, the water crashing against the sea wall and the breathing of my husband beside me.
He and I are already in our vacation mode which is so precious and so loving. We laugh a lot, we talk a lot, we joke, we kiss, we express our love and we often find ourselves reading each other's minds.
It is a joy that we do not take for granted in any way.
We are so very lucky and we know it.