It's My Favorite Holiday Of The Year: Keithmas! 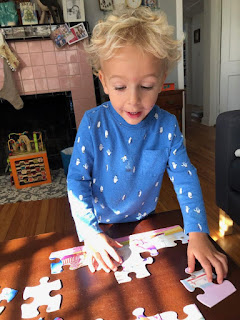 Well, I got the chance to stay with August and Levon and Maggie this morning for a little while and we had a lot of fun playing. Levon was asleep for a lot of the time but when he woke up, he was not too upset that I was there instead of his mother and besides, his brother was there as well as Magnolia who, every five minutes since she had arrived at the house had said, "I hear Levon! Let's go see him!" When he did wake up and fuss, I was the one who heard him with my old deaf grandmother ears and he shared some bagel with me and then his mother got back and all was perfectly and truly right with the world again.

The theme of today's pretending and playing was doctors. Maggie asked to play with August's doctor kit first thing and August happily shared it with her, even finding the doctor jacket. 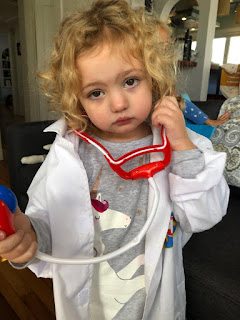 It's so important for your doctor to show empathy and caring, isn't it?

I was cared for tenderly and gently by Dr. M. When she went to take notes, she said, "What your name?"
"Mary," I said.
She looked at me as if I was insane.
"Mer Mer," I corrected myself.
She was relieved.
Then she asked August, "August, what your name?"
"August," he said, and she pretended to write on the clipboard that came with the set.

Soon both of the mamas were home and we all went to lunch and Mr. Moon joined us and so did one of our oldest and dearest friends as did Lauren, Lily's housemate who is now basically a part of the family. Hank and Rachel couldn't make it and May was working but still, there were plenty of us and we ate chips and salsa and all kinds of delicious Mexican foods, none of which much resembled anything Mr. Moon and I will be eating in two days but I am not judgey when it comes to Mexican food in all of its glorious forms.

After lunch I got some errands done, things to cross off the list. And tomorrow I must pack for real. I feel a bit dizzy and overwhelmed but I keep thinking about what Steve Reed said which was that really, as long as we have our passports, we'll be fine. It's not like Cozumel is in the deepest, darkest part of the Andean mountains or anything.

And all day long I have been thinking about this guy. 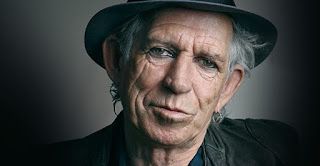 Keith Richards turns 75 today. Do you know how many times he was listed as the Rock-Star-Most-Likely-To-Die when he was in his twenties? A lot.
And here he is. Probably a great deal of credit goes to his wife, Patti Hansen. It is also their anniversary. 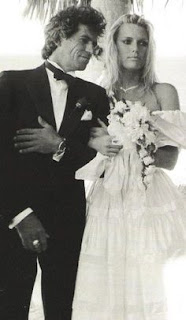 They've been married thirty-five years.
They sometimes say that a woman is the most beautiful she'll ever be on her wedding day.
I can't really comment on that in this case. Patti Hansen is simply gorgeous.
But I think that Keith was probably the most handsome he'll ever be on that day.
Here's what they looked like a few years ago in a Vogue shoot with some of their kids and grandkids. 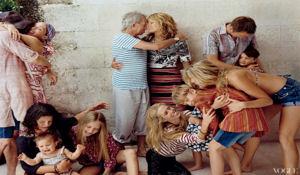 You know, I think they might have a successful marriage if they just keep working at it.

Gold rings on you.