It's been as gray as cement today and raining constantly but I've been in a good mood.
For one thing, I slept last night as soundly as I can ever remember sleeping in my life. I don't even remember closing my eyes and the next thing I knew, it was time to get up.
I decided to drive into town to get August and Levon's Christmas presents. I got Maggie's back in October when we went to Thomasville, Georgia and I ordered Owen and Gibson's online. I had asked August what he wanted for Boppie and Mer to get him for Christmas yesterday and the first thing he said was that he wanted a doctor kit for Levon so that he would stop playing with his.
"Well," I said. "I don't know about that. But what do YOU want?"
And then he proceeded to describe a car he would like and it needed to have a button that made it go and he showed me with his hands how big it should be. Etc.
One would think one could find a car with a button that makes it go, right?
One would be wrong.
I drove my cart up and down the toy aisles at Target but every car was either remote-controlled and/or was emblazoned with some cartoon character on it that he doesn't even know about. I ended up getting him a car you can take apart and put back together. It has no button but it does have a drill. Also, I got him a tractor (also with no button) which comes with a little trailer.
Simple toys.
I got Levon a toy that you hammer balls into and they go through some tunnels and stuff.
And that was that.

And then, Lord help me, I went back to the cosmetic store and I bought a ridiculously expensive and expansive eyeshadow palette. I should probably watch some Youtube videos or something on how to use this stuff. Not that it matters. 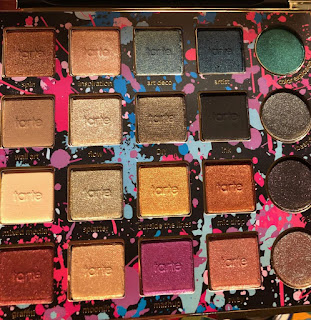 And let's face it- I'll never have to buy eyeshadow again IN MY LIFE!
Such a first-world comfort.
I feel like a kid who just got the 64-Crayolas box. And you know what? That's fun.
Fun.
Hmmm...
What a concept!

Cozumel has changed so much since we first went there thirty-one years ago. I swear, in those days it was just a very sleepy little diver's secret. There were probably about ten good restaurants, maybe twenty hotels ranging from two big ones on the beach down to a bunch of little in-town places you could stay for eighteen dollars a night, one amazing disco, and Carlos'n'Charlies which was the most rocking bar I ever visited in my life and it was wonderful. The park which is now huge and contains everything from a dolphinaria (UGH!) to a spa to smaller-sized reproductions of famous Mayan artworks and pyramids to a representative Mayan home and garden with a real, true Mayan woman who makes tortillas over a fire, used to be a place to snorkel and get food. Period.
I remember once when we visited, we had rented a jeep and as we were driving in, some Mexican police waved us down.
Uh-oh.
But no, everything was fine. They just wanted a ride into the park and we said sure and they jumped in the back of the jeep with their weapons and thanked us when they got out.

Those were the days.

Now there must be hundreds of restaurants and there are plenty of hotels and resorts. It's one of the world's most visited cruise destinations. At night in the zocalo, there is so much activity. Lights and music and businesses open, and where once it was mainly the local families who visited the square at night, now there are so many tourists and of course the businesses that cater to them.
But. In many ways it is still the same. The store that sells perfume and high-end cosmetics which was there in 1987 still stands on the corner by the sea walk and leaves its door open so that when you pass by it, the cold air and the scent of every good perfume on earth washes over you. Casa Denis, one of the first restaurants on the island still serves Mayan specialties including the world's best lime soup. On Sundays families still gather on the public beaches with food and drinks and children and grandparents. The west side of the island is still without electricity and the beach bars there have the best fried fish I've ever eaten. If you go a few blocks from the ocean into the neighborhoods, you can still find the same grocery stores we visited thirty years ago, find the same little taquerias. The mercado still sells everything in the world from freshly butchered meat to pretty flouncy dresses for little girls and the lunch counters there are amazing. There is fresh fruit and there are fresh vegetables. There's a little booth where you can buy your spells and candles and others where you can find kitchen ware and basic pottery and cheap toys. There is the altar at the main entrance where a statue of the Virgin of Guadalupe stands, candles surrounding her. And of course there is eternally (for now, at least) the water of eight colors, the incomparable sunsets where it always seems to me that the Mayan gods make appearances in the clouds, the coming-in at night of the dive boats, the clanking of tanks in the mornings as those same boats go out, the sight of mopeds being ridden by four family members and a baby at one time, the smell of lime and of fish, of garlic and of Fabuloso and most of all, there are still the Mayan people although now they carry cell phones. They still call out to my husband, "Hello, Shorty!" and "Hola, Senior Whiskers!" and "Do you want a free jeep?"
And they are so kind and at night the church-without-walls holds mass and the people come and sit and pray and the priest does his priestly magic stuff and the old, old women sit in the pews covered with their rebozos and I can't even imagine what their lives have been like. Are like.

As the time for us to leave grows close, I am drifting back there. I find it harder and harder to concentrate on the here and now of my life in Lloyd. I have always felt as if perhaps I live in a parallel universe in Cozumel and when I visit, those universes come together in a way, bumpy and uneven at times, but always with a feeling of my heart being exactly where it is supposed to be.

I have five days to finish preparing to go and to pack.
It is Friday night. It is pouring rain now. A week from tonight I will be staying in a hotel on the water. It is an older hotel. It is not huge. There is a lovely small pool, there is a dock where the dive boats tie-up and where I often watch the sunset. There is a restaurant where we take our breakfasts which overlooks the water. There is decent snorkeling. There is a cat named Bagheera and a dog named Lahlo who welcome everyone and often visit the rooms. There are birds that whistle and tweet in the palm trees from which the hammocks are strung where one can take a book and read in the shade until, without fail, eyes close and a nap is taken.

But right now, I am here and it's time to go cook our supper.