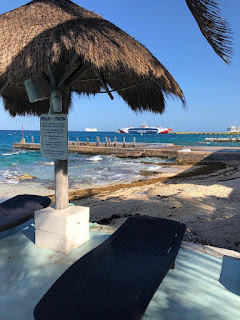 The color of the water here is absolutely indescribable and the camera just cannot do it justice. It is still quite windy today- a nor'easter, we are calling it. But if you get one street off the water, it is calm and the sky is cloudless and it is also cool- something I am not used to here.
But it's no problem because there's no snorkeling today anyway. The sea is too rough.

Speaking of rough- yesterday was not an easy day.
We got up at 3:45 a.m. and got to the airport way too early but better too early than too late.
The first flight from Tallahassee to Miami was fine although it was a smaller plane and Mr. Moon absolutely would not fit in a regular seat and another flyer had to trade a bulkhead seat so that he be seated for the flight. The flight from Miami to Cozumel was also in a small plane but he could, just barely, manage to get those legs of his in a position where he'd fit. And we got to sit together which was good because we hit some turbulence that absolutely gave me a taste of what terror might feel like. We dropped, as in the whole plane, and it is a strange feeling to find your ass above the seat, an unwelcome weightlessness with things flying about and although the whole worst part of it only lasted for maybe twenty seconds, I had plenty of time to think many thoughts including, "Well, this could be how it ends," and, strangely I realized that even if, even if... I could possibly control how I acted in such a moment. I put my hand on my husband's leg and he reached over and held it and no one screamed and in a few heartbeats, all was righted and well.

And on we flew over the clouds and in the clouds and occasionally the clouds would break and we could see the blue Caribbean below us, so far below us and then suddenly, there it was, Cozumel and we were flying over the jungle (so much jungle) green, green, green and once again, the tears came and I cried so hard, but silently, my body shaking with them and I am crying again now, writing this. And then we landed and there we were and here we are.

When we got to the hotel, Sergio, the man who works in the restaurant here was waiting for his ride and he welcomed us and I began to cry again and he hugged me and said he was glad we were back. And guess who else was waiting for us at the desk? 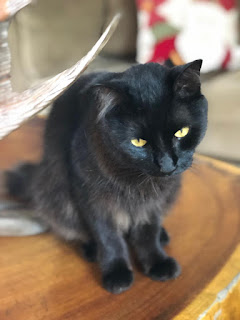 Where have you been? she asked and then pretended not to care at all and a few minutes later she was chasing a pit bull teenager around the grounds like the panther she was named after and the dog was crying and yelping and human help had to be employed and it was great.

And right now we have had a good night's sleep and a fine breakfast and we're going into town to see if we can rent a car which is always a very good exercise for me in being Zen about things as my husband reads every line of every contract and it is, to say the least, a time-consuming process. But, hey! We're in Mexico and thank god. Even here I can't get away from the news. Although I am trying not to pay any attention. 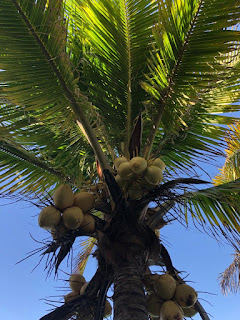