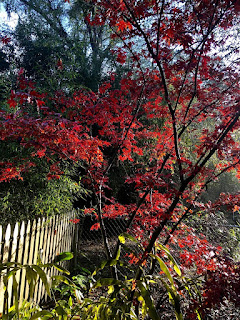 When I woke up this morning, the sun was actually and truly shining. In fact, it was illuminating the little Japanese Maple tree in my back yard. That is not the greatest shot in the world but you can get an idea. Here's another and again, not a good photo but you can see the light in the leaves. 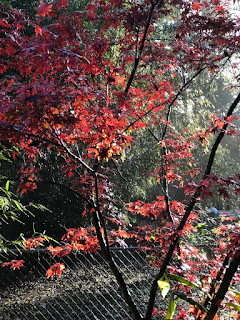 I had not seen any of my grandchildren since Friday so of course I had to see them today. We concocted a trip to Costco because you ALWAYS need something at Costco, even if it's just a ten-gallon-sized bag of onions or a giant block of cheese.
Am I right?
So I met Jessie and the boys and Lily and Maggie and we got two carts. One for the children (Levon was asleep in his car seat carrier) and one for actual groceries. Maggie and August were delighted to see each other and wanted very much to sit together and so they did. 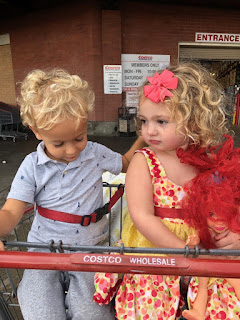 Are they not the most gorgeous of children? 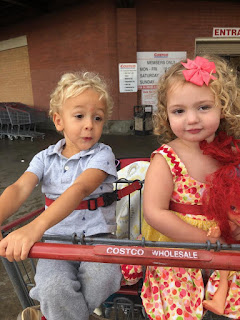 Together their cuteness quotient seems to multiply by five hundred percent. Their conversations, their interactions are the most precious things I've ever seen in my life. 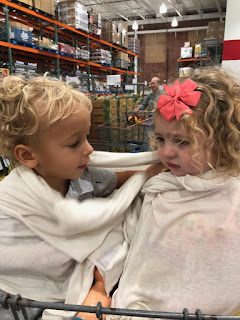 Before we went into the coldy room, I wrapped them up in my sweater. August was helping Maggie cover up and I'm not sure what Ms. Mags was upset about. Something. She got over it.
It is one of the greatest joys I have ever known to be a part of these children's lives. It is a sweetness that I never expected nor imagined possible. The love I feel for all of my grandchildren is so often overwhelming that I don't quite know what to do with it. And yet, it's different than what I felt for my own children which was also astonishing to me in its depths and reality. I can't explain it but sometimes I feel as if I was put here on earth to absolutely fill each one of them with as much love as I can while I am here. Ideally, enough to last their lifetimes. As a parent, I was so busy simply taking care of the children's daily needs, the unceasing scheduling of trying to keep a home, of feeding everyone, of getting everyone where they needed to be, of providing for immediate needs of love and attention, of doing laundry and tending to sick kids and attending teacher-parent conferences and the endless lessons and performances and competitions of ballet and karate and softball and volunteering in their classrooms and just trying to be a halfway decent mother (which I never felt as if I was even halfway capable of) that sometimes I missed the pure, holy miracle of watching them grow and develop into themselves and change and become exactly who they were.
But with my grandchildren, I have the perspective and the leisure, too, to observe, to note, to cherish, to encourage, to have fun with, to sit down any time to read a book with, to have long, deep conversations, to mostly just love and sometimes to spoil and make them feel as if they are the princes and princess of my world.
And it is glorious.

We went to Japanica. August wanted extra tofu in his miso soup. And he got it. 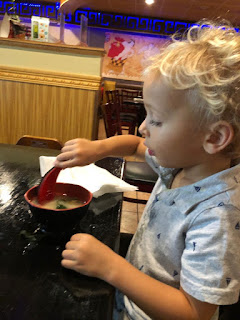 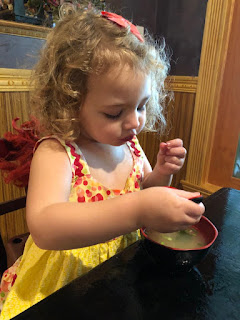 Maggie loved her soup too but was happy with the regular amount of tofu. 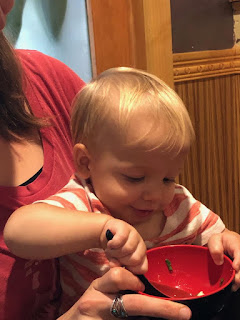 Levon? If it's food, he wants it. And he wants to do it himself.

After our lunches, we went into Big Lots for Jessie to check out the mattresses. Vergil is making the boys bunk beds and soon they will be ready for the mattress part of the situation. And then we went to the Goodwill bookstore where I must admit I let the mommies take care of the babies while I drifted about the store looking for books to take to Mexico. At one point I heard one of my daughters say, "Where's Mom?"
"She's deserted us," said the other daughter.
This, too, is part of being a grandmother. I can let the mothers deal with their children while I make myself scarce.
It does not suck.

And so that was my day.
Oh! I forgot to mention my trip to the post office where my bathing suit did arrive. It fits in that it is made of stretchy stuff and contains my body in a modest way, although I look like hell in it. Let's face it- I would look like hell in anything. So. Whatever. I'll keep it.
Not only was my bathing suit delivered, but also a meat grinder which Mr. Moon had ordered for processing deer meat and making sausage.
The post mistress hefted the box it was in to the window and said, "I'm not sure this is going to fit through."
It did. But my god that thing was heavy.
I insisted that I could carry it and so I did. But I have to tell you that before I even got to the door I was thinking, "I really should not be doing this."
It's huge. It's made of lead. Or something professional. Definitely not plastic.
And now it's unboxed and gleaming, sitting on my kitchen island and I have a feeling that my kitchen is never going to be quite the same again. Mr. Moon is actually planning on making sausage tonight. It's seven o'clock. He will be up until the wee hours.
Trust me.
He's watched the video and knows what he's doing.
God love him.
I do.

And one more picture. 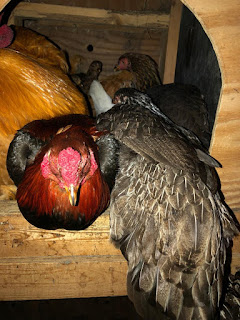 This is ONE of the nests in the hen house where the chickens roost. I have eleven grown chickens and eight (hopefully) young ones. There are six nests in that hen house. And in this one nest there are six mature chickens including Liberace who is huge AND the eight chicks.

Sometimes I think that chicken life is so much simpler than human life.
And then something like this happens and I realize that it's not really simple for any of us here on this planet and that is what it makes it all so beautifully mysterious and endlessly curious.