The Dregs Of Summer Ennui 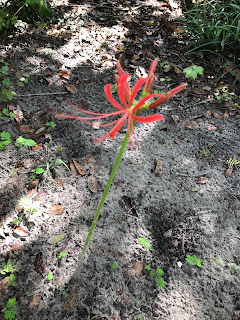 That is one of the worst pictures I've ever taken but there you have it- the first hurricane lily of the season that I've seen in my yard. It's bloom isn't fully opened yet but it will be soon and I feel certain that many more will be popping up here in the expected and unexpected places. I also noticed that the first blooms of the firespike are beginning to turn scarlet. Since I moved here, I have rooted and planted many firespike plants but I get no real credit for that. I did not realize how easy they were to root until I cut some one fall when they were at the glory of their blooms and put them in a vase of water and realized about a month later that not only were they still alive, but that they had sent out roots in the vase and I just kept them there until the danger of frost was over and then planted them and they did great and I realized that this is a plant which longs to live and the hummingbirds love them and why not?

Here's another thing that happened today: 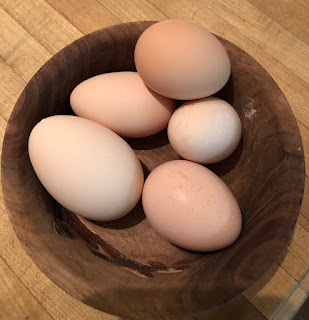 I got five eggs! All of them from a nest. Can you see how each one of them is different in shade, shape, and size? I am still waiting with huge anticipation to see what color eggs Pansy and Eggy Tina will lay.

And those were the two most exciting events that happened in my life today.
Without a doubt.
This is sort of sad, isn't it?
I've just felt aimless and a bit listless. I did go to the grocery store and I swear, it took me forever to figure out the simplest things. First of all, I had to decide what to cook for supper. I am just so absolutely OVER making that decision. I don't mind cooking the supper at all. I enjoy that, in fact. But trying to decide what to cook is killing me. I know I am not alone in this.
I have probably been on the deciding and cooking end of suppers for at least forty years. Yep. You read that right. Forty years of cooking supper for me and others, often having to respect and incorporate the different dietary needs and choices of others and of myself. I can cook vegetarian, vegan, low-fat, no-sugar, no-white flour, etc, etc, etc.
I can cook Southern, I can cook hippie. I can cook Southern-hippie! I can cook soul and simple and clean and occasionally I can cook fairly damn gourmet. I can cook game and I can cook fish brought home from the seas. I can do casseroles and I can do soups. I can cook fifties housewife and update it to make it healthy.
I really can cook.
But sometimes...Jesus.
So I finally decided in Publix that tonight we are having trashy tacos with ground venison. I made these a few months ago and they were so delicious that I haven't forgotten how much we loved them. El Paso taco seasoning will be involved.
I decided at the store that since I had tortillas in the cabinet I would use those instead of the actual crunchy fried taco shells which was probably a mistake. When I got home and checked the expiration date on them I discovered that they had expired quite awhile ago but I am hoping for the best.
Fuck it. I doubt we'll die.
We are also going to have canned chili beans and packaged Mexican rice mix.
Father forgive me. I have sinned.
Or will have sinned.
If I open the tortillas and discover that they are too old and inedible, I will send Mr. Moon down to the convenience store to buy tortilla chips and we will have nachos.

I have no shame and I am not ashamed.

Oh dammit. I forgot to buy sour cream. I do have some nice Greek yogurt and we can use that but it's so...healthy.
Oh well.

Some days are just best regarded as write-offs.

Oh my god. I just saw Liberace have two-second sex with either Viv or Vera.

Tomorrow? Brunch with the kiddies. I haven't seen Owen in at least a week and a half. He's probably taller than I am now.