Listening To That Which Is Real, Including A Podcast With Billy 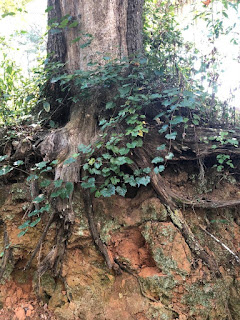 When I was walking two days ago I thought about all of the wonderful hollowed out places I pass where different animals no doubt live but where I always feel a presence of spirit too.
Or spirits.
What do I know?
Of course I have no religion- that is part of who I am. But that doesn't mean I don't believe in certain things and I've discussed them many times before. The Pragmatic Miracles, as I like to call them which are the ones science can explain and often readily explain like birth and death and dirt and sun and water and light and love.
Well, maybe science hasn't quite got that last one figured out yet, depending on your definition of it and mine is pretty vast.
But in the woods, or walking down a road which is lined with trees and banks of clay where these hollowed out places occur, I often sense a sort of presence which emanates from those hollowed out spaces and which linger there. 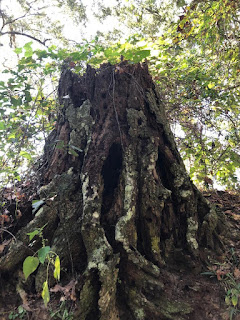 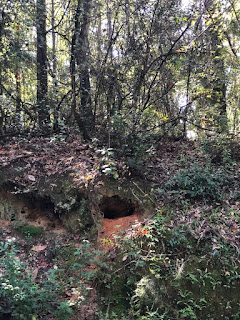 These are not sinister spirits in any way and I feel them as friendly, as protective, or at the very least benign and unconcerned with my presence.

So on Wednesday I took some pictures of some of the places where I feel that these spirits reside and I would never have seen this little skinky guy if I hadn't been doing that. 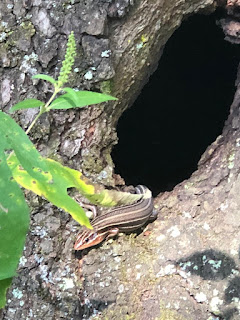 These places are one of the reasons that it is so good for me to get out and walk and it is of great importance that during these times of such unholy despair and obvious wrong-doing that I remind myself of what is real and yes, I can see the irony of saying that the spirits which live in hollowed out trees and banks is real while the machinations of Washington are not.
So be it. 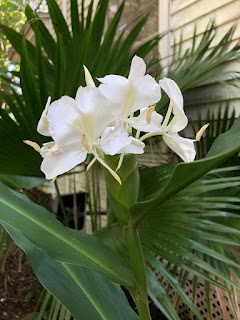 I actually got out into my yard for a little trimming up and pulling of invasives today. I didn't last long. It's still so very hot. But there is so much to love about my yard with its oak trees, its little sacred spaces, its flowers. The ones above are the butterfly ginger lily and they smell heavenly. Like the armpits of angels, I am sure. 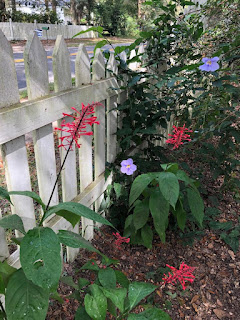 After yesterday's breakdown (what else could I call it?) I simply had to let go that which I could not control and sweat a little and get dirty doing some of what I can. Self-care is a very popular term and concept these days and despite the Puritan grandfather's blood which fills my body, even I recognize that sometimes it's important to take care of one's self even if that means working in the yard rather than getting a pedicure and it is also important to love one's self as I would want to love all of the women (and men) who were re-victimized by yesterday's horrible performance of the big angry cry baby who had been shamed by quiet truth and the old, entitled white men who support him.

Enough of that for now. As I said, I cannot control any of it. I can only live my life with as much joy as I can muster and in taking care of myself, I am saying fuck you! to the molesters. You will not ruin my life, motherfuckers. You will not.
I have love. That incredible force which I don't think we humans can begin to define but which I know is there, is here, is within me and without me. We could call it grace if wanted. And I have felt it today.

Speaking of love, today is Billy's birthday. Many of you know who Billy is and for those of you who do not, I can only say that if you do a search on my blog for him, you will begin to get to know him. Here's a picture of him and his son, Waylon. 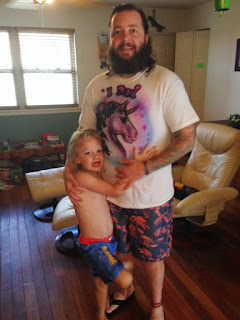 I don't get to see Billy as often as I would like or his beautiful and beloved wife Shayla, either. Or their boy Waylon. But occasionally Billy and I will have a marathon text session which goes on for hours and we did that two nights ago and then yesterday, when we were at Midtown Pies celebrating Lily's birthday, who should walk in but Billy himself and his friend Dylan? 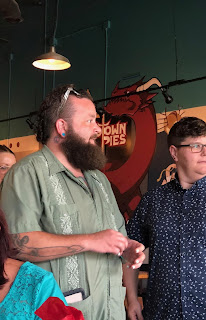 It was awesome!
And I had just listened to a podcast that Billy and Dylan had done recently for Dylan's podcast, the Double D. You can find it HERE.
It's just a conversation between two very old and dear friends (although neither of them are old) and it starts out with Real Housewives of New Jersey and goes well into the range of what it means and what it's like to be queer in the south. It's funny as hell and it's profound and, well, it's Billy.

Happy birthday, Billy. Ain't nobody like you on this earth.

All right, y'all. It's Friday night and I wish you all a good one. Let's take care of ourselves and love each other and let's not forget that love includes loving ourselves even though just saying that sort of makes me cringe.
If I can try, so can you.
And fuck the patriarchy who is not allowed to tell us that we are not worthy of that love.
And also, get outside and find a tree spirit and sit with it for awhile if you can. I swear you will feel better. If nothing else, the wind (which is also invisible but very real) will talk to you through the leaves of that tree. I can honestly guarantee you that.