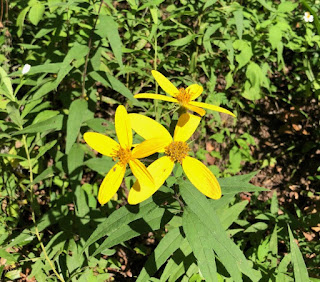 For all my discussion of the heat yesterday I still got out and walked this morning, stubborn to the core that goddammit, I was going to get ten miles in this week or know the reason why. So I had three miles to walk and no big deal. And oh, y'all. It IS so beautiful to be out under those massive oaks, to see all of the wildflowers and the butterflies which are just bountiful, dipping and sipping, the small ones, the large ones, swooping and darting and floating about, almost a storm of them in some places, like jewel-colored falling leaves, like a dream.
But when I got home I could barely move. I'd gotten so hot and the day ended up being made of not much, just very slow things done here and there. The sheets and the clothes did get hung on the line and the kitchen all cleaned up and tidy and some floors swept but by two-thirty I just took a shower and then laid down on my bed in front of the fan and couldn't even keep my eyes open.
And yes, I've drunk plenty of water today.
Probably quarts.
So I've been lazy but I don't care and I think that from now until this heat breaks I am only going to go out in the early morning and after that I am not going to do a damn thing outside that takes more than fifteen minutes at the most.

Jessie sent me a video last night of Levon who is learning to clap his hands and who thinks that this is absolutely the most hysterical thing in the world.

And August makes a cameo appearance.

That boy called me this afternoon. He was so excited. He'd found a marble in the yard. I have some marbles that I keep in a bowl which I found in this yard and he loves to play with them. 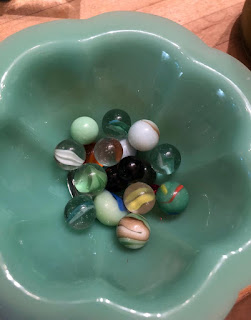 So he was very proud that he now has his own marble. He has it wrapped in cloth and tied with a rubber band so that Levon can't swallow it. And he asked me if I'd made his dress yet. I told him that no, but I will start on it tomorrow. He said, "Why?"
I told him about being hot and lazy and he seemed satisfied with that explanation.

And so it goes and here we are and a martini is being drunk and please don't bother to tell me that alcohol is not an approved hydration fluid. I was a nurse. I know that.

In Lloyd news, yesterday my county commissioner called me to update me on the situation I had alerted her to about a trashed-out trailer parked in the old parking lot of a no-longer-there gas station by the interstate and I loved that she did that. She apologized about how long it's taking them to do anything about it. It turns out that someone from Georgia pulled that thing down here and dumped it. It would cost the city a ton of money to haul it off and Jefferson County has no money but they're trying to figure it out.
"I think they should just pull it to the middle of the parking lot and set it on fire," she said.
"I've thought the same thing," I told her. "But I doubt that's legal."
We both laughed.

This morning I ran into our old post mistress at the...wait for it...post office, and as we stood there and discussed stuff she tried to fan me with her mail because I'd just finished my walk and no doubt looked like I was about to die of heat stroke. This is the woman who came by my house once with some of her sister Jehovah's Witnesses and when I tried, as gently as possible, to tell them that I had no interest at all, said, "Oh, Mary! You have such a good heart!"
This is also the woman who goes to her mother-in-law's house right down the road four times a day (FOUR TIMES A DAY!) to cook and do a little house keeping for her.
Talk about hearts.

And finally, the little store at the corner which has been empty for years has been sold to a couple who live in Tallahassee and they plan to fix it up and the wife is going to sell arts and crafts out of it which I think is about the funniest thing I've ever heard. First of all, that building needs to be knocked down as it's falling in on top of itself and secondly- arts and crafts in Lloyd?
Maybe she'll have a sideline in ballet slippers.
Oh well. God love the people with dreams.
We all have them. And who am I to say this one can't come true?