Seriously, Fall? Where The Fuck Are You? 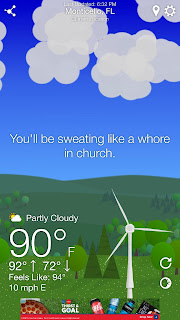 Well, first day of fall and I am sweating like a whore in church, thank you very much.
And yeah, that's probably a very disrespectful thing to call sex-workers or to say about sex-workers who should NOT be disrespected in my opinion but sometimes I'm just an asshole and that's all there is to it. 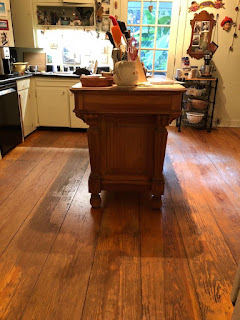 I've posted pictures like this before and yes, that's a picture of what a clean kitchen floor looks like in my house and yes, I am the kind of person who mops her floors so infrequently that she feels she must take a picture of it when she does. And then post the picture on her blog.
But that's me!
So the other night when Mr. Moon came to bed he informed me that there had been a dead mouse under the bathroom rug and that he had stepped on it, not realizing it was there when he got out of the shower. And that I shouldn't worry because he had dealt with the dead mouse and had put the rug in the laundry basket and had cleaned up the floor.
Thanks, Maurice! I had heard her earlier, making her keening victory battle cry earlier but had chosen to ignore it and thank god because I would have had to deal with all that crap. But you know and I know and even Mr. Moon admitted, a very tired man who has just taken a shower might not do the best job cleaning up a floor after such an incident and although there was no physical evidence of the situation, I thought it best to go ahead and mop with the magically cleansing potion of water, Fabuloso and vinegar. Not that the kitchen floor which is adjacent to that bathroom floor needed it or anything.
HahahahahahahahahahahahahaHAH!
But now I am sure that I could do surgery on that floor and all would be well because...Fabuloso! Vinegar!
And yes, I washed the rug and hung it outside to bake in the overly hot and disinfecting sun all day long.
So we're good.

You know what else I did today?
NOTHING!
That is right. Not one damn thing. Mr. Moon has gone to Georgia to his hunting camp to check his trail cam and perhaps hunt (archery season) in the morning and to see his friends, one of whom has recently had a scary medical diagnosis. And for some reason, when he left today, I just gave myself the day off. I spent too much time online, I laid on the bed and read. I took a nap.
We don't even need to discuss the fabulous breakfast I made for myself around eleven o'clock this morning.
You know what I don't understand?
People who say, "It's just me. Why should I cook? I eat cereal for supper."
Hell. I don't even eat cereal for breakfast.
So yeah. I ate some pretzel crackers and dried pineapple for a very late lunch but I had that wonderfully delicious breakfast and I am going to make myself a very nice supper, too. Then again, I do really love to cook but mostly, I just really love to eat. And if I'm not worth cooking for, then who is?
But no, I do not set a table with a lace tablecloth and a candle nor do I put Vivaldi on the stereo when I sit down to eat alone. I watch stuff on TV that Mr. Moon would not necessarily enjoy.
Call The Midwife may be involved.
Or The Real Housewives of Somewhere.
Depending.

I hope you've had a lovely first day of fall. I certainly have and the miracle of it is that I don't feel in the least guilty for not accomplishing anything of importance at all and for not suffering in my martyr-ly way. I neither feel depressed nor anxious, not even about throwing some leftovers out to the chickens that were still perfectly good but which I did not want to eat.

A rare and fine day. And my house and hands smell deliciously of Fabuloso and white vinegar.
Mmmmmmm....

Time to go close up the hen house.