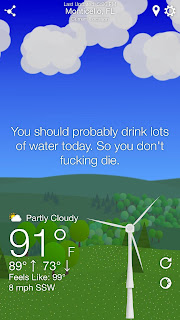 You might as well go ahead and get tired of my screen shots from the WTForecast app because they amuse me and right now if there is anything about this heat that I can find which is amusing, I'm going to run with it. What is this? Third day of fall? Yeah?
Whatever.
I did go out and walk a little this morning because some mornings when I wake up my soul is so low that nothing in this world feels cheerful or positive or good. And I am quite aware that this is complete horseshit but it feels as real as real and I have learned over the years that a decent walk can help with that more than anything I know. And I'm never sorry I went.
Unless of course I walk too far and come home in heat exhaustion but I'm trying real hard to keep that under control.
How could walking on a road that looks like this not be uplifting? 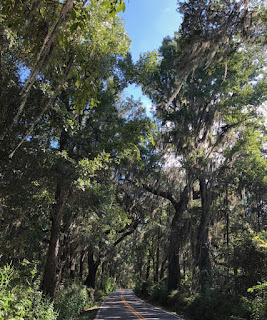 It just is. And there are always birds and flowers and sometimes even a little breeze. This morning I saw a hawk snatch a squirrel from a tree, land on the road in front of me to adjust his grip on the poor little critter and then soar off with his breakfast clutched in his talons. I saw more wild turkeys and I saw butterflies.

I determined today that I needed to go visit Target to get some of this birthday stuff out of the way. I procrastinated as long as I could, hanging clothes on the line and checking on Miss Darla. 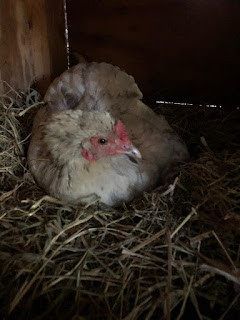 She's sitting tight and giving me the side eye. Bless her little heart. It's got to be hell in that hen house with the heat the way it is. I think that tomorrow I'll put a waterer in that nest along with her. I know that hen's are physiologically designed to go through these times of extended fasting of both water and food but it's not spring in New Hampshire here, people.

Heres's yet another picture of her sister, Dottie, attempting to do the Vulcan Mind Meld with me to get me to give her some cat food. 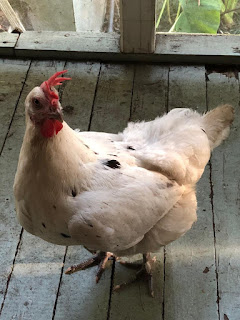 She just stands there and stares at me until I give her some or I make it clear that she's already had her ration of Publix meow mix for the day and she needs to go scratch up a grub or something.

Anyway, I did finally go to Target and I have to say that Target's been going down hill ever since they got rid of the garden section. Oh, the awesome exotic plants I used to find there for cheap! The succulents, the palms, the ferns, the herbs, the BEGONIAS! It was heaven.
No more. All gone. Oh, you can buy all the garden gnomes you want but no garden gnome on earth is going to get me as excited as a variety of begonia I've never seen before.
So I did what you do in Target which is to walk around with a cart and forget why you're there and then remember and try to find stuff that'll fulfill your needs and I did some of that. It took me approximately forty-five minutes to pick out birthday cards. I'd rather change a tire on the side of the interstate than pick out cards. It took me so long that the lady stocking them finally asked if she could help me and THIS IS NOT THE FIRST TIME THIS HAS EVER HAPPENED!
So I got the cards and I got Lily a present and I got a few other things and what I have to say about Target is that it's a planetary mind and money suck and I almost passed out when I got to the part of the trip where I had to pay.

Then I ran by Jessie's because she had offered to give me two eggs which she felt quite sure had been fertilized. Her rooster, Dewey Cox (or is it Cocks in this case?) is a sex machine so the odds are good that the eggs she's getting could indeed become chicks. I got to hold and kiss Levon but August was being taken on a walk by his daddy to get him to go to sleep for a nap so it was pretty much just a drive-by. I brought the eggs home and tucked them under Darla and she pecked at me but I'm sure she's settled them underneath her right where she wants them. Hens don't care who laid the eggs they sit on. When it's time to sit on eggs, they sit on eggs and that is that.

Clothes off the line, folded and put away, bread on its second rise. I'm going to heat up the posole we had the other night which was delicious and make a salad with the amazing and miraculous arugula which continues, despite the heat and the lack of rain in the past few weeks, to regenerate itself daily and which has proven to be the most prolific, delicious, and appreciated thing I've never intentionally grown. I know I keep talking about this stuff but I've never had a green from my garden which has produced all summer long and this arugula is not only incredibly heat tolerant and as green and strong as The Hulk when angered, it is absolutely the best-tasting arugula I've ever had. It is peppery, it is snappy, it is perfect in salads whether they are made with tomatoes and cucumbers or apples and pears and grapes and blueberries. 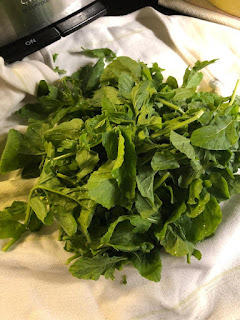 I made a salad of it the other night with diced pears and blue cheese and toasted pecans with a ginger dressing and it was one of the best things I've ever eaten. Anywhere.
You can bet I'm going to let those plants bolt and try to gather the seeds.
Will they bolt?
Who knows?
Greens always bolt in the heat and if this heat hasn't been enough to make them go to seed yet, I don't know what it would take.

Drink your water, people. I don't want you to fucking die.